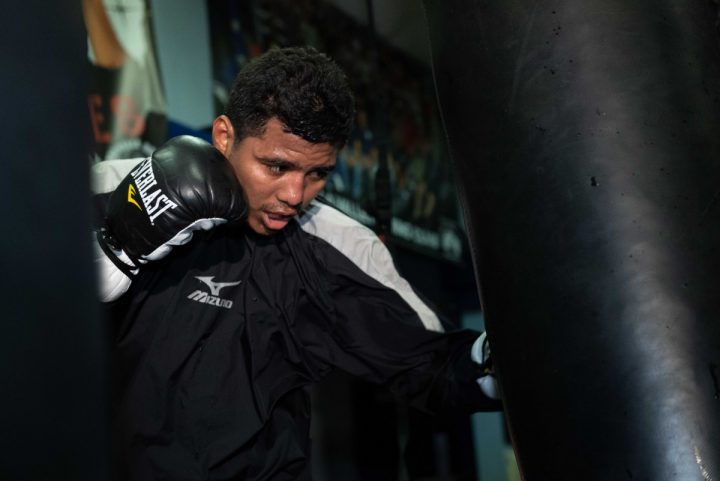 Four-Division Pound for Pound World Champion Roman ‘Chocolatito’ Gonzalez, (47-2, 39 KOs), is training in Coachella, CA for his return to action against former world champion Pedro ‘Jibran’ Guevara (32-3-1, 19 KOs), in the 10-round super flyweight co-main event at UNDISPUTED set for Saturday, December 8 at the StubHub Center. The event will be televised live on HBO Boxing After Dark® beginning at 10:20 p.m. ET/PT.

“I love training here in Coachella, the air is clean and it’s very quiet,” said Gonzalez. “I’ve trained here before; the sparring is great and the facilities are just what I need to prepare myself for victory.”

“Guevara is a very strong fighter, he was already a world champion and wants to return to the that status,” Gonzalez said. “I’ve always respected my opponents, for me it’s important to train very hard and really let me hands go in the fight like I did in my last fight against Fuentes and I got the knockout.”

“I felt very good against Fuentes, the training camp for that fight was perfect. As long as my training camps go smoothly I feel that anything is possible.”

defending her titles against two-time world title challenger, Aleksandra Magdziak-Lopes, (18-4-3, 1 KO), a native of Gilwice, Poland, now based in Marshfield, MA in the ten-round main event.

Presented by Tom Loeffler’s 360 Boxing Promotions, advance tickets priced at $25, $50, $100 and $150 can be purchased through AXS HERE .The StubHub Center is located at 18400 Avalon Boulevard, Carson, CA 90746. For more information please visit their website at www.StubHubCenter.com.

Returning to battle less than three months after a knockout victory, Roman ‘Chocolatito’ Gonzalez looks to continue on his path towards a fifth world title. On September 15, 2018, the hard-hitting Nicaraguan dismantled Moises Fuentes with a ‘Knockout of the Year’ stoppage in the fifth round on the HBO Pay-Per-View Undercard of the World Middleweight Championship between Gennady Golovkin and Canelo Alvarez.

Gonzalez has held world titles in four weight divisions; minimum weight, junior flyweight, flyweight and super flyweight. From September 12, 2015 to March 18, 2017, he was the Consensus #1 Pound-for-Pound Fighter in the World.

The 29-year-old Guevara first became a world champion on December 30, 2014 with a seventh-round knockout of Akira Yaegashi in Tokyo, Japan, winning the vacant WBC Junior Flyweight World Title. After making two successful defenses in Mexico, Guevara would return to Japan losing a split-decision to Yu Kimura on November 28, 2015.

In 2018, Guevara has recorded two stoppage victories, an eighth-round knockout of Angel Guevara on May 18, 2018 followed by a tenth-round stoppage of Roberto Sanchez on September 1, 2018.