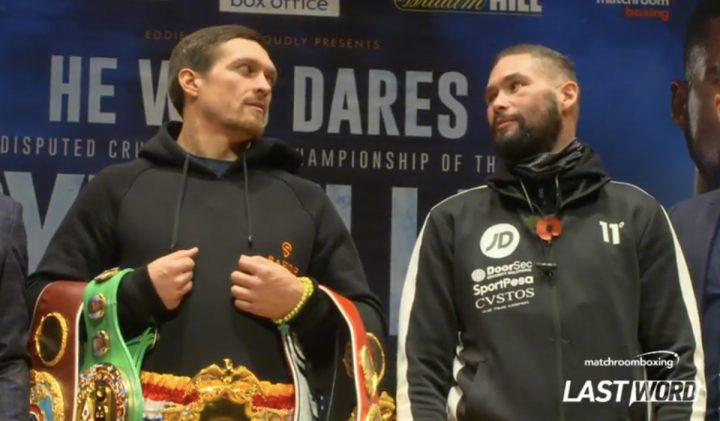 By Scott Gilfoid: IBF/WBA/WBC/WBO cruiserweight champion Oleksandr Usyk (15-0, 11 KOs) says he’s noticed how angry WBC emeritus champion Tony Bellew (30-2-1, 20 KOs), but he’s not worried about it. Usyk says he will defend his four titles and keep them at the Manchester Arena in Manchester, England.

Usyk doesn’t care about Bellew’s angry moods and menacing looks that he’s been giving him since their November 10 fight was signed. This is a sport for Usyk, not a staring contest or a trash talking game. Boxing is seen as an athletic competition to Usyk. It’s not a game of intimidation.

Bellew will be challenging the unbeaten Usyk this Saturday night on November 10 on Sky Box Office pay-per-view in the UK, and DAZN in the United States.

“I’m very excited to be fighting in England. Look in his eyes. He’s very angry,” Usyk said. I’ll perform to my ability and retain my titles”

Usyk is delaying his career in staying at cruiserweight needlessly just to defend his four titles against a fighter that is arguably the 8th best in the division. Bellew is clearly not the #1 or even the #4 best fighter in the division. Usyk is delaying his move up to heavyweight by fighting a guy that likely would have been wiped out in the quarterfinal of the recent World Boxing Super Series cruiserweight tournament earlier this year in Bellew if he had participated. Bellew’s promoter Eddie Hearn chose instead to match him up against David Haye rather than have him risk his neck fighting against the top talents in the cruiserweight division.

It’s too bad that Bellew is so angry with Usyk. I mean, Bellew wanted the fight with the 31-year-old Usyk despite him giving up the belt two years ago in order to fight David Haye. Usyk threw Bellew a bone by giving him the title shot. He didn’t need to do this. Usyk could have told Bellew to go kick rocks. It doesn’t do Usyk any

What hasn’t been talked about is the question of Bellew making weight on Friday. Bellew will need to make the 200 lb cruiserweight limit for the weigh-in on Friday, and as chunky as he looked for today’s final press conference, it’s unclear whether he can do that. Bellew’s body is still looking pear-shaped, as if he’s carrying around a lot of fat around his midsection It won’t be surprising if Bellew fails to make weight, although it’s unclear whether he cares about winning the four belts from Usyk. It looks like Bellew’s main objective is to beat Usyk so that he can have bragging rights as the only fighter to defeat him. Bellew failing to make weight on Friday would look bad in the eyes of the hardcore boxing fans that keep track of stuff like that, but not to the casual fans. The casual fans wouldn’t give a fig if Bellew fails to make weight.