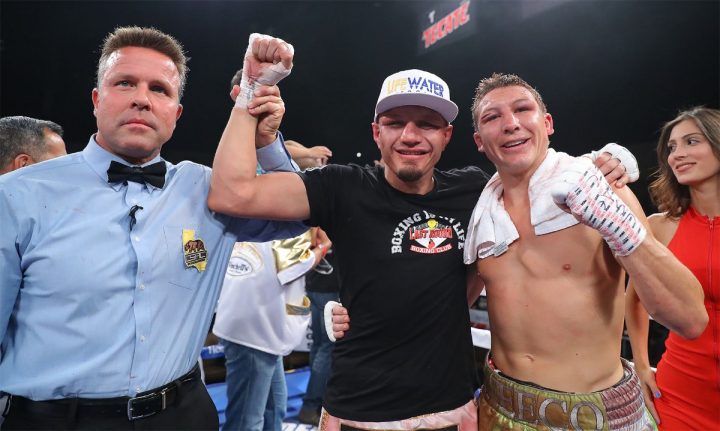 Mexican warrior Jesus “El Renuente” Soto Karass (29-13-4, 18 KOs) scored a 10-round majority decision win against super welterweight prospect Neeco “The Rooster” Macias (17-1, 10 KOs) of Palm Desert, California in the record-setting main event of the final edition of Golden Boy Boxing on ESPN from Fantasy Springs Resort Casino in Indio, California. Soto Karass and Macias threw a combined total of 3,353 punches and landed a total of 1,119 blows. One judge scored the fight a 95-95 draw, while two others scored the fight 94-96 and 93-97 for Soto Karass.

“I feel happy. I fought against a great warrior,” said Jesus Soto Karass. “I always say that whether it’s a win, a loss or a draw, the fans always win when they see one of my fights. I will speak with my team to see if this will be my last bout.”

“I want to thank God for giving me the opportunity to be in the ring with this great warrior,” said Neeco Macias. “I want to thank all of the fans for coming out tonight. We do this for you!”

In the co-main event, Manny “Chato” Robles III (17-0, 8 KOs) of Paramount, California defended his NABF Featherweight Title against Jose Gonzalez (23-7, 13 KOs) of Guadalajara, Mexico in an intense battle that Robles won via split decision. Two judges scored the fight 97-93 and 96-94 for Robles, while on scores the fight 94-96 for Gonzalez.

“I could have done better tonight,” said Manny Robles III. “He was very awkward and hard to hit. I don’t agree with the decision. I felt I won by unanimous decision, but I’m happy we got the win.”

“It was tough fight and I could have done better,” said Emilio Sanchez. “When he came at me at the beginning of the fight, I decided to keep my composure and stick to the game plan.

“This was my first fight in 15 months,” said D’Mitrius Ballard. “I was off due to some outside issues, but I’m back. I was shaking off some ring rust, and after a layoff like that, I want to come back as soon as possible.”

Aaron “Silencer” McKenna (6-0, 4 KOs) of Monaghan, Ireland stopped Abel Reyes (4-2, 4 KOs) of Tamaulipas, Mexico in a six-round welterweight fight. The fight was stopped at 2:27 of the second round.

“I took my time in there because I knew this was a six-round fight,” said Aaron McKenna. “I’ve been working on my body shots. I got him clean and dropped him to get the win.”

Jordan White (5-1, 4 KOs) of Washington, D.C. defeated Cristian Renteria (7-7, 6 KOs) of Tijuana, Mexico via KO in the first round with a time of 3:00 of a featherweight battle originally scheduled for four rounds.

“I felt like a dog. I felt great,” said Jordan White. “I loved every aspect of this event. I like the body shots, but I can do a little bit of everything. I’m looking forward to coming back.”

Sanjar Tursunov (1-0, 1 KO) of Tashkent, Uzbekistan stopped Miguel Cubos (11-20, 8 KOs) of San Luis Potosi, Mexico in the second round via TKO with a time of 1:26 in a cruiserweight fight originally scheduled for four rounds.

“I’m very happy with my performance,” said Snajar Tursunov. “Thank you to Golden Boy Promotions for this amazing opportunity.”

Macias is a rising prospect of Lancaster, Calif. who is developing a reputation for throwing as many punches as he can per round. In his most recent fight, Macias took the undefeated record of Marvin Cabrera via sixth-round technical knockout in September. In this fight, Macias threw a CompuBox junior middleweight record of 219 punches in the fifth round. This action-packed style not only earned him the victory that night, but also a contract with Golden Boy Promotions and his first headlining event against Soto Karass.

“I’m so blessed,” said Neeco Macias. “I just want to prove to Golden Boy Promotions that I’m going to work hard, learn and bring some great fights to Golden Boy cards in the future! Fighting a great fighter like Soto Karass is so amazing. I have to do all the preparation I did for past fights and more. Training hard is automatic in my preparation for fights, but now it’s a must to train harder than ever!”

Soto Karass has faced a who’s who of welterweight champions and contenders, including tough fights against two-division champion Marcos “El Chino” Maidana, Keith”One Time” Thurman, and a pair of all-out wars against Yoshihiro “El Maestrito” Kamegai. Soto Karass also possesses a spectacular 12th-round technical knockout victory against former WBC Welterweight Champion Andre Berto. Soto Karass is coming off a tough loss to Juan Carlos “Merengue” Abreu but will look to end his career on a high note by defeating a rising prospect.

“I’m grateful to Golden Boy Promotions for everything it has given me,” said Jesus Soto Karass. “I thank my fans and the boxing family for welcoming me into their homes and hearts. I won’t be leaving the sport of boxing. I’ll continue as a coach or manager. Neeco Macias will be facing a great veteran, a warrior who always gives everything in the ring. We will see what this ‘Rooster’ is made of on Nov. 8”

In the co-main event, Manny Robles III (16-0, 8 KOs) of Los Angeles will defend his NABF Featherweight Crown against Jose Gonzalez (23-6, 13 KOs) of Guadalajara, Mexico in a 10-round clash.

Jordan White (4-1, 3 KOs) of Washington, DC will open up the evening in a four-round featherweight clash against an opponent that will be announced shortly.

Macias vs. Soto Karass is a 10-round super welterweight fight presented by Golden Boy Promotions. The event is sponsored by Tecate, “THE OFFICIAL BEER OF BOXING” and Hennessy, “Never Stop, Never Settle.” The fights will take place on Thursday, Nov. 8, 2018 at Fantasy Springs Resort Casino. ESPN2 and ESPN Deportes will air the fights beginning at 11:00 p.m. ET/8:00 p.m. PT, and stream live on ESPN3 starting at 9:30 p.m. ET/6:30 p.m. PT.

Tickets for the event are on sale and start at $25. Tickets are available at the Fantasy Springs Resort Casino box office, by calling 1-800-827-2946, or by purchasing online.