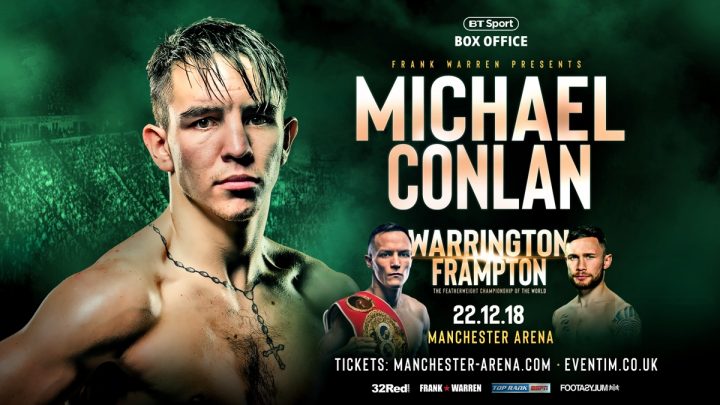 MICHAEL CONLAN has spoken of his concern for the future of amateur boxing if the sport is expelled from the 2020 Olympics.

The Belfast Featherweight prospect was involved in one of Olympic boxing’s biggest ever controversies at the 2016 Rio Games.

He was tipped to win 56kg gold, but was the victim of a points defeat against Russian Vladimir Nikitin in the quarter-finals when he looked a clear winner.

Conlan (9-0) is on a collision course to face Nikitin next year, but is in action at Manchester Arena on December 22 when his friend Carl Frampton challenges IBF Featherweight champion Josh Warrington, live on BT Sport Box Office.

A row has broken out over the governance of the amateur sport putting its Olympic future under threat and fears have risen after Gafur Rakhimov was elected AIBA President.

Conlan, 26, said: “Boxing is en-route to being kicked out of the Olympics which is very, very unfortunate and something I would not like to see.

“I think Olympic boxing is the main reason so many boxers stay amateur. The only reason I stayed amateur for so long is because I wanted to be an Olympic champion.

“If boxing get kicked out it will be really unfortunate and you will see a lot of young amateurs turn professional.

“The only people I am sorry for is the boxers who are going to miss out on a chance to become an Olympic champion and experience that.

“I feel bad for them because they have the Olympic dream and want to be successful.

“If they can’t get a chance of going to the Olympics there is no point in staying amateur in my opinion.”

Boxing has taken place at every Olympics since 1904, apart from Stockholm eight years later because boxing was banned in Sweden.

Conlan is still clinging to feint hope, adding: “I know it doesn’t look like there will be Olympic boxing, but for some reason I think it will stay.”