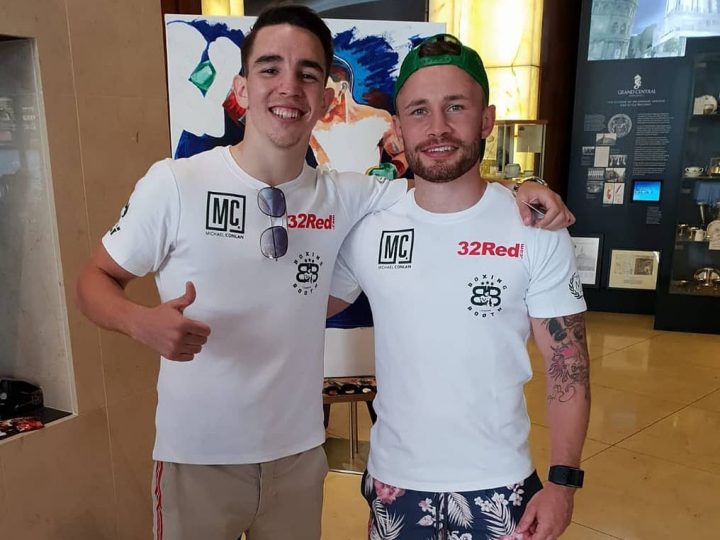 MICHAEL CONLAN has two jobs in one night next month – making it a perfect ten as a professional and gathering some intelligence on possible future opponent, Josh Warrington.

Conlan (9-0) boxes on the undercard when Warrington (27-0) risks his IBF Featherweight crown against Carl Frampton (26-1) at Manchester Arena on December 22.

Belfast’s Conlan is widely expected to fight for a world title inside 18 months, but it won’t be against Frampton because they are close friends. Warrington is in his firing line.

Conlan said: “A fight against Josh is something I can see happening and it is going to be some fight between him and Carl.

“Another reason that I’m intrigued in the fight is that it’s a scouting mission for me.

“Win or lose, I would love to face Josh Warrington in the future. Carl and myself are friends so that won’t happen, but I am definitely keeping an eye on Josh.

“If Josh loses he is still going to come again because he is young enough, hungry, determined, fit and would have the ability to become world champion again if he loses.”

Conlan’s promoters Top Rank are steadily moving him up in class and by this time next year he’s likely to be fighting top operators like Warrington.

The 2015 world amateur champion added: “I would feel confident even though I rate Josh as a fighter. His style is one I love to face and one that brings out the best in my style of boxing.

“He is the same age range as me, has the ability to win more world titles and someone I watch.”

Former world amateur champion Michael Conlan is beaming with pride after being named among a trio of Belfast fighters added to the Josh Warrington vs. Carl Frampton card on December 22.

‘The Conlan Revolution’ heads for Manchester Arena along with former amateur team-mates Paddy Barnes and Steven Ward on the night Frampton aims to become a three-time world champion. With masses of Belfast boxing fans expected to cross the water, Conlan credits ‘The Jackal’ for leading the way.

Conlan said: “It’s just great and it’s the first time I’ll have been on a professional card with Paddy, Steven or Frampton. It means a lot to me.

“Belfast is a city with great fighters kids can really up to and who inspire the next generations. That’s what it’s all about. It shows no matter who you are and where you’re from in this city – people will support you.

“It’s a tight-knit community and it’s fantastic that we can all ‘up sticks’ and bring a crowd like the one I believe will turn up in Manchester so close to Christmas.

“Carl is a friend of mine and we have a good relationship. It’s great to have that bond with someone who’s leading the way in my division. I look up to him and to be fighting on his undercard is great.

“’The Conlan Revolution’ isn’t something I came up with myself but I like it. It seems to be becoming global because the fans will travel everywhere. They’ve just been all the way to Las Vegas, where I was surprised to have such great support so it’s good they won’t have so far to travel this time.

“I was back in Belfast for a homecoming fight last summer and it was a great atmosphere. Manchester will be just the same.”

In addition, the Belfast quartet’s MTK Global team-mates Jack Massey, Sam Maxwell and Alex Dickinson are in action on the card.