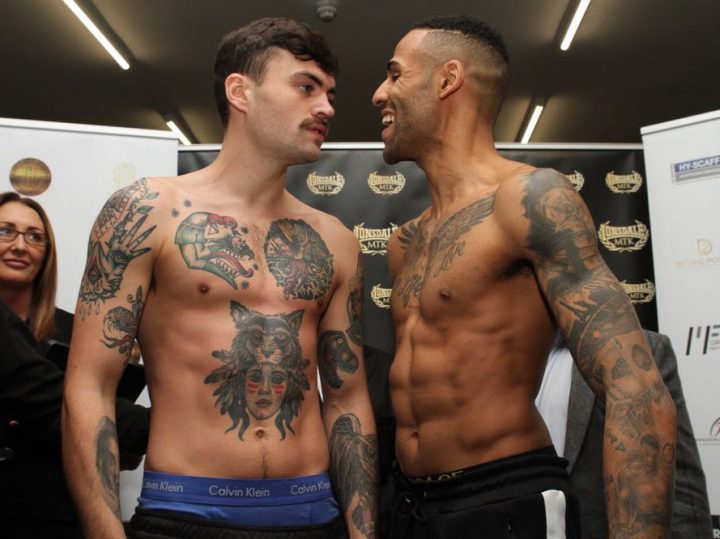 After British champion Ukashir Farooq and challenger Iain Butcher had already made weight for their bantamweight clash, McKenna and Benson went head to head and exchanged words before being separated by security.

After clashing with Benson, McKenna said: “I don’t believe the noise will be in his favour tomorrow night. I’m bringing a big crowd over from Belfast and everyone knows they make some noise.

“I’ve also got a lot of support in Glasgow already. People are coming to watch me fight. I believe I’ll have the louder support on the night and regardless – I’ve fought in American, Birmingham and Dublin before so I know what it’s like to be the away fighter.

“I’m bigger than him. He said he was going to drop down to lightweight before so that shows he shouldn’t be a super-lightweight. I’m naturally physically superior and he’s going to feel the difference on the night.

“This will get me back to winning ways and I then I want to be talked about with the main fighters in the UK and in Europe. I’ve always been vocal in saying I want to fight Ohara Davies and I still do. He’s the main guy I want.”

Benson said: “I don’t even need the crowd. He does. If he hadn’t had it in his last fight, he’d have been stopped. The crowd will be making lots of noise for me on the night anyway.

“I’ll be bringing a big crowd for this. My pals will make some noise. I brought some numbers to Belfast for my last fight but that will treble in Glasgow. I’m sure Tyrone will have his own fans over there but it’s not going to change the outcome of the fight, which will be a Benson win.

“After I beat him in Scotland, I’d love to go over to Belfast and beat him in his own back yard too. It’ll need to be a good fight for that to happen but I’d love to do it.

“This fight will steal the show. Both men are coming off a defeat and both of us deserve credit for taking it. I think it’ll be a cracker. Tyrone will be punching shadows all night as I hit and move him around. Prove me wrong if you can, Tyrone.”