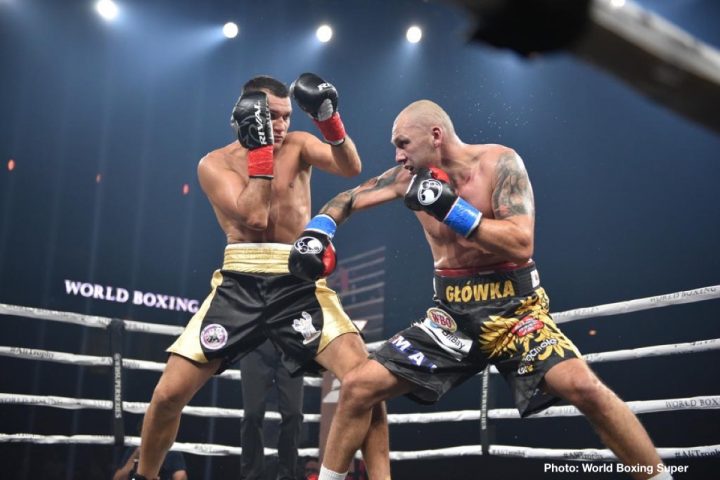 By Allan Fox: Former WBO cruiserweight champion Krzysztof Glowacki (31-1, 19 KOs) used his power punching to defeat Maksim Vlasov (44-3, 25 KOs) by a hard fought 12 round unanimous decision to win the WBO interim title in the quarterfinal of the World Boxing Super Series tournament a the UIC Pavilion in Chicago, Illinois.

Glowacki still was punching with power, but he wasn’t hitting as hard as he had previously. The fight was competitive in the championship rounds thanks to the 32-year-old Vlasov’s huge heart and determination.

Glowacki got away with a low blow in round one. Immediately after hitting Vlasov with a low blow, Glowacki nailed him with a big shot to the head that hurt him. The referee stood and watched and failed to step in to address the low blow. It was one of those situations where the referee wasn’t mentally alert at the time, and he let Glowacki get away with a hard foul.

The southpaw Glowacki was landing some monstrous shots in the first six rounds. Vlasov was able to get out of the way of a lot of the punches that Glowacki was throwing at him due to his upper body movement. He did a good job of making Glowacki miss so that he could survive the entire fight.

Vlasov suffered a bad hematoma on the right side of his forehead late in the fight from a clash of heads. By the end of the fight, the hematoma had swollen badly. Fortunately the fight wasn’t stopped due to it.

With the victory tonight, Glowacki will now be moving forward to fight former WBC cruiserweight champion Mairis Briedis (26-1, 18 KOs) in the semifinal of the World Boxing Super Series. That’s going to be another tough one for Glowacki, as Briedis can punch, he’s got good boxing skills, and he’s able to take a good shot

“Mairis Briedis is a good fighter, so I’m expecting the fight will be more interesting than tonight,” Glowacki said afterwards about his next fight in the World Boxing Super Series tournament semifinal against Briedis in early 2019. “He [Vlasov] was a really tough fighter, and he kept getting up and recovered.”

In the co-feature bout, former WBC cruiserweight belt holder Briedis defeated the tough Noel Mikaelian (24-2, 10 KOs) by a 12 round unanimous decision. The judges scored it 116-110, 115-111, and 115-112. Briedis won the World Boxing council Diamond belt. The victory paves the way for Briedis to move forward to face Glowacki in the semifinals of the WBSS tourney.

Referee Guadalupe Garcia had a busy night, deducting points from both fighters for fouls. Garcia took a point away from Briedis in the 10th round for tagging Mikaelian with a shot while he had him in a headlock in the 10th. Earlier in the fight, Garcia took a point away from Mikaelian for hitting Briedis with a shot behind the head in the 4th. The two deductions evened things out, making it inconsequential.

Overall, it wasn’t a great performance from Briedis. Mikaelian looked like the better fighter and should have gotten the victory in the eyes of many boxing fans at ringside. They booed loudly when the results were announced.