Frank Buglioni & Kal Yafai back in action in Monaco this Saturday 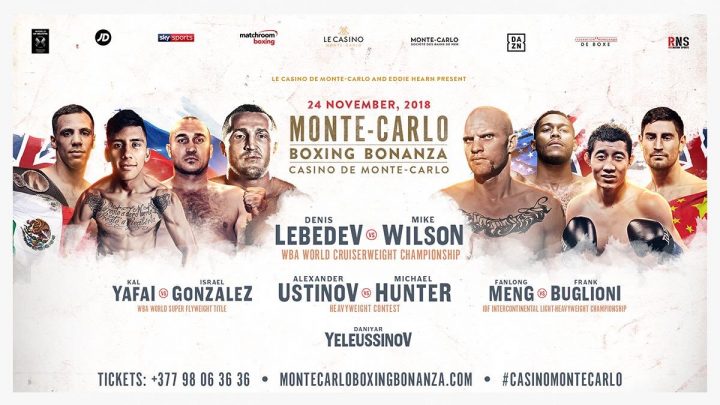 Frank Buglioni says a win over Fanlong Meng will re-establish him as one of the biggest threats in the Light-Heavyweight division.

‘Wise Guy’ takes on undefeated Meng for the IBF Inter-Continental Light-Heavyweight title at the Casino de Monte-Carlo this Saturday, live on Sky Sports in the UK and DAZN in the US.

Chinese amateur star Meng, touted by man as one of the best boxers in China, has racked up 13 straight wins since turning professional in 2015, picking up the WBO Oriental and IBF Inter-Continental titles along the way.

However, Buglioni feels the former Chinese National Champion is yet to be tested in the paid code and is confident of taking the IBF ranking belt back to Enfield with him on Sunday morning.

“I have a very tough test in Fanlong Meng,” admitted Buglioni. “He’s a 2012 Olympian and has a solid amateur record. As a professional I don’t think he has been tested much yet, so this will be his acid test. I’m looking forward to upsetting the party and taking his belt and his undefeated record.

“Meng likes to keep things at his own pace and keep his opponents at range, but I’ll be constantly moving and creating angles. I’m fitter and sharper than I’ve ever been and he won’t be able to keep me off all night.

“Throughout my career I’ve always done well against southpaws and I’ve always enjoyed fighting and sparring them, be it amateur or pro, and my record against them is very good. I’m heading into the fight with a lot of confidence.”

Former World title challenger Buglioni has been busy rebuilding in the gym and sees Saturday’s fight as a golden opportunity to fire his name back into World title contention once more.

“The Light-Heavyweight division is buzzing and a good win over Meng will re-establish me as one of the top guys out there. A win would certainly put me back at the top of the pile domestically and possibly Europe too, I won’t be far off World level.

“I’m very pleased with my progress since the Callum Johnson defeat. I’ve built upon the mistakes I made in that fight and I’m looking forward to putting on a real show and proving myself once again.

“I’ve had some fantastic sparring all throughout this camp including James DeGale. I’ve made some massive improvements in the gym and I think that has been due to such good quality sparring. The guys I have worked with have kept me on my toes really put it on me.”

Buglioni’s British title reign was ended by a shock first-round stoppage loss to Callum Johnson at The O2 in March. Johnson’s victory was swiftly rewarded with a shot at IBF Light-Heavyweight Champion Artur Beterbiev.

Johnson’s brave World title attempt ended in a fourth-round KO but Buglioni believes the Lincolnshire man was just moments away from being crowned a World Champion and has taken confidence from his rival’s performance.

“I think Callum was very unlucky against Bertebiev,” added Buglioni. “I don’t think he realised how much he hurt him in the second round. When he caught him with that shot, Bertebiev’s legs weren’t there. If Callum has jumped on him then he’d be a World Champion right now.

“Callum proved that the guys at the top of the domestic scene can mix it at World level. They just need to have the belief in themselves and give it everything they have. I’m fully focused on Fanlong Meng but I know what a win could lead to.

“A shot at a World title is the dream and you never know what is around the corner, I just need to keep on winning. I’d love a shot at any of the World Champions, but I like fighting southpaws and if an opportunity to fight Adonis Stevenson arises then why not?”

Buglioni’s clash with Meng is part of a huge night of action in Monaco.

Kal Yafai is targeting unification fights with the Super-Flyweight division’s other World Champions in 2019 should he get past Mexico’s Israel Gonzalez this Saturday at the Casino de Monte-Carlo in Monaco.

The unbeaten Birmingham star puts his WBA crown on the line for the fourth time against former World title challenger Gonzalez, live on Sky Sports in the UK and DAZN in the US, and is planning on delivering an explosive performance to end the year with a bang.

“The most important thing is winning and looking good in doing so,” said Yafai. “There’s some huge fights to be made in 2019 so I just need to get in there and do what I do best and impress. I’ll be looking to put on an explosive performance to end the year in style.

“Gonzalez looks like a tough fighter and he looks dangerous on the counter. From his record you can tell that he’s durable, so I’ve got to be on it. I’ll need to put in a solid performance to deal with him.

“I expect him to be looking to counter early on but then as the first three or four rounds go by, if it goes that far, he’ll realise that he can’t outbox me or counter me. He’ll have to resort to coming forward and applying pressure which won’t work out for him very well.”

Yafai emphatically announced himself in the US when he stopped David Carmona in seven rounds on his American debut at the Save Mart Arena in California earlier this year and is keen to fight in the States again next year.

“I really enjoyed my American debut. It was an exciting fight to be involved in and entertaining for the fans. Hopefully on Saturday I’ll do a good job on this guy, look good, and then head back over to America next year and get some big fights.

“I love the States and I love being over there. I’m looking forward to going back over there and impressing once again. I need to get the job done on Saturday and then we can look forward to an exciting 2019.”

Saturday will be the second World title attempt for Gonzalez (23-2, 10 KO’s) after he was stopped in ten rounds by IBF kingpin Jerwin Ancajas Bank of America Center in Texas. The feisty Filipino southpaw is no stranger to these shores having wiped out Jamie Conlan in 2017 and Yafai is eager for a blockbuster showdown with the Manny Pacquiao-promoted fighter.

“Jerwin Ancajas and Sor Rungvisai are obviously the two names that stick out,” added Yafai. “They hold the IBF and WBC belts so I’d like a crack at either of them next year. Donnie Nietes and Kazuto Ioka are fighting for the Vacant WBO title on New Year’s Eve so the winner of that is another option.

“Roman Gonzalez is still a massive name in the division and that would be a huge fight for me that would bring a lot of money to the table. It’s an exciting time to be fighting at 115lbs and I just need to make sure that I shine on Saturday.”

Yafai’s clash with Gonzalez is part of a huge night of action in Monaco.