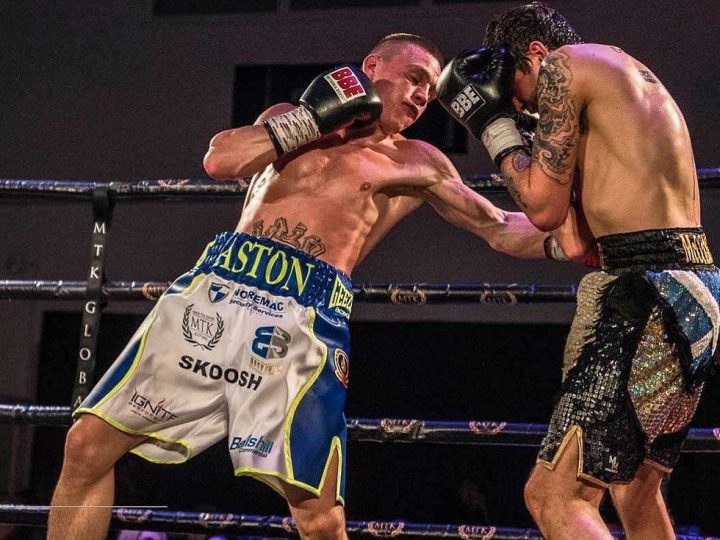 Motherwell’s ‘Baby Butch’ (18-3-KO5) challenges for a British title for a third time against the unbeaten Farooq (10-0-KO4), who will enjoy home advantage at Glasgow’s Emirates Arena on the night.

Despite technically being an ‘away’ fighter, Butcher welcomes the prospect of a raucous atmosphere and is confident he has the ringcraft to emerge with the Lonsdale belt – live on BoxNation.

Butcher said: “I’ve sparred with Kash a few times and he’s very good – but I see loads of weaknesses I can exploit and I’m looking forward to showing him and everybody what level I’m at.

“What’s clearly noticeable is that I have more experience than him. I’ve done the distance a few times and he hasn’t. I’ve been a professional longer than him and I believe my experience will play a massive part.

“The atmosphere on fight night is going to be electric. It’s going to be a massive night in there and the Scottish boxers will get great support. I was at the first TV card MTK Global put on and it was great but this is even bigger.”

Two-time Commonwealth Games medallist Reece McFadden will return to the scene of some of his most famous amateur successes when he makes his professional bow.

The 23-year-old from Belshill is ready to kick off one of Scotland’s most hotly-anticipated careers on the MTK Global card at Emirates Arena on November 30 and hopes to do so in style.

McFadden, who won a staggering 150 of 165 amateur bouts – including a victory over elite Welsh talent Andrew Selby – said: “This is a great stage on a great night.

“I’ve boxed in this arena before as an amateur and the atmosphere and the support is amazing so I can’t wait to be back in there for my professional debut.

“I won two of my senior elite Scottish titles in there so it’s a happy hunting ground. I just can’t wait for the first bell to go so I can get stuck right in.

“This is another great night for Scottish boxing, which is on absolute fire at the moment and is only going to go from strength to strength now. I’m glad to be a part of it.

“I don’t feel under any pressure whatsoever – I just know I’m going to go out there and put on a show. There are some other great fights after that, too. I’m particularly looking forward to Kash Farooq vs. Iain Butcher.”

McFadden debuts on a card that sees Farooq and Butcher clash for the British bantamweight title, Kieran Smith vs. Peter McDonagh for the WBC International Silver super-welterweight crown and the likes of David Brophy, Michael McGurk, Jack Turner and more star on the undercard.

NEWS:   David Adeleye: “Dave Allen and Nathan Gorman are fights I think I can take"

Luke Caci is planning to sign off from 2018 with another victory next month and then drop down to become a super middleweight in the new year.

Caci has announced his intentions to make 168lbs, after starting his pro career as a light heavy, ahead of fight night at Walsall Town Hall on Saturday December 8.

He features on Errol Johnson’s BCB Promotions next show at the venue, which is fast becoming the home of Black Country boxing.

He’ll be looking to make it a magnificent seven in the paid ranks, after picking up six points wins so far. He won the eight-round British Challenge title earlier this year.

His two toughest contests have come over the past 12 months, both at the King’s Hall in Stoke-on-Trent, starting when he survived a late gut check to beat Chris Dutton on points.

It was a comfortable win, in the end, with referee Shaun Messer having him well ahead by four rounds, in a 78-74 decision.

A four-rounder against Craig Nicholson, who had only lost once in five outings going into battle, proved another slugfest.

Caci rolled over him for the loss of just one round, 39-37 and again with Mr Messer, but knew he’d been in a fight afterwards.

It gave him some food for thought though, which has led to the 28-year-old making the decision to campaign at a new weight in 2019.

The Orme Boxing Club graduate, from Newcastle-under-Lyme, believes he can shed the pounds required to make the super middle limit without too much hassle.

He said: “My last four-rounder was a tough one, he really came to win and he was a decent fighter. I had to perform and that’s what you want every time.

“I train my hardest for each fight, day in and day out, and I like the regiment of camp. The runs, eating right and grafting in the gym becomes routine.

“There’s a buzz about being fit and focused, I’m a boxer and I look forward to getting in the ring. Come December 8, I’ll be ready to be all business.

“It’s been a good year, winning a title obviously was a highlight but I’m pleased with it. It’s about December 8 now and then looking forward to 2019.

“I don’t put too much pressure on myself, as I long as I’m enjoying my boxing is all that matters. When my time comes, I’ll get myself prepared for it.

“I’m planning to go down to super middle, I make light heavy too easy and I don’t think I’ll find much harder to make the weight. Maybe it’s natural.

“There are some beasts at light heavy now and I’m not particularly big at the weight. I’ve been coming in under the limit, so I may as well drop down.

“When I was an amateur, middleweight was too small for me so I always boxed at light heavy and I took that into being a pro. I just stayed there.

“It’s the right time to do it and I’ll feel even more confident at super middle. Perhaps my power will tell a little bit more against future opponents.”

Two six-rounders support the top of the bill, with major domestic challengers Ricky Summers and Tyler Denny returning to action.

Tipton’s Summers challenged for the British light heavyweight crown last year and was last ruled out of a clash with Olympian Joshua Buatsi through injury.

Denny, from Rowley Regis, has recovered from the horrific split lip and heavy swelling by his eye that put paid to his English title aspirations in September.

‘Ruthless’ still reigns supreme as the Midlands middleweight champion and is determined to bounce back from that eighth round retirement to Reece Cartwright.

Another man with a point to prove will be Craig Morris, from Ludlow in Shropshire, who is looking to rebound from his own September setback.

Morris last lost in a televised thriller at welter with Scott Fitzgerald, who pulled a 10th and final round stoppage out of the hat when he looked behind on points.

Lee Glover returns to the ring after two years out. ‘The Tipton Slasher’ has competed for Midlands and English honours, the latter at two weights. He’s back at super feather.

Wolverhampton’s Conah Walker, a protege of boxing legend Ricky Hatton, targets a hat-trick of paid successes. The Merridale BC graduate only turned over on September 22.

The Grosvenor Casino Walsall, on Bentley Mill Way, are the show’s headline sponsors. They will host the weigh in y (over 18s).