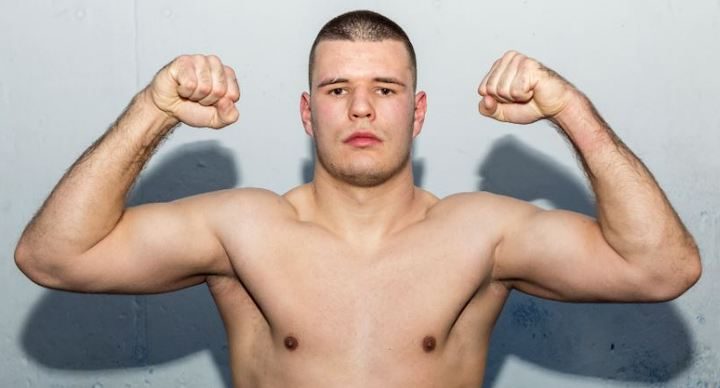 Milas will be looking to cap off an impressive year that has seen him record victories over former World title challengers Francesco Pianeta and Kevin Johnson, and claim the IBO International and WBC Mediterranean titles.

“My opponent is a strong man, but not too strong for me,” says Milas, who is looking forward fighting on a big card in the Croatian capital. “I love the big shows. They inspire me, as my performances in Munich have already shown

“This will be another step up the ladder for me, and the fans should expect an entertaining fight, but one that could come to an end very quickly.”

Milas also has a message for his heavyweight rival Hrgović, who tops the bill in Zagreb, defending his WBC International title versus Ecuador’s Ytalo Perea.

“Hrgović should study me well,” he says. “I’ve already seen weaknesses in him, and in the future, I see us both standing in the ring, fighting for the World title!”

The WBC International Heavyweight Championship contest between Filip Hrgović and Ytalo Perea will top an action-packed fight card at the KC Dražen Petrović on December 8 with a full undercard set to be announced.

Tickets start from 150 KN and are available online via www.eventim.hr. All the action will be broadcast live and exclusive on RTL in Croatia.

The 29 year-old from Zagreb is fired up as she gets the opportunity to avenge her first career defeat in a ten-round super welterweight clash with Bajic, who defeated Habazin via unanimous decision for the IBF World title in March 2013.

Since suffering defeat to her Serbian rival, Habazin has gone on to claim both IBF Welterweight and IBO Middleweight World titles, and with an improved approach to her preparations she is confident of reversing the decision.

Habazin is also looking forward to fighting in front of her home fans again having successfully defended her IBO Middleweight World title with a one-sided points win over Gifty Amanua Ankrah on September 8 at the Arena Zagreb.

“I’m excited to be fighting again in Zagreb,” said Habazin. “It was quite overwhelming to box in front of my home fans last time, especially as this was the first boxing event of such significance. I was eager to prove myself and I wanted everyone to see the hard work and dedication I invested in my training.

“I’m even more excited to be boxing Eva again. The first fight I ever lost in my career was against Eva, and that is why my motivation is even greater this time.

“I think Eva is a very formidable and experienced opponent. However, our last fight resulted in defeat because I wasn’t prepared how I should have been. I defeated myself. I expect she considers herself the favorite in this fight because of that win, but I’m ready to show everyone that I will be victorious this time.

“Since our first fight, my approach has changed. I am really putting boxing as my priority. My health is finally good. I have a great team around me, and a great coach in James Ali Bashir. I really believe this fight could result in KO”

Habazin’s revenge mission will provide chief support on Hrgović’s WBC title defence, with Petar Milas having been forced to withdraw from a heavyweight showdown with Serhiy Radchenko after suffering a hand injury in training.

The WBC International Heavyweight Championship contest between Filip Hrgović and Ytalo Perea will top an action-packed fight card at the KC Dražen Petrović on December 8 with a full undercard set to be announced.

Filip Hrgović (6-0, 5 KOs) continues his World title hunt on December 8 as he returns to Zagreb to defend his WBC International Heavyweight title at the Arena Drazen Petrovic.

The Croatian star sent shockwaves through the heavyweight division with a sensational third-round knockout win over Amir Mansour to claim the WBC International belt on September 8 at the Arena Zagreb.

As Hrgović continues to climb the rankings and move closer to an inevitable World title challenge, the Rio 2016 Olympic Bronze Medallist returns to the Croatian capital to defend his belt against another top heavyweight contender.

“There was a lot of pressure on me before my last fight, with Mansour replacing Cornish late into my preparations, and with Mansour being a better fighter and a southpaw as well. That being said, we had a fight plan, which I stuck to perfectly, and secured a good win and made a statement for everyone in the heavyweight division.

“On December 8, I will take another step forward in my career. I’ve never hid from a challenge and have made tough choices since my professional debut last year. At the Arena Drazen Petrovic, I will continue the same path and face the best possible opponent, as I believe I need to beat the best to be the best.

“I am currently back in Miami, and will be training here with my coach Pedro Diaz until the fight. Pedro has prepared a specific training plan as he did against Mansour, and I am sure that we will be 100% ready for my next opponent.

“I urge everyone to reserve their tickets as soon as possible, as we plan to organise another magical boxing night in Zagreb on December 8. I want to put Zagreb on the boxing map and make Croatia proud of their talented boxers.”

Zeljko Karajica, CEO of 7Sports, the sports unit of the ProSiebenSat.1 Group and Managing Director of the operating event agency MMP Event GmbH, is anticipating another great event on December 8.

“Following a successful event on September 8, we look forward to returning to Zagreb for another spectacular night of boxing,” said Karajica. “Filip is currently the biggest talent in the world of boxing, and we are excited to be bringing his next fight to the Arena Drazen Petrovic on December 8.”

Promoter Nisse Sauerland, of Team Sauerland, says he has been impressed with Hrgović’s meteoric rise through the professional ranks, but admits tougher tests lie ahead including December’s title defence at the Arena Drazen Petrovic.

“Filip continues to impress,” says Sauerland. “His fight with Mansour attracted a 38% television market share in Croatia, and earned him a top twenty ranking with the WBC and that WBA, which is an impressive achievement after only six professional bouts. Filip must now build on this success. Starting on December 8, the stakes will get higher, the opponents will be get tougher, and he must rise to the occasion.”

Antonio Vuksanović, Sports Editor of RTL, who will broadcast the fight live and exclusive in Croatia, adds: “We are extremely happy to get to see Filip in ring one more time before the end of the year. It will be an early Christmas present to our audience.”

Tickets for Filip Hrgović: On The Hunt are on sale now and available via www.eventim.hr.