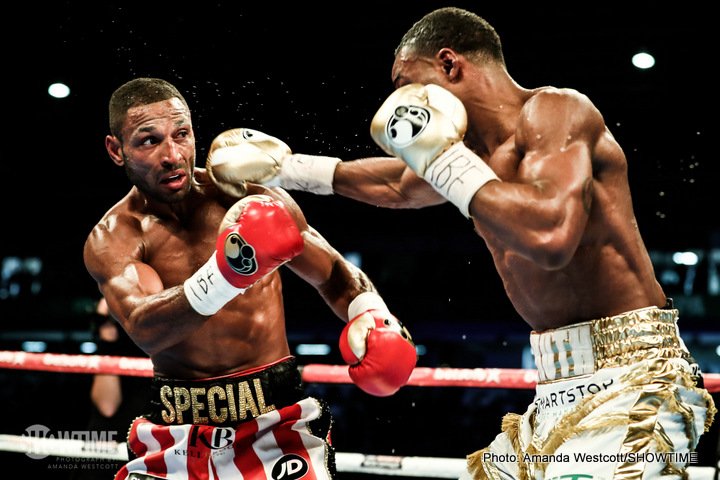 By Tim Royner: Errol Spence Jr. is picking Kell Brook to beat Amir Khan when/if the two of them meet in early 2019 in a big UK clash on Sky Box Office. The two fighter are currently trying to negotiate the fight with the help of their promoter Eddie Hearn of Matchroom Boxing, who is doing what he can to help them reach an agreement.

Brook has already agreed to come down from 154 to fight Khan at 147, but that’s not enough. Khan wants the 10-lb rehydration clause to make the fight even more fair. It’s pretty important for Khan not to be outweighed again like he was in his fight against Saul Canelo Alvarez in 2016. That was a fight in which Canelo knocked Khan out cold in the 6th round. At the time of the stoppage, Khan was ahead and looking very good. This was before Canelo transformed his body to the body builder look that he now sports. It might be even tougher for Khan to face a guy like Canelo now that he looks like Hercules.

The two currently are a stalemate over the 10 lb rehydration clause that Khan (33-4, 20 KOs) wants Brook (37-2, 26 KOs) to agree to. The rehydration limit would limit the weight Brook can gain back for the morning of the fight. He would need to keep his weight within 157 lbs for the secondary weigh-in.

Brook, 32, is clearly the bigger fighter of the two. When you look at the 170+ lbs that Brook will likely rehydrate to for the Khan fight, he’s going to have a tremendous weight advantage. If Khan is lucky, he’ll only be outweighed by 10 lbs on the night. It’ more likely though that Brook will come into the fight with a full 15 lb weight advantage over Khan if he can get him to back down from his 10-lb rehydration clause that he’s asking for. Brook is basically as heavy as former middleweight champion Gennady Golovkin after he rehydrates for his fights at welterweight and junior middleweight. Without the weight advantage over Khan, things become a little dicey and hard to predict for Brook. He might be too weak to beat Khan if he’s forced to agree to the 10 lb rehydration limit.

Brook has to first get by his December 8 opponent Michael Zerafa (25-2, 14 KOs) before he can think about fighting Khan. Brook will be fighting Zerafa in a tune-up fight at the Sheffield Arena in Sheffield, England.

Spence knocked out Brook in the 11th round last year in May 2017 in Sheffield, England. Brook took a knee in the 11th and chose not to continue fighting. It appeared that Brook wasn’t willing to go out on his shield the way warriors do when they fight. Although had an eye injury at the time, he was still competitive in the fight. Spence was getting the better of Brook, but it wasn’t one-sided to the point where anyone thought that Kell would suddenly quit the way he did. Afterwards, Brook took a lot of heat from boxing fans for him quitting on a knee. It wasn’t the first time that Brook quit in a fight. He also quit in his fight against Gennady Golovkin in 2016 when he stopped throwing punches in the fifth round.

“I do think it will happen,” Spence said about the Brook vs. Khan fight.

Spence (24-0, 21 KOs) will be defending his IBF welterweight title against Mikey Garcia (39-0, 30 KOs) on March 16 on Showtime pay-per-view at the AT&T Stadium, Arlington, Texas. A lot of boxing fans are looking forward to the Spence vs. Garcia fight. It’s a match with a clear underdog in Mikey, who will be moving up one weight class from 140 to try and capture a fifth division world title. That’s something that will help shape Mikey’s legacy and turn him into a bigger star than he is right now. For Spence, a victory over Mikey will help take his career to another level, as a lot of casual boxing fans will be watching the fight to see Mikey. Spence can snatch those fans up and add them to his steam train.

Spence, 28, says he would be open to fighting Brook in a rematch, but he needs to win one of the world titles at junior middleweight for him to be interested enough in taking the fight. Since Brook has shown zero interest in fighting any of the champions at 154, it’s not likely that Spence will ever fight him again. Brook wanted to move up to 154 for a long time, but now that he’s fighting in that weight class, the only guys he wants to fight are weaker junior middleweights in Sergey Rabchenko, Michael Zerafa and welterweight Khan. It’s possible that once Brook gets the Khan fight, he’ll turn to guys at 154 to fight and try and win a world title in that division. If Brook continues to raid the 147 lb weight class looking for vulnerable opposition, then he might as well drop back down in weight on a permanent basis.

Spence says he’s not just going to give Brook a rematch for the heck of it, because he’s already beaten him once before. It won’t be worthwhile for Spence to fight Brook again unless he wins a title.

If the Khan vs. Brook fight fails to get made, then the two of them are going to be facing some very hard realities in their respective weight classes. Khan will need to try and his hand against the likes of Shawn Porter, Manny Pacquiao, Keith Thurman or Spence. None of those would seem to be winnable fights for Khan. He’d like to fight Pacquiao, but it remains to be seen whether his promoter Hearn can negotiate that match. For his part, Brook would need to start fighting quality junior middleweights like Jermell Charlo, Jarrett Hurd, Erislandy Lara and Jaime Munguia. Those are fighters that would likely beat Brook.