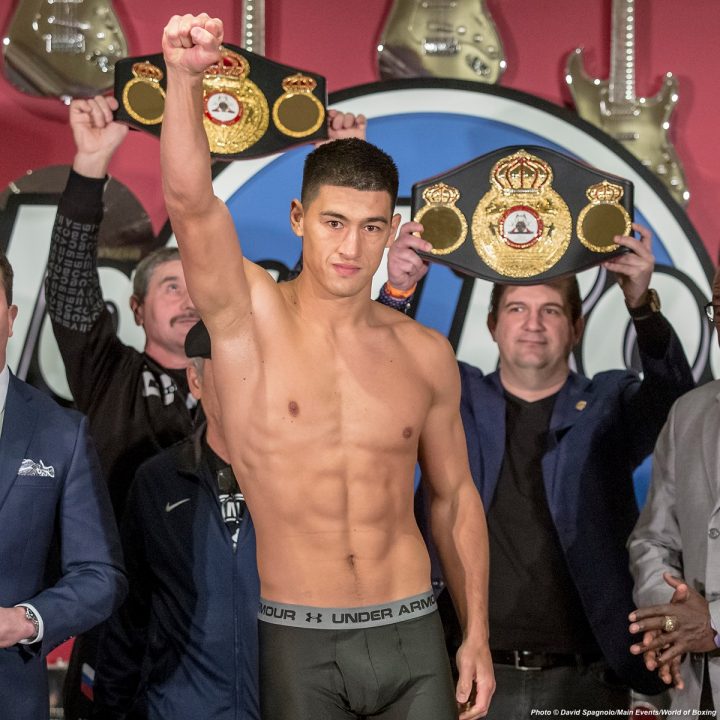 By Sean Jones: Dmitry Bivol (15-0, 11 KOs) says he’s willing to drop down from light heavyweight to face Saul Canelo Alvarez at super middleweight if he beats WBA ‘regular’ 168 lb champion Rocky Fielding next month in their fight at super middleweight on DAZN at Madison Square Garden in New York.

Bivol, 27, who is small for a light heavyweight and should arguably be fighting at super middleweight, wants to fight Canelo Alvarez to give the boxing fans what they want. It’s what Bivol wants and it’s what the boxing public wants. Now it’s up to Canelo for him to prove that he can beat the 6’1″ Fielding (27-1, 15 KOs), and then stick around the 168 lb weight class long enough for him to face the Russian Bivol.

It would take some bravery on Canelo’s part to fight the technically oriented Bivol, but at least he would prove something by staying around to fight him. Bivol would be losing weight to come down to 168, so it wouldn’t be a situation where he’s using his size to squash Canelo. Bivol arguably belongs in the super middleweight division, which is why he’s been unable to knockout a lot of his opponents at light heavyweight recently. Bivol’s power would likely be a lot better at super middleweight.

“This is my time. I would like to fight the other champions in my division and unify the light heavyweight titles,” said Bivol. “I could even move down to 168 pounds and fight Canelo if he beats Rocky Fielding to win the WBA super middleweight title. That way we could each put our titles on the line. I just want to fight the best. That is what I want and that is what the fans want.”

Bivol vs. Canelo would be a great fight. Bivol isn’t someone that Canelo and his promoters at Golden Boy Promotions would need to worry about in terms of his punching power, as he’s not a huge puncher. The thing that Canelo would need to overcome is Bivol’s boxing skills. Like Gennady Golovkin, Bivol doesn’t possess blazing hand speed, but he makes up for it with his technical skills. Canelo, 5’8″, would need to figure out how to overcome the 6’0″ height of Bivol. Fielding, 6’1″, is taller than Bivol by one inch. As such, if Canelo can beat Fielding, then he should have no excuses fornot facing Bivol.

If Canelo wants to create a lasting legacy, he needs to step it up and face guys like Bivol to show the boxing public that he’s not afraid to fight the best. Fielding isn’t the best. He’s not the worst at 168, but he’s clearly not the best. Canelo’s fight with Fielding hasn’t attracted a lot of interesting due to the boxing fans seeing it as another safe fight for Canelo. It would be a different story if Canelo were to take on Bivol. The fans would appreciate that move on Canelo’s part.

Getting Canelo to face one of the best light heavyweights in the division in Bivol might prove to be impossible. Canelo has no problems with fighting the 6’1″ Fielding, but that’s because he’s not considered one of the best fighters at 168. Fielding is a champion but only because he beat a fighter more flawed than himself in Tyron Zeuge last July. Zeuge never was much of a champion. He beat Giovanni De Carolis in 2016 to win the World Boxing Association world super middleweight title, and then took it easy in defending his belt successfully in defeating Isaac Ekpo x 2 and then Paul Smith, who had done nothing to deserve a title shot.

NEWS:   Eddie Hearn to Canelo Alvarez: "Please choose one of our guys"