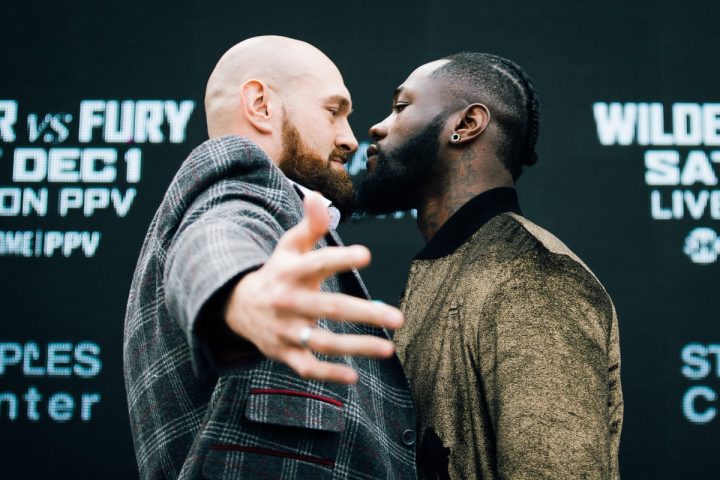 Fans can relive two of the most exciting and competitive fights of 2018 ahead of the December 1 SHOWTIME PPV headlined by WBC Heavyweight Champion Deontay Wilder and lineal heavyweight champion Tyson Fury from STAPLES Center in Los Angeles. The Wilder vs. Luis Ortiz thriller from March and the Erislandy Lara vs. Jarrett Hurd all-action affair from April, both leading candidates for 2018 Fight of the Year, are available in their entirety now on the SHOWTIME Sports YouTube channel.

In Wilder’s toughest test to date, the undefeated WBC heavyweight champion retained his belt in an instant classic from Barclays Center in Brooklyn. Wilder withstood a seventh-round assault from the Cuban slugger Ortiz, only to rebound and floor his undefeated top-five ranked world title challenger twice in the 10th round en route to his 39th KO victory.

In an electrifying fight from The Joint at Hard Rock Hotel and Casino in Las Vegas, IBF Champion Jarrett Hurd unified the 154-pound division with a 12-round split-decision victory over WBA Champion Erislandy Lara in just the seventh unification in division history. The difference in the Fight of the Year candidate was a short left hook that floored Lara in the final minute of the fight.

The December 1 SHOWTIME PPV is headlined by Wilder vs. Fury, which tests the raw power of the 6-foot-7 Wilder against the unmatched size and mobility of the 6-foot-9 Fury in the most significant heavyweight event in the U.S. in more than 15 years. In the co-feature, Hurd returns for his first fight since dethroning Lara to defend his IBF and WBA titles against Jason Welborn. Ortiz will continue his quest for a second shot at a heavyweight world championship as he takes on American Travis Kauffman.

Wilder-Fury to be screened in movie theaters on 12/1

WBC Heavyweight World Champion Deontay Wilder (40–0, 39 KOs) will defend his title against lineal champion Tyson Fury (27-0, 19 KOs) in a blockbuster match-up on Saturday, December 1. Boxing fans will want to catch all the action, larger-than-life on the big screen, at their local cinemas as these undefeated warriors battle it out LIVE from STAPLES Center in Los Angeles.

Tickets for “Wilder vs Fury” can be purchased online by visiting www.FathomEvents.com or at participating theater box offices.

The live broadcast of “Wilder vs Fury,” presented by SHOWTIME PPV and Fathom Events, is set for Saturday, December 1 at 9 p.m. ET/ 8 p.m. CT/ 7 p.m. MT/ 6 p.m. PT/ 5 p.m. AK/ 4 p.m. HI. Fans throughout the U.S. will be able to enjoy the event in more than 400 select movie theaters through Fathom’s Digital Broadcast Network (DBN). A complete list of theater locations is available on the Fathom Events website (theaters and participants are subject to change).

“Wilder vs Fury” tests the raw power of Wilder against the unmatched size and mobility of Fury. America’s only heavyweight champion since 2007, former Olympian Wilder has won by knockout in all seven of his WBC title defenses. Fury, the “Gypsy King,” is a former IBF, WBA and WBO heavyweight world champion who currently holds boxing’s coveted lineal heavyweight title.

The evenly matched showdown of top-ranked heavyweights pits boxing’s two largest champions against each other in the most significant heavyweight fight in the United States since Lennox Lewis vs. Mike Tyson in 2002. In addition to physical stature – Wilder is 6-foot-7, Fury 6-foot-9 – both are among boxing’s greatest showmen, with outsized personalities and heavyweight charisma.

“The fight world has been waiting for an epic heavyweight battle like this for more than 10 years,” said Ray Nutt, Fathom Events CEO. “We are proud to partner with Showtime to give fight fans the opportunity to view, right from their local cinemas, what is certain to be an awesome spectacle.”