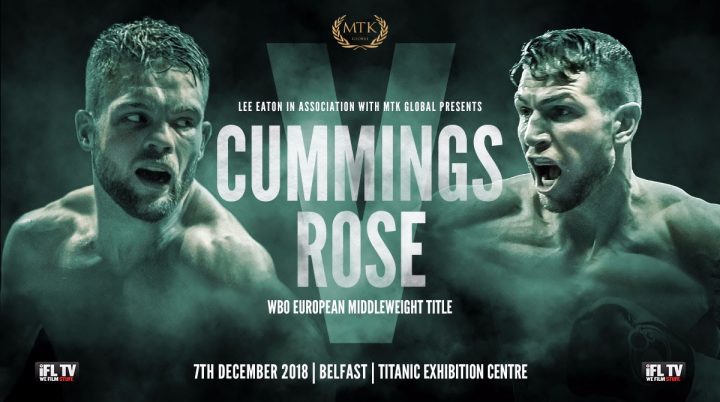 Former world title challenger Brian Rose is confident his big-fight experience will be the difference when he takes on Conrad Cummings for the WBO European middleweight title.

‘The Lion’ travels to Belfast’s Titanic Exhibition Centre to face ‘Mr Dynamite’ – live on iFL TV on December 7 – having returned to action with an eventful points victory over Alastair Warren in Manchester last weekend.

With the cobwebs blown off after a spell out of the ring, Blackpool’s Rose (30-5-1-KO8) feels ready to add European honours to his collection of Central Area, English and British belts.

Rose said: ““I have respect for Conrad. I know he’s a warrior. I’m not about that trash-talk leading up to the fights. There’ll be no bad words. He believes he’s going to win – especially after watching me against Warren – but I know I’m a lot better than that.

“We’ll give the fans what they want and that’s a tear up. I know I’m going to come out on top because I believe I can outfox him.

“I knew I wasn’t going to look a million dollars against Warren. In the past, I’ve fought for world titles and been involved in great British domestic tear-ups but I knew it wasn’t going to be one of them.

“I’ve lost two stone in eight or nine weeks so fighting Warren was about getting fit, losing a lot of weight and moving on to the next one. Now I’m fit and ready and we’ll work on the things we need to do to beat Conrad Cummings.”

Conrad Cummings and Brian Rose will contest the WBO European middleweight crown after a back injury forced champion Luke Keeler to temporarily vacate.

Rose, who returned with victory on the MTK Global show in Manchester on Friday night, had been scheduled to face Keeler in London but will now head to Belfast to take on Cummings on December 7 – live on IFL TV.

With Keeler lying in wait for the winner as he works back to full fitness, Cummings is hopeful of securing a chance at gaining revenge over the Dublin man for a points defeat earlier this year by beating the experienced Rose.

Cummings (15-2-1-KO7) said: “I’m absolutely thrilled. This is a chance at redemption and to show what I’m really about. Fair play to Rose – he’s fought at world level and he’s a big name but this is a fight I’m going to win.

“I think I’ve got a lot advantages. I’m a big, strong middleweight at 27 and I’m hungry. I’ve a big chance here and Rose is not going to stop me. This is my home territory.

“It’s going to be buzzing in there on the night. My support will be right behind me because this is a big fight. It’s a real roll of the dice and roll on December 7. Guess who’s back?!”

Rose (29-5-1-KO8) said: “I watched Keeler against Conrad and it was a great fight for the fans so hopefully we can bring more of the same.

“I expect to be favourite given what I’ve achieved but I’ve been out nearly two years so people questioning what I’ve got left is inevitable. What they don’t know is that I feel reinvented and back to where I was five or six years ago.

“He might have youth and activity on his side but I’ve got experience. I’ve been in so many big fights and I can do 12 rounds standing on my head. Can he?”