Canelo willing to fight GGG in trilogy fight on DAZN 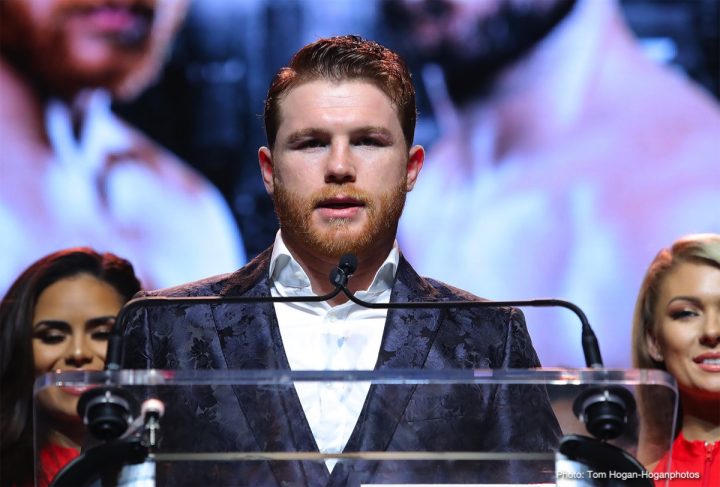 By Dan Ambrose: Saul Canelo Alvarez says he’ll be willing to give former middleweight champion Gennady Golovkin a trilogy fight as long as he signs with DAZN.

If Golovkin chooses to go in another direction to sign with ESPN, then the chances of a third fight between them will drop off, as Canelo is tied to DAZN for the next five years of his career.

The 28-year-old Alvarez signed a 11-fight, $365 million contract with DAZN recently. It’s a lot of money for Canelo, but he doesn’t have a big name to fight with the streaming company.

“We made two, why not make a third?” Canelo said via Michael Benson.

If the only big money fight GGG has available to him is Canelo, then it might not make sense for him to ink with DAZN. At best, Canelo will only fight Golovkin one more time and that’ll be it. If the third is as controversial as the first time, it would be poison for GGG and Canelo to fight a fourth time. The boxing public would simply lose faith in the judging system and the oversight by the boxing commissions. It’s already to the point where boxing fans see the outcome of the Canelo vs. GGG fights as predetermined with the Mexican star already picked out as the winner by the judges. It would have been nice if the judges had made up for the controversy of the first Caneo vs. GGG fight last year and gotten the results correct in the rematch last September in Las Vegas, but unfortunately it was the same controversial result. Once again the fight took place at the T-Mobile Arena in Las Vegas, Nevada, and once again, Canelo was given a decision that the boxing public didn’t agree with.

It’s believed that Golovkin, 36, will ultimately sign with DAZN, seeing that there’s so much more money for him to make fight Canelo in a third fight than it would for him to fight six or seven less popular fighters on ESPN. The only it makes sense for Golovkin to sign with ESPN is if they can give him a monstrous contract that makes it worthwhile for him to sign the fight.

DAZN will be making a big push to sign GGG, for the reason they badly need him for a big triligy fight against Canelo Alvarez. Matchroom Boxing USA promoter Eddie Hearn has accumulated some of the best talent at middleweight in Demetrius Andrade and Daniel Jacobs, but those aren’t guys that will attract a lot of attention in the way that Golovkin will in facing Canelo. Those are excellent fighters, but they’ve failed to attract the interest from the boxing public the way that GGG has. Andrade and Jacobs are both in their 30s now. It’s likely that they’ve pretty much tapped out in terms of their popularity in the sport. The problem that holds those two back is that they lack the exciting fighting style that the boxing fans like to see. Golovkin has that style, as does Canelo when he’s not imitating Floyd Mayweather Jr.

“The plan at DAZN is to make big fights,” DAZN executive vice president Joe Markowsky said to ESPN.com. “We’re engaging in conversations. GGG is right at the top of our list. We have funds to back up what we want to do. They are not limitless funds but funds to do things that make sense.”

It’s hard to imagine that DAZN will offer Golovkin the same kind of money that Canelo was given. The way that Canelo’s contract amount was broadcast out in the open for the world to see, it could make it tough for DAZN to sign Golovkin if what they offer to him is far short of that amount. GGG and the boxing world believe that he was robbed in his two fights against Canelo in Las Vegas. For GGG to accept a much smaller contract than the one Canelo was given, it might rub him the wrong way and make him feel that he was given a fair shake. DAZN could use a fighter like Golovkin to help increase the subscriptions, but it’s important that they stay cognizant of the fact that Gennady feels that he’s still unbeaten at 40-0, and that he was dealt a cruel blow with the way the judges scored his two fights against GGG in Las Vegas.

Signing with ESPN will likely result in Golovkin being seen by more boxing fans in the U.S, as a massive amount of people have ESPN. They would be giving previews and a lot of publicity for GGG’s fights. The downside is Golovkin would only have Rob Brant and Ryota Murata to fight. Those aren’t big names. Of course, if GGG signs with DAZN, he would have Canelo for likely just one fight. There would be very little interest in GGG fighting Andrade and Jacobs, as those are defensive fighters that lack large fan bases.

Golovkin had jump through a lot of hoops to get his two fights with Canelo. First off, Triple G had to wait three years until he was 35-years-old before he got his first fight with the Mexican star. Golovkin was 32-year-old and in his prime when he first started asking for the Canelo fight. GGG was told that Canelo wasn’t ready to fight at middleweight, even though it was rumored that he was rehydrating to the 170s for his fights since 2014. Golovkin weighs in the low 170s when he rehydrates for his fights. When Canelo and his promoters at Golden Boy Promotions did eventually face him, they insisted that the fight take place in Las Vegas, which is where Alvarez fights all the time. Golovkin made the mistake of agreeing to fight Canelo in Vegas, and the result was he failed to get the victory in the first fight. The perception from the boxing public is GGG beat Canelo by a 116-112 score. The three judges were all over the place with their scores for the first fight. One judge had Canelo winning by a wide 118-110 score, while another judge had it even at 114-114. That judge gave Canelo what appeared to be Golovkin’s best round in giving him the 7th. The scoring for the rematch was just as bad. Once again, Golovkin arguably made the mistake of agreeing to fight Canelo in Las Vegas, and he ended up losing the fight. Would the outcome of the fight been different if it had taken place in a neutral city where the judges might be more inclined to give it to GGG? You have to believe that would have been the case.

Canelo will be fighting next month against WBA World super middleweight champion Rocky Fielding on December 15 on DAZN at Madison Square Garden in New York. This is a weak move on Canelo’s part, taking what boxing fans see as the poorest of the champions at 168. If Golovkin moves up to super middleweight in 2019, he could be facing Callum Smith. That’s the guy is considered to be the best fighter in the 168 lb division today. Canelo should have been fighting Smith to show the boxing fans that he’s willing to face the best champion, and not simply look to pad his record by fighting vulnerable champions.


« Fury vs. Wilder: Is there anything left to say?