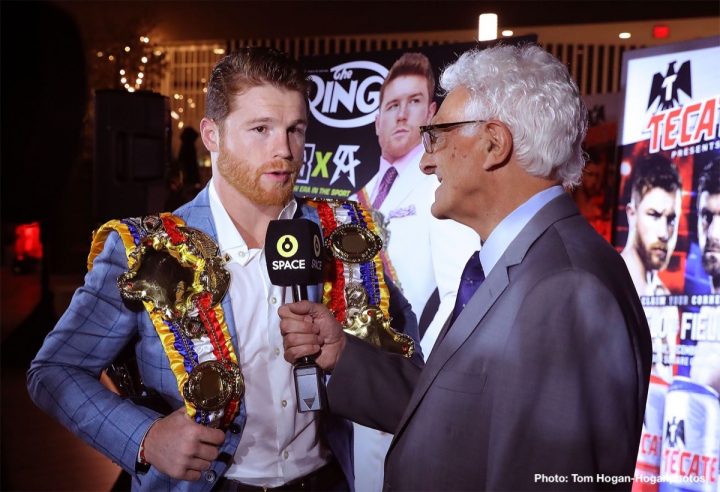 By Logan Garcia: Saul Canelo Alvarez (50-1-2, 34 KOs) says he’s now ready for revenge against Floyd Mayweather Jr. to pay him back for his loss to the superstar five years ago in 2013. Canelo, 28, has taken Mayweather’s place at the #1 pay-per-view star in the sport, and he’s peaking rather than just starting out like he was five years ago when they fought.

Canelo would like nothing more than to get Mayweather in the ring to show what he can to him now that he’s in the prime of his career. Mayweather would need to figure out another way for him to win a second. He couldn’t count on Canelo’s youth, inexperience and weight problems. Canelo now has the experience, and he’s no longer the 22-year-old kid that fought Mayweather in 2013.

Canelo is hoping that Mayweather will look his way and return to boxing. What Mayweather is doing now isn’t boxing. He’s picking out popular MMA fighters to beat in novelty fights. Those are celebrity matches rather than a sporting events.

“Anytime he’s ready, I’m ready,” Canelo said to USA Today when asked if he’s ready to fight the 41-year-old Mayweather in a rematch.

It would be wise for Canelo not to hold his breath waiting for Mayweather to setup a rematch with him, for the reason being it’s probably not going to happen. Mayweather is talking about fighting another MMA guy (Tenshin Nasukawa)in his next novelty match, which is supposed to be a 3-round exhibition. After that, Mayweather and Manny Pacquiao could be facing each other in a rematch in 2019. A second Mayweather vs. Canelo fight would make huge money for both fighters. There would be massive appeal from the boxing public in seeing a second fight between the two stars. It would be a difficult fight to negotiate due to Canelo fighting on DAZN and Mayweather on Showtime, but it wouldn’t be impossible to do. It would take some give and take on both sides for the match to get made. Mayweather’s requirement of nine figures for his payday might be a difficult hurdle to leap through. Mayweather can make nine figures when he’s getting the lion’s share of the revenue against a less popular fighter, but he couldn’t do that with the highly popular Canelo. He would want close to an even split with Mayweather if not more. Both guys getting $100 million is unlikely.

Mayweather beat Canelo by a 12 round majority decision in a catchweight fight at 152 pounds in Las Vegas, Nevada on September 13, 2013. That was a fight that took place before Canelo had fully matured. He was fighting a much older and far more experienced 36-year-old

“If the day comes that he wants to come out of retirement for it, I’m a different fighter, I’m more mature, I’m a great, A-level fighter now and it would be a great opportunity.”

Mayweather has become risk adverse at 41, and he’s not talking about wanting to face the difficult fighters in boxing like Canelo, Errol Spence Jr., Terence Crawford, Danny Garcia, Shawn Porter or Keith Thurman. Mayweather no longer wants to test himself against the best. No one is pushing Mayweather to fight Gennady Golovkin, Jermall Charlo, Jarrett Hurd, Jermell Charlo, Jaime Munguia, Erislandy Lara or Demetrius Adrande. Canelo is special. He would try and box Mayweather, and it would a nice tactical chess match between the two of them like the first fight was, but much closer due to the improvements Alvarez has made to his game. Alvarez is like a sponge. He learns and improves from every fight. He learns and adapts, and incorporates aspects of his opponents’ fighting style to use for himself. It’s something that’ unique about Canelo. His trainers can’t take credit for that. Canelo does that on his own.

Canelo would be a major step up for Mayweather from the guys he’s been facing in the last two years of his career.

Mayweather handed Canelo his only career loss in his 53-fight careers a as a pro.
.
The 28-year-old Canelo will be fighting next month against WBA World super middleweight champion Rocky Fielding (27-1, 15 KOs) on December 15 on DAZN at Madison Square Garden in New York. Canelo wants to add a third division world title to his collection. In addition, Canelo hasn’t ruled out moving up to light heavyweight to go after a world title in that weight class in the near future. It’s not something Canelo is thinking of doing right now, but it’s a move that he could make in the future.

“I’ve always had that little itch for (a rematch) since way back, and now I’m more experienced and more mature,” Canelo said. “It’s a fight that maybe will happen and will be a great experience.”

If a rematch between Canelo and Mayweather is going to happen, it will need to happen soon. Mayweather is getting older, and he’s not going to want to risk having his record marred by a bad knockout loss to Canelo. Mayweather has done a good job of his opponent selection during his career, especially as of late. When Mayweather was signed to Showtime for his big money contract with them, he made sure he mixed in a lot of soft fights against the likes of Marcos Maidana, Robert Guerrero and Andre Berto. Those were all safe fights for Mayweather. The only difficult fights Mayweather has had in the last six years was Miguel Cotto and Manny Pacquiao.

Recently, Mayweather made an announcement that he was going to be coming back to face Pacquiao in a rematch. The timing of the announcement came right before the September 15 rematch between Canelo and Gennady Golovkin. It looked to some like Mayweather was trying to upstage the Caenlo-GGG2 fight like he did the first time around when he place his fight against Conor mcGregor ahead of the Canelo vs. Triple G fight last year.

For a second fight to have a chance of being made, Canelo would need to compromise with Mayweather over the weight. He’s not going to be able to get Mayweather to come all the way up to 160 to fight him, seeing as his frame is too small for him to fight in the 160 lb weight class. Mayweather might even insist on a rehydration clause for a second day weigh-in.

Terence Crawford vs. Luis Collazo in the works for March 23 »