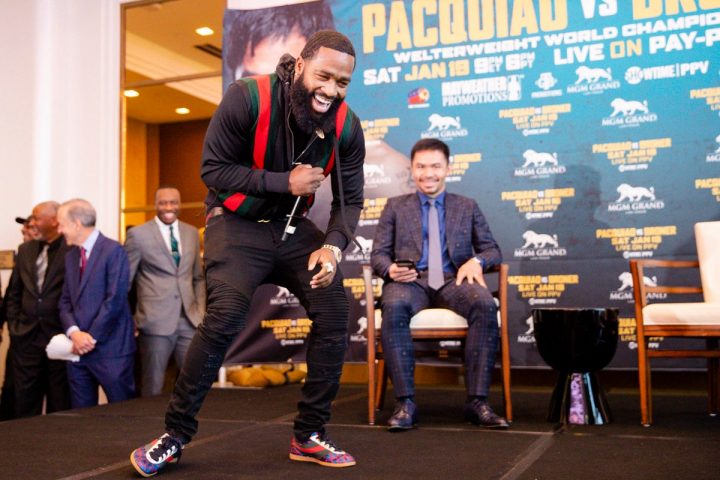 By Chris Williams: Adrien ‘The Problem’ Broner (33-3, 24 KOs) plans on foiling Manny Pacquiao’s plans for a rematch against Floyd Mayweather Jr. when they face each other on January 19. Broner, 29, says he’s not taking the fight against Pacquiao (60-7-2, 39 KOs) for the money. He’s coming to win.

Pacquiao is probably having the most fun during a promotion than he’s had in years. He clearly enjoys Broner’s trash talking, and he doesn’t seem to take him seriously as a threat to beating him. It would obviously be a different story if Pacquiao was facing someone that was trash talking him and had the talent to beat him like Errol Spence Jr. Pacquiao might be so career free in the lead up to a fight against Spence, since the chances of him being knocked out once again would be high.

Broner is the underdog in the fight, and it’s going to take a great performance from him to prove the odds-makers and doubters wrong. They just see Broner as a guy that fails when he takes on the best at 140 and 147. And while the 39-year-old Pacquiao may no longer be the best at welterweight, he’s certainly in the mix in the top six in the weight class.

“January 19, I am coming to win. F*** the money, I’m going to be victorious. They keep talking about a Pacquiao-Mayweather 2, but I’m going to f*** those plans up. I just don’t see Manny Pacquiao beating me,” Broner said.

The bad luck Broner experienced in his last two fights against Jessie Vargas and Mikey Garcia would suggest that he’s not going to beat Pacquiao on January 19. Broner gave away the first six rounds in both of those fights, and he had to rally in the second half of both fights to keep from being completely embarrassed.

The speed, power and experience advantage for Pacquiao will be key. He’s a lot faster than Broner, and he’s got the experience on his side. Broner has fought some good guys during his career, but not to the same extent as Pacquiao. Broner’s best opponents as a pro have come against these fighters: Marcos Maidana, Shawn Porter, Paulie Malignaggi, Jessie Vargas, Mikey Garcia, Antonio DeMarco, Vicente Escobedo,Daniel Ponce De Leon, Adrian Granados and John Molina Jr. Those are good fighters, but not even close to the opposition that Pacquiao has faced during his 23-year pro career.

“[Broner’s] a funny guy. I think after his boxing career, he could have another career as a comedian,” Pacquiao. “I don’t get upset about the jokes. I can’t help but laugh when I look at his face.”

Broner isn’t perceived as a threat to Pacquiao, so he’s going to laugh at him up until the fight. It’s up to Broner to show Pacquiao that he has the talent to beat him and take his World Boxing Association ‘regular’ 147 lb title. It would be the second time in Broner’s career that he’s won the WBA welterweight title. Broner defeated Paulie Malignaggi by a controversial 12 round decision five years ago in 2013 to win the WBA title. Although a lot of boxing fans thought Malignaggi deserved the win, Broner was the hot hand at the time, and the judges gave him the ‘W’. Broner didn’t keep the WBA belt for long though, as he lost it in his first defense against Marcos Maidana in December 2013. Broner’s career has been a seesaw ride ever since the loss to Maidana. Broner won the WBA World light welterweight title in 2015 in beating Khabib Allakhverdiev, but then he lost it in his first defense against Ashley Theophane when he failed to make weight for the fight.

Broner has talent, but he’s failed to dedicate himself to his craft to become the fighter that the boxing world thought he would be. He was supposed to be the replacement for Mayweather. Instead, Broner has been underachiever who nowadays is used as an opponent for A-side fighters.