Zhang Zhilei and Meng Fanlong to fight on Nov.24 on DAZN 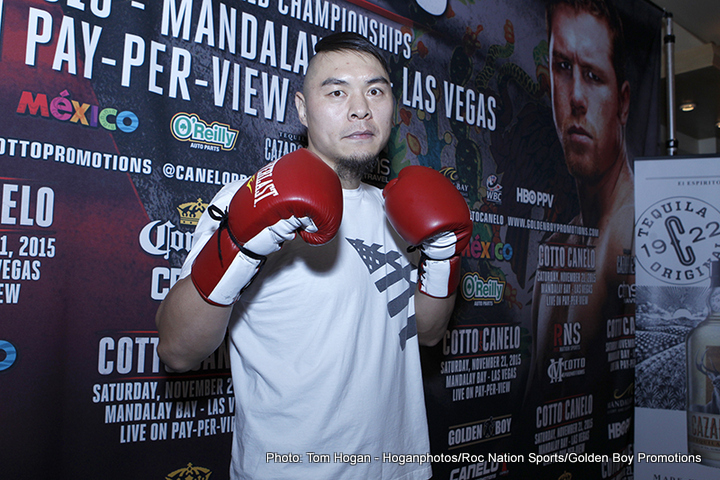 Zhilei will serve as one of the event’s headliners in the biggest fight of his career, as the 35-year-old defends his WBO Oriental Heavyweight title against Alexander Ustinov (34-2, 25 KO’s). Meanwhile, Fanlong (13-0, 8 KO’s) – the reigning IBF Intercontinental Light Heavyweight champion – will take on England’s Frank Buglioni (23-3-1, 16 KO’s) in his most high-profile fight to date.

“I really want to thank our friends Eddie Hearn and Frank Smith for giving us such a great platform. This card will be an incredible opportunity for Zhilei and Fanlong to showcase their skills in front of a global audience,” Roc Nation Sports promoter Dino Duva said. “Both fighters are absolute stars in the making and I know they’re looking forward to shining on an international platform in what are by far the toughest fights of their careers.”

For Zhilei, he’s looking to topple Ustinov and pave the way for a potential world heavyweight championship fight against titleholder Anthony Joshua. If the bout comes to fruition, it would serve as a rematch from the quarterfinals of the 2012 London Olympics, when Joshua defeated Zhilei en route to winning the super heavyweight gold medal.

In the meantime, Zhilei – ranked No. 6 in the world by the WBO – will be looking to maintain his momentum after defeating Don Haynesworth in front of his fans in China on September 28 via a third-round TKO.

Fanlong, however, has his sights set on propelling his ascension toward the top of the light heavyweight ranks. This fight will mark Fanlong’s first fight since July 20, when he defeated Chris Eppley via first-round TKO at the WinnaVegas Casino & Resort in Sloan, Iowa.

Tickets for November 24 start at €400 and will be available to purchase via www.montecarlolive.com, emailing ticketoffice@sbm.mc.

Dillian Whyte with few options for Dec.22 if Chisora fight isn’t made »