Whyte vs. Chisora rematch the goal for manager Haye 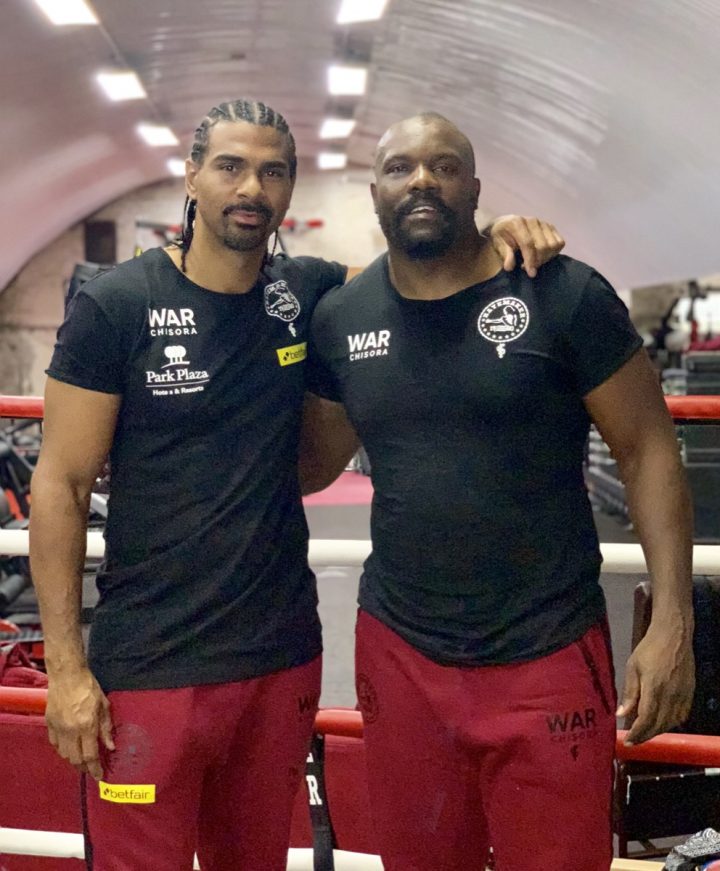 By Scott Gilfoid: Dereck Chisora (29-8, 21 KOs) and his new manager David Haye’s focus is for them to get a rematch with Dillian Whyte (24-1, 17 KOs) for December 22. According to promoter Eddie Hearn, Chisora has competition in looking to get the fight against Whyte in Luis ‘King Kong’ Ortiz and Dominic Breazeale.

Last week, Hearn said that if the Whyte vs. Chisora 2 negotiations weren’t done by this week, they would have to move on and look at his other options for Dillian. However, it’s now Wednesday and Hearn isn’t making a peep about Whyte moving on despite the fight with Chisora not having been made, and it’s not looking like it will get made by this week.

The only thing I can say about Chisora’s chances for a win over Whyte is he had better make sure he knocks him out, because we could see another controversial decision win for Dillian. After witnessing the poor officiating of Whyte’s last fight against Joseph Parker last July in which the referee Ian John Lewis gave Dillian credit for a beautiful head-butt knockdown in round 2, I don’t have much faith in Chisora getting a decision against him in the rematch. If Chisora had better conditioning, he’d have a chance of knocking Whyte out, but unfortunately he’s not likely going to be able to throw enough punches to get him out of there without needing to back off and take a rest break.

Like many boxing fans, Haye thought that Chisora deserved the decision win over Whyte two years ago in their fight in December 2016. Whyte was given a 12 round split decision, which angered a massive amount of people. Boxing News 24 had Chisora up by four rounds in that fight. Its unclear what fight the two judges were watching that scored it in favor of Whyte, but it obviously wasn’t the one that took place on the night.

“There is nothing else. I want the rematch,” Chisora said. “We are going to make it happen for the fans.”

Well, I have to say that if Chisora and Whyte want to do something for the boxing fans, they won’t fight each other right now. Whyte-Chisora should wait until 2020 before facing each other again, because the fight boxing fans want to see right now is Whyte vs. Luis Ortiz (29-1, 25 KOs). That’s the match that the fans want to see, not the retread fight between Dillian and Chisora. You can understand why Whyte wants to fight Chisora so badly, because it’s a guy that he has a good chance of taking it the full 12 round distance against like last time. As we saw last time they fought each other, Chisora got the short end of the stick when it came to the judges’ scoring. You have to suspect the same thing will happen when/if they face each other in a rematch, because Dillian will once again be the A-side, and that counts for a lot.

The winner of Whyte vs. Chisora has a very good chance of being the opponent for IBF/WBA/WBO heavyweight champion Anthony Joshua’s opponent on April 13 at Wembley Stadium in London, England. So, we’re basically talking about the Whyte-Chisora fight being an eliminator type of fight to get a fight to select the next opponent for the 6’6″ Joshua on the 13th of April.