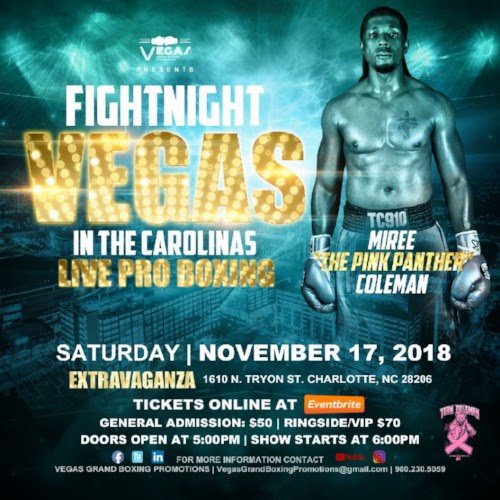 Doctor is ready! Medics and EMS are scheduled and ready! Fighters are Ready! Vegas Grand Boxing Promotions has completed their fight checklist and they are ready to put on a spectacular boxing show Saturday, November 17, 2018, at The Extravaganza in Charlotte, North Carolina.

Lavonda Earley-Stacey has taken some lumps in life both personally and professionally, but she has found a way to overcome and be a successful mother and businesswoman. Her life as a promoter is no different. She made an error, owned up to her mistake, truly felt bad, apologized, and is now ready to move forward. “I can’t forget and I will never forget how we let down the fans and the fighters. The only way I can change the past is by building a beautiful future for both the fighters and the fans. I am 100% focused on that. November 17 is going to be a big moment for Charlotte, the fans, the fighters, and me, because this is going to be how they judge me and the product Vegas Grand Boxing Promotions presents. This is going to be really special, because I guarantee fans and fighters will feel like they are experiencing Vegas in the Carolinas. We will not disappoint, because we are wired for success,” says Earley-Stacey.

November 17th, billed as Vegas In The Carolinas, includes the heated WBF title fight and rivalry between the Marine JacQuan “Da King” Townes and the Army vet Miree “The Pink Panther” Coleman. Also scheduled to compete on this star studded card are Lai’d Tapia, Monika Harrison, PBC star Chordale “The Gift” Booker, Deandre “The Matrix” Robinson-Neal, Michael “Double Clutch” Englert, Edvis “Hands On Deck” Galloway, and the Wonder Boy Michael “150%” Williams Jr. To make the night even more spectacular, former world champion, HBO analyst, and arguably one of the greatest athletes and fighters of all time Roy Jones Jr. will be in attendance. But wait, there is more! Much, much more, so you will need to stay tuned to Vegas Grand Boxing Promotions for breaking announcements. If ever there was a fight in the Carolinas you did not want to miss, Vegas Grand Boxing Promotions’ “Vegas In The Carolinas” is the one you can not afford to miss.