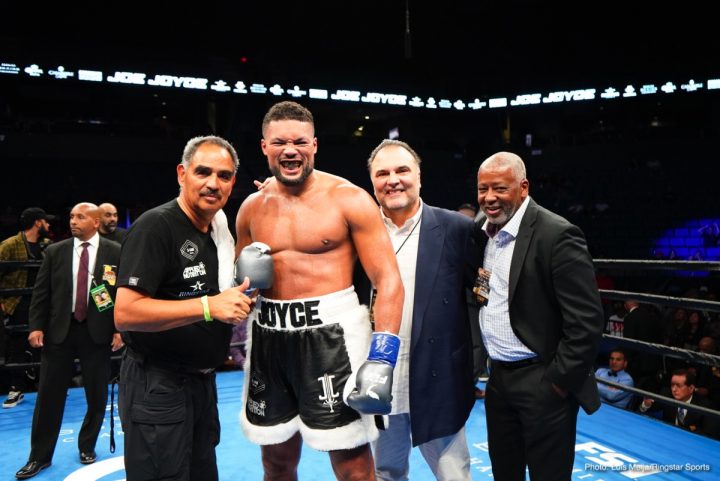 Fury needs a sparring partner that has punching power and an aggressive fighting style like the one that he’s going to be dealing with when he gets inside the ring with the big 6’7″ Wilder on the 1st of December on Showtime PPV at the Staples Center in Los Angeles, California.

Joyce, 33, will be helpful to Fury (27-0, 19 KOs) to prepare for Wilder up to a certain point. While the 6’6″, 263 pound Joyce has similar height as Wilder, he’s a lot slower and heavier than him. Wilder weighed in at 214 pounds for his last fight against Luis ‘King Kong’ Ortiz last March. Joyce doesn’t possess the same cat-like physique and quickness that Wilder possesses.

“He is coming to train alongside me in California and we are going to help each other,” Joyce said to thesun.co.uk. “When I last sparred him he was a bit overweight so I took it easy on him. He is a good fighter, he’s a laugh and he’s very mobile now. He was a nightmare to hit.”

Wilder has fast hands and a long reach, which will enable him to connect with his power shots against unlike former heavyweight champion Wladimir Klitschko, who couldn’t lay a glove on him in their fight in 2015. Wladimir was hesitant to throw punches against Fury, because he was missing so often. Wilder doesn’t worry about missing with his shots because he reloads with his shots in close after a missed punch and he’s able to still hit his opponent with a lot of power. Fury will need to do more than just try and make Wilder miss all night long for him to have a chance of beating him. Just dodging Deontay’s punches won’t be enough for Fury to win the fight.

Joyce dispatched Iago Kiladze in five rounds last Sunday night in his U.S debut in the co-feature bout on Premier Boxing Champions on FS1 and Fox Deportes at the Citizens Business Bank Arena, Ontario. It was unquestionably the best performance to date in Joyce’s two-year pro career in beating a good heavyweight. Joyce knocked Kiladze down three times in the fight before the bout was stopped. Joyce is now being trained by former middleweight champion Gennady Golovkin’s trainer Abel Sanchez in Big Bear, California. This was the first time in Joyce’s pro career that he’s fought in America, and he did a god job.

Joyce sparred with Fury previously when he was heavier, and not nearly the shape he’s in now. Joyce says he took it easy on Fury when he was sparring with him before due to his conditioning. For Joyce to be helpful to Fury now, he’s going to need to fight all out to give an approximation of what he’s going to be dealing with when he gets inside the ring with Wilder on the night in December. Taking it easy on Fury right now is the last thing he needs. Fury needs sparring partners that are going to be going right hand crazy in training the way that Wilder does. That’s another thing that makes Joyce different from Wilder.

Choice is more of a combination puncher than a guy that looks to blast out his opponents with a single right hand the way Wilder does. Wilder isn’t a combination puncher, because he doesn’t need to for him to score knockouts. When Wilder is trying to knockout his opponents, he throws single right hands with major power. He’s similar to former five division world champion Thomas ‘Hitman’ Hearns (61-5-1, 48 KOs). Also known as the ‘Motor City Cobra,’ Hearns had one-punch power that enabled him to win world titles at 147, 154, 160, 168, 175 and 200 pound divisions. Wilder doesn’t need to look like a football player to generate huge power. He’s capable of taking out his opponents with one punch. Joyce is not going to be able to get Fury ready for what he’s going to be facing against Wilder in the real sense. The only thing that Joyce can help Fury with is getting him used to fighting a tall guy, which is the only thing he has in common with Wilder. Joyce and Wilder are almost the same height.

If Monday’s kickoff press conference in London was any indication of how things are going to be on December 1 in the Wilder-Fury fight, the 6’9″ Fury is going to need as much good sparring as possible to get him ready for what he’s going to be dealing with when he gets inside the ring with Wilder. Fury and Wilder needed to be separated at the press conference on Monday after Fury challenged him to spar. Fury’s promoter Frank Warren helped keep the two fighters separated. Wilder looked like he wanted to throw a punch at one point.