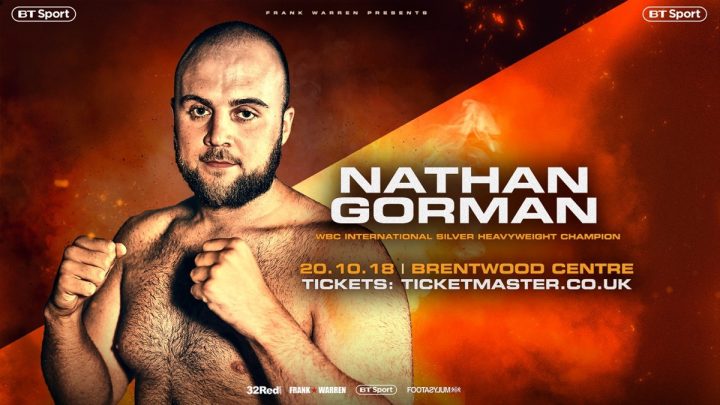 RICKY HATTON has revealed that heavyweight hope Nathan Gorman is nagging him for a showdown with bitter rival Daniel Dubois.

Both men are promoted by Frank Warren and a clash between two of the divisions biggest prospects looks certain for the future.

Promoter Warren will be keen to match them inside 18 months and Hatton is also patient, but Gorman is on his trainer’s case pleading for the contest.

They sparred during their amateur days on the GB squad and British ring great Hatton revealed: “Nathan must hound me every week about fighting Daniel Dubois.

“He says he has sparred with him when they were on the GB squad and Nathan words, not mine are that he has ‘never lost a round to him.’

“He is itching for that, but I tell him he has got to give it time.

“We’re heading in the right direction with Frank. I have told Nathan don’t worry about Daniel – just concentrate on yourself, keep improving and adding to your fan base.

“He is a lovely kid, not arrogant. He just has confident in his own ability to what he can do if he gets the chance to fight Dubois.”

News:
Tyson Fury Is “The Man” Insists Dubois As He Threatens To “Beat The Hell” Out Of Joe Joyce

Gorman (13-0) is in action on Warren’s card at the Brentwood Centre on Saturday (Oct 20th) and hopes Dubois who lives nearby in London’s East End will be ringside.

Hatton added: “Believe you me he can’t wait to go to Brentwood which you could call Daniel’s back yard and put a show on.

“When Nathan and I fancy the fight it is not being disrespectful to Daniel. I don’t BS, tell tales or feel the need to publicise my fighter.

“Daniel showed a lot of improvement against Kevin Johnson – a good punch volume and stamina, but I’d be surprised if Johnson threw 50 punches in the fight and that is no exaggeration.

“You have to pat Daniel on the back and he showed improvement, but we’re up for the fight and it is now in the hands of Frank.”

Anthony Yarde will be headlining the Brentwood Centre on October 20th when he faces Argentinian Walter Gabriel Sequeira. World title challenger Gary Corcoran and Johnny Garton will contest the vacant British welterweight title. Zak Chelli and Umar Sadiq will both be putting their young, undefeated records on the line in a super-middleweight contest. Heavyweight Nathan Gorman will also feature along with IBF European Middleweight Champion Joe Mullender on the show televised live on BT Sport.

Remaining tickets are available at the Brentwood Centre box office or via calling the Queensberry Promotions Box Office on 01992845710.

NATHAN GORMAN will be slimmed down by trainer Ricky Hatton to help him add even more power to his armoury.

The 22-year-old might not be built like an Adonis, but he and Frank Warren stablemate Daniel Dubois are both winning plaudits and on a collision course to face each other.

British boxing great Hatton said: “Nathan’s power is developing because he’s maturing and more suited to the type of training we do.

“We have him doing a bit of strength work and we’re trying to slim him down a little bit.

“He is never going to be a body beautiful because some people aren’t built that way. We can’t all be built like Anthony Joshua or Daniel Dubois.

“But he is solid enough, Making him a little bit leaner and explosive will give him advantages. That is the theory behind that.

“He is also improving technically and punching with his whole body now. When he first came he was still a little bit of a rookie and arm punching.

“He is punching nastily and along with his speed and boxing ability which he is known for he is coming into his own.”

The Nantwich boxer has fought twice so far this year, and in June impressively beat good Irishman Sean Turner.

Hatton hopes that promoter Warren will find a spot for his protege on the Josh Warrington v Carl Frampton world title undercard in Manchester on December 22.

“Nathan had his career best win against Sean Turner, but we’re looking to move on from that and impress further,” added former two-weight world champion Hatton.

“He is still only a baby, but in his last fights showed what he is capable of and all about. He hasn’t even scraped the surface for what is to come.

“It looks like we’re having two fights before the end of the year and that will cap a lovely 2018 for us.”