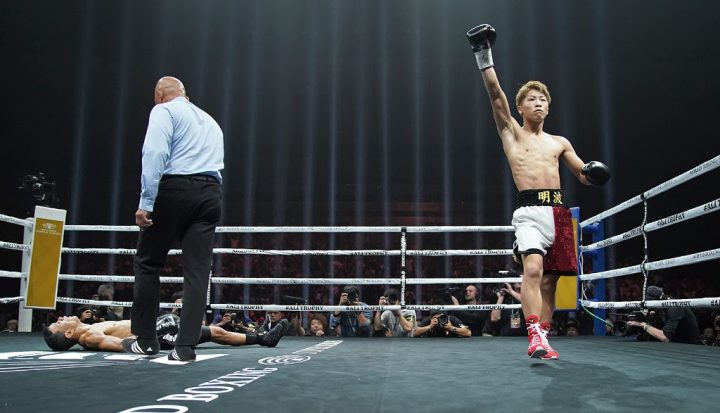 Naoya Inoue KO’d Juan Carlos Payano after only one minute and ten seconds of the first round, and Kiryl Relikh went through twelve tough rounds against Eduard Troyanovsky to score a unanimous win in Sunday’s Ali Trophy Quarter-Finals at the Yokohama Arena, Yokohama.

“I am going for the KO, I am going to finish him,” said Inoue to WBSS’s reporter in Yokohama shortly before entering a sold-out arena modeled after famous Madison Square Garden.

Flash forward to a stunning, lighting-fast left-right combo from the ‘The Monster’ that floored Payano and sent shockwaves throughout the world of boxing.

“I am normally not a person who brags, but I said that I went for the KO to put myself under maximum pressure,” said Inoue.

The 25-year-old local hero, Inoue (17-0, 15 KOs) made the first defense of the WBA ‘Regular’ world bantamweight title he won by stopping Britain’s Jamie McDonnell in the first round of his previous fight.

The 34-year-old Payano (20-2, 9 KOs) from the Dominican Republic, a former bantamweight world champion, was stopped for the first time since making his debut eight years ago.

In the semi-final, Inoue will face the winner of the Emmanuel Rodriguez vs Jason Moloney quarter-final that takes place on October 20 in Orlando, Florida.

Earlier in the evening, all three judges scored the opening super-lightweight quarter-final of Season II 115-113 in favour of Belarus’ Kiryl Relikh (23-2, 19 KOs) in his clash with Russia’s Eduard Troyanovsky.

“It was a tough fight,” said 29-year-old Relikh who also defended his WBA World Super-Lightweight Championship for the first time. “I went for the KO so I am not happy with my performance. I saw that I hurt him, but I was surprised I couldn’t finish him.”

“I want to congratulate Kiryl,” said Troyanovsky. “It was an emotional fight, my first 12 rounder, and I want to say thanks to Kiryl for a good fight. I did my best.”

Relikh will take on either Puerto Rico’s Manny Rodriguez or Australia’s Jason Moloney in the semi-finals. Rodriguez vs Moloney will also be settled on October 20 in Orlando.