Rodriguez vows to shine in from of countrymen in Orlando 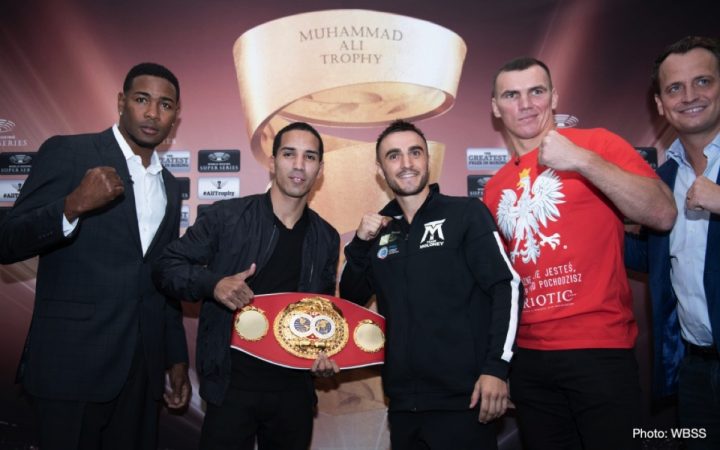 Emmanuel Rodriguez (18-0, 12 KOs) is “doing it for Puerto Rico” when he makes the first defence of his IBF World Bantamweight title against unbeaten Australian Jason Moloney (17-0, 14 KOs) in the Ali Trophy Quarter-Final on Saturday at CFE Arena, Orlando, Florida.

“I feel very good, I can’t wait for Saturday night,” said Rodriguez. “We are going up against an undefeated opponent and he has my respect. I’ve seen videos of Jason and he is fast, intelligent and knows how to use the ring,” said the highly-skilled Puerto Rican.

“But I‘ve fought better opposition than him and there will be no doubt that I will walk away with the victory on Saturday.”

Despite fighting away from his native Puerto Rico, Rodriguez can expect massive support from his countrymen. Over 135,000 Puerto Ricans relocated to the USA after last year’s devastating Hurricane Maria and thousands settled in Orlando.

“It’s great to be fighting in Orlando, Florida because there will be a ‘Little Puerto Rico’ supporting me at the arena,” said Rodriguez. “I want no surprises on Saturday, and the victory will be for my people of Puerto Rico.”

Rodriguez won the IBF title in May when he dropped former world champion, Paul Butler, twice and dominated him over twelve rounds for a superior unanimous decision win. A star was born, experts said. And the chance of conquering the whole world is now on ‘Manny’s’ radar.

“I always wanted to face the best and the best are in this tournament,” said Rodriguez. “Winning it would make more fans know me and this division which is great. I have prepared myself to go all the way and bring back the Muhammad Ali Trophy to Puerto Rico.”

The winner of Rodriguez vs Moloney will face Japanese ‘Monster’, WBA Champion Naoya Inoue in the semi-final, a sensational IBF and WBA unification bout is on the horizon.

The second Ali Trophy quarter-final bout of the huge night of boxing on Saturday the CFE Arena in Orlando is a cruiserweight clash between Cuba’s Yunier Dorticos and Poland’s Mateusz Masternak.

The winner of Dorticos vs Masternak faces USA’s Andrew Tabiti who beat Russia’s Ruslan Fayfer unanimously on points in their quarter-final in Ekaterinburg, Russia.

Jason Moloney: “I am not leaving the ring without the World title”

Rodriguez-Moloney & Dorticos-Masternak went head-to-head in Orlando after confident words from the top table at Thursday’s press conference ahead of Saturday’s Ali Trophy Quarter-Finals at the CFE Arena in Orlando.

“I am looking forward to Saturday,” said Rodriguez. “I feel good, and I hope Moloney is in great shape because he is going to fight a real fighter.”

A big Puerto Rican crowd is expected to support Rodriguez on Saturday.

“It is really an honour to be the first Puerto Rican to defend his title in Orlando. I am ready to put on a great show in front of my countrymen.”

Jason Moloney has – not surprisingly – completely other plans for his night on Saturday. In the build-up for the fight he has promised to ‘shock the world’, and at Thursday’s press conference he continued his confident attitude.

“I am here to achieve my dream and become world champion,” said Moloney. “Preparations have been absolutely perfect. We have been here for three weeks. We have done everything to make sure it is possible to achieve my dream. I want that world title more than anything in the world and I am not leaving the ring without it.”

“I am coming to this tournament as a bit of an underdog, but I am here to make a statement. He to show what I am capable of.”

The second quarter-final on Saturday is cruiserweight clash between Cuba’s Yunier Dorticos, a former WBA world champion and a semi-finalist of Season I one of the World Boxing Super Series, vs Poland’s Mateusz Masternak, a former European Champion.

“On Saturday I am going for the knockout. Everyone knows that I always dome to do a great fight and that is what you will see on Saturday.”

“I am here to prove that I am the best. That’s why I’m back. I’m going to win this tournament.

A cool and calm Masternak said the fight is important for his further career.

“I am very happy to be in the tournament, and I believe I will beat Dorticos. Our styles speak for themselves and simply we just have to see what happens on Saturday.”