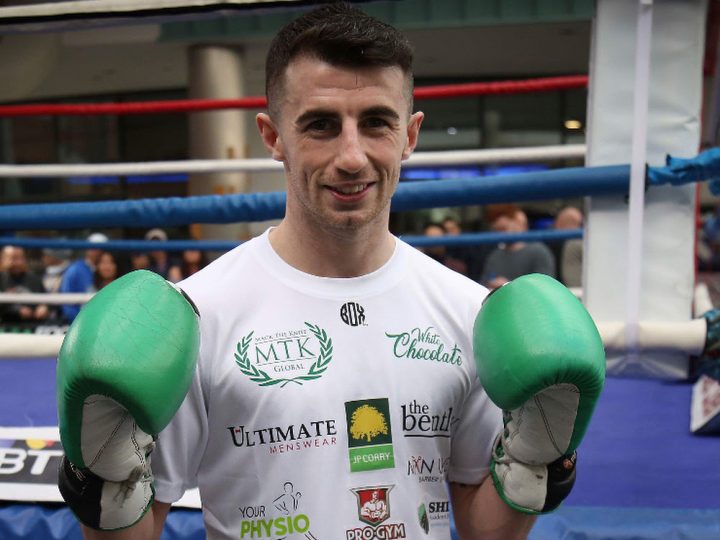 The unbeaten Tyrone McCullagh has a dream of fighting TJ Doheny for the world title but must first overcome Josh Kennedy on Friday night and seize the WBO European super-bantamweight crown.

McCullagh and Kennedy put flawless records on the line as the headline act of a glittering MTK Global show at Belfast’s Titanic Exhibition Centre on Friday – with ‘White Chocolate’ looking to follow up the Celtic crown he won last time out.

McCullagh said: “I always want more so I plan to win this and then of course the end goal is a world title. I’m competitive in everything I do and I hate to lose so I want to get to the top of boxing.

“It’s a hair-raising thought and I’d love to fight for a world title. I know MTK Global has just signed TJ Doheny, who’s a world champion.

“TJ has spent his whole career in Australia and it would be a great homecoming fight. He’s done very well for himself. It makes sense for him to defend his title back home and we’re with the same management now.

“First, I’ve got to get past Kennedy and get that European title. This is a great show and the talent in Belfast at the moment is unbelievable. It must be a headache for MTK Global to choose who to put on because there are just so many good fighters.

“As usual in this camp, I’ve had jibes from friends and other people calling me ‘fat’ and that’s funny. It’s no secret I put on weight between camps and sometimes I wonder whether it’s worth putting my body through hell or if I should just get a different job.

“Of course, it’s worth it when you’re in the ring and everyone is roaring for you. The highs are high and the lows are low. I’m inspired by all those who support me and particularly those who’ve supported me since day one. I don’t want to let them down.”

Also featuring on the show, which will be broadcast live on BoxNation, is Paddy Gallagher vs. Jay Byrne for the Celtic super-welterweight title, Steven Ward vs. Rolando Paredes, Marco McCullough vs. Ruddy Encarnacion plus Conrad Cummings, Nathaniel May, Sean McComb, Steven Donnelly, Gary Cully, Padraig McCrory and Sean McGlinchey.