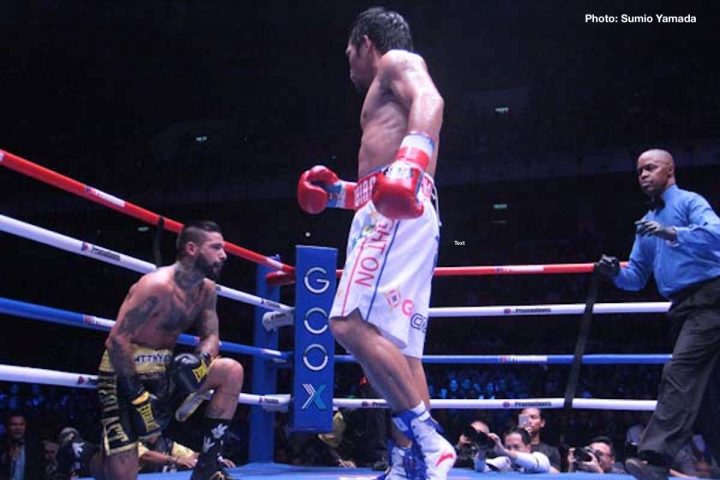 By Mike Smith: A fight between Manny Pacquiao and Adrien Broner is in the planning stages for January 19 on Fox PPV at the MGM Grand in Las Vegas, Nevada, according to Dan Rafael.

The fight organizers see it as a big enough fight to place it on pay-per-view despite both fighters being on the downside of their careers. Pacquiao’s days of being a PPV draw are well behind him at this point. Broner missed the boat completely, because he never was a PPV draw during his career. Asking the fans to pay to see Pacquiao and Broner on PPV might be viewed as punishment by the fans.

Placing Pacquiao vs. Broner on PPV is a gamble, because neither fighter are viewed by boxing fans as being PPV guys at this point in their careers. Broner has never been a PPV fighter, even though at one point he was considered by some fans as the future replacement for Floyd Mayweather Jr. as the next big PPV star in North America. Unfortunately for Broner, things haven’t worked out for him. He’s lost fights to Mikey Garcia, Marcos Maidana and Shawn Porter. He has a controversial draw against Jessie Vargas, as well as questionable wins over Paulie Malignaggi, Adrian Granados and Daniel Ponce De Leon. Those all could be defeats with the right judging.

Broner’s record could be 29-7 right now if you take away the numerous controversial decisions he’s been involved in during his career. As such, Broner could be a seen as a journeyman rather than a top 15 contender. Broner has been extremely lucky not to have a lot more losses on his record. The management for Pacquiao and Broner can put their fight on PPV, but it doesn’t mean that the boxing fans will bother ordering it if it’s too expensive. Fans want to get value for their money nowadays. With DAZN streaming great fights for just $9.99 per month and ESPN+ costing only $5 per month, it’s a crazy idea to put Pacquiao vs. Broner on PPV if it’s going to cost a lot for boxing fans to purchase the fight.

Pacquiao, 39, recently won the WBA ‘regular’ welterweight title last July in beating Lucas Matthysse by a 7th round knockout, but his win was over a secondary belt holder and not the true champion with the World Boxing Association.

This will be Pacquiao’s first defense of his WBA ‘regular’ 147 lb title. Pacquiao (60-7-2, 39 KOs) was interested in fighting a rematch against Floyd Mayweather Jr., but his management are instead putting him in with 29-year-old Broner (33-3-1, 24 KOs), who is currently going through a dry spell in his career in not having won a fight in two years since 2016.

Broner’s career is basically on life support at this time, and the only thing that he has going for him now is his ability to hype his fights with his verbal ability. They say the last thing to go for a fighter is his punching power, but in the case of Broner, it’s his trash talking ability. He’s lost everything else, but he can still talk.

For Pacquiao, it’s a huge plus that he can face another guy that he would be favored over, as he would likely be the underdog if he fought the talented welterweights like Errol Spence Jr., Terence Crawford, Keith ‘One Time’ Thurman, Danny Garcia and Shawn Porter.

Pacquiao hasn’t fought in the U.S since his 12 round decision win over former Top Rank fighter Jessie Vargas in 2016. Pacquiao lost his World Boxing Organization 147 lb title to Jeff Horn in 2017 in Brisbane, Australia. Pacquiao came back after a year long layoff to defeat Matthysse last July to win the WBA World welterweight title. The victory was a significant one for Pacquiao, as he was able to record his first knockout since his 12th round stoppage of Miguel Cotto in 2009. Pacquiao looked highly muscular and defined for the Matthysse.

Broner fought to a 12 round draw in his last fight against Jessie Vargas last April, and before that, he was beaten by lightweight Mikey Garcia by a 12 round unanimous decision in a fight at 140 in July 2017.

The reaction to the news of Broner vs. Pacquiao possibly ending up on PPV hasn’t been too well received by boxing fans on social media. The fans are not interested in paying to see Broner and Pacquiao fight at this point in their careers. This fight would have made sense back in 2011 or 2012, but not now. This is a new era in boxing with the streaming services taking over, and Pacquiao-Broner seems like an idea that is too late in the game for it to be successful.

If Fox ends up creating their own app and charging $5 to 9 per month for fans to watch boxing coverage, then it might not be a bad idea to have Pacquiao-Broner fight streamed, but it’s not a good idea to put the fight on PPV.

Just having Pacquiao-Broner on PPV for the heck it without their being a demand by boxing fans for the contest is a problem. Pacquiao lacks the personality to make up for his fading skills. He doesn’t have trainer Freddie Roach around any longer to help him trash talk to sell his fights. His trainer Buboy Fernandez can’t do what Roach did before in creating interest in his fights.

Many boxing fans have given up on Broner due to him having failed or looked bad in so may fights during his career. The fans didn’t give up on Broner after his loss to Maidana in 2012, but he’s clearly worn out his welcome since then in his losses to Porter and Mikey Garcia. As I mentioned already, Broner’s controversial fights against Malignaggi, Granados, Vargas and Ponce De Leon didn’t help his popularity. Pacquiao is thought to be on his way out of the sport by a lot of fans. The rematch that was talked about between Pacquiao and Floyd Mayweather Jr. was seen as a cash out for the Filipino to help him go out the door.

No matter what happens in the Pacquiao-Broner fight, Pacquiao is expected to hang around long enough to fight a rematch with Mayweather in 2019 or 2020. You can call it a money grab, as there are enough boxing fans out there that will still pay to see this tired rematch.