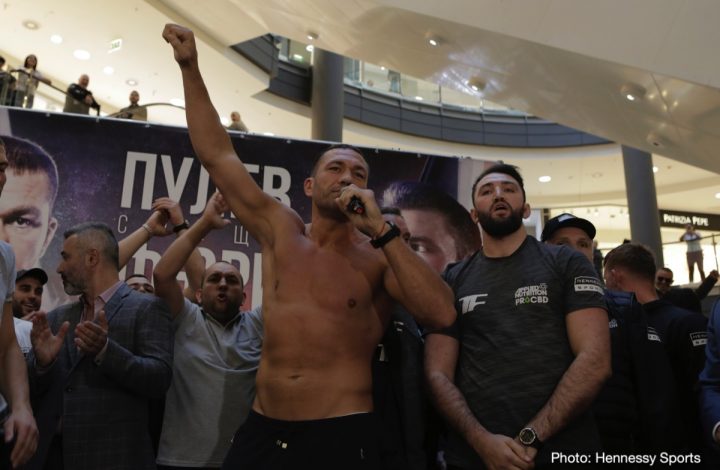 Pulev weighed in at 240 1/2 lbs at Friday’s weigh-in, which is the lowest weight for the talented Bulgarian in eight years since his fight against Isossa Mondo in February 2010. Pulev lost 15 3/4 lbs from his previous weight of 255 lbs last year against journeyman Kevin Johnson in April 2017. Pulev looks like he’s reversed his aging process and found the fountain of youth, as he looks 10 years younger. If you saw the way Pulev looked at Friday’s weigh-in, he looked like a young 27-year-old instead of a guy pushing 40 at 37-years-old. It’s as if the two fighters had traded places. Hughie, 23, looked soft around the middle, and much older than his chronological age. If one didn’t know the ages of the two heavyweights, they would think that Pulev was the younger fighter. Pulev clearly means business, and he’s come to the fight with the intent of getting a clear victory to move onto a world title shot against IBF heavyweight champion Anthony Joshua. The Joshua fight will make Pulev millions that he can use as a golden parachute for his retirement years. There’s huge money for Pulev to make fighting Joshua, and the only guy standing in his way is young Hughie. That sweet cash is there for Pulev to scoop up, but he’s got to make sure he defeats Hughie tonight to get that big payday.

There’s a huge disparity in experience and age between the two combatants. Hughie, 23, is a guy that has been given the express trip to the top without having beaten anyone of note. Some boxing fans believe the only reason the sanctioning bodies have the 6’6” Hughie ranked so highly is because he’s the nephew of former unified heavyweight champion Tyson Fury.

What we do know is Hughie looked dreadful when he stepped it up for the first and only time in his five-year pro career last September against former World Boxing Organization heavyweight champion Joseph Parker by a one-sided 12 round majority decision. The effort from Fury was minimal. He just looked like the moment was too big for him, and he wasn’t interested in trying to win the fight.

It was more of a survival oriented fight for the young Hughie. It was strange how satisfied Hughie looked after the fight despite having run and held the entire 12 rounds. I guess you could say it was a moral victory for Hughie to be able to go 12 rounds against a world class fighter. Unfortunately for Hughie, the judges weren’t impressed with his nonstop spoiling and survival oriented tactics. Two of the judges gave it to the 26-year-old Parker by a pair of of 118-110 scores.

What’s going to make it hard for Hughie to win tonight is his lack of punching power. Hughie just hasn’t been able to improve his punching power since he turned pro, and that’s going to be a limiting factor for him to be able to go anywhere in the division.

Hughie’s trainer/father Peter Fury believes he’s become a puncher due to his recent 5th round knockout win over British heavyweight champion Sam Sexton last May. What Peter doesn’t say is Sexton is an old 34, and he’s already been knocked out quicker by David Price in a 4th round KO in 2012. The guys Sexton had been fighting since then have been domestic level opposition, and not world class fighters. As such, it’s not a big deal that Fury was able to KO a guy like Sexton. Heck, it would have been a major disappointment if he couldn’t knock the guy out. The win proved that Hughie is at least a level above Sexton, but not necessarily a world class fighter. I mean, the way that Parker dominated Hughie suggests that he doesn’t belong at that level.

“He’s improved power-wise and his all-round game as well,” Peter said about Hughie. “He’s attacking a lot more than he used to do because he knows he can’t leave it to the judges.”

We’re going to see tonight if Hughie has improved his power game from what we saw last year in his fight against Parker. What we saw in Fury’s fight against Sexton was a fighter that didn’t look like he’d progressed to any great extent in the power game from his previous performance against Parker. The main difference in that fight was Hughie was fighting a guy that was easy prey in Sexton. That wasn’t a good enough opponent to tell us anything about whether Hughie has raised his game or not since the loss to Parker. Pulev, 37, has the kind of talent that will be a good measuring stick for Hughie’s progress in the heavyweight division. If Hughie can defeat Pulev and look good in doing so, then you can say for certain that he’s improved since his only fight against a talented opponent during his career. But it’s not enough for Peter to rave about how great Hughie is. Hughie has got to prove that he can exist with the world class fighters, on the grounds that he looked so incredibly bad in his loss to Parker last year.

“He knows it’s not just a simple case of just slipping and sliding and out-boxing his opponent,” Peter said about Hughie. “He knows he’s got to do more than that and be please the crowd as well. He’s come on a lot.”

What Peter should be saying is it’s not enough for Hughie to spoil for 12 rounds and just look to survive. Hughie needs to actually try and win the fights when he faces good opposition instead of trying to go the distance and hope to win a controversial decision. Hughie didn’t out-box Parker. It’s unclear who Peter is referring to when he speaks of it not being enough for Hughie to slip and slide and out-box his opponents. The guys that Hughie has been dominating since he turned pro have been journeymen and domestic level fighters. He’s only fought one good fighter in Joseph Parker, and he lost to him by a one-sided 12 round decision. At no time in that fight did Hughie “out-box” Parker.

“He’s hitting very hard now as well. His punch power has gone up. He’s maturing now – he’s still very young at 24. You can tell how much he’s developed over the last 12 months,” Peter said in talking up Hughie’s development of power.

Although Peter Fury has been banging on about how improved young Hughie is, I don’t think he has improved significantly enough for him to get the ‘W’ against a talent like the 6’4 1/2″ Pulev, who is in the best shape in many years. Pulev’s expert jab and powerful clubbing right hand will be too much for Hughie in this fight. I see a fight that will be dominated by Pulev from start to finish. I see Pulev winning a lopsided 12 round decision. Hughie will make it the full distance because he’ll likely hold and run like he did against Parker in order to survive the distance. The crowd will be cheering every punch Pulev throws in the fight, and it’s going to be tough for the 6’6″ Hughie to deal with that. Hughie is accustomed to be cheered by his boxing fans in his fights in Manchester. In the one fight in which the fans were cheering Hughie’s opponent in Fred Kassi, we saw him apart mentally in the 7th round. Hughie rammed his face into the crowd of Kassi’s head, causing a deep cut over Hughie’s left eye. It looked to some like Hughie quit mentally and that his head-ramming was a way for him to get out of the fight. The fight was stopped in the same round that the cut occurred. I think it’s quite possible that the pro-Pulev crowd will be too much for Hughie to handle, and he’ll end up under-performing. As good as Pulev looks, he’s going to be a major problem for Hughie no matter how motivated he is for the fight.