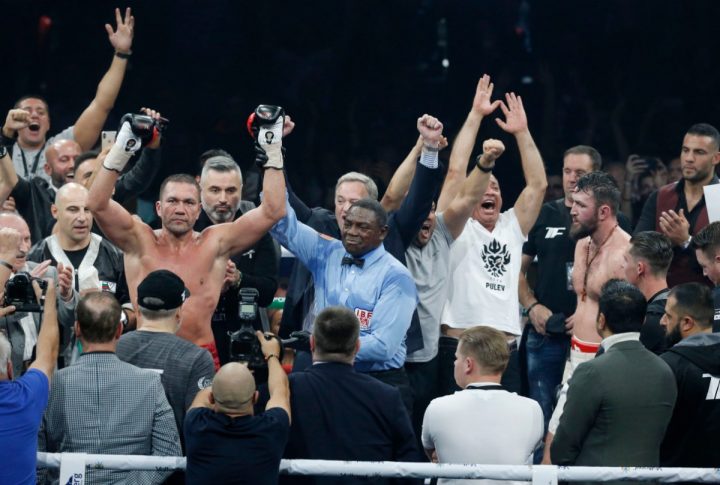 By Allan Fox: Kubrat Pulev (26-1, 13 KOs) defeated Hughie Fury (21-2, 11 KOs) by a 12 round unanimous decision on Saturday night to punch his ticket as the mandatory challenger for IBF heavyweight champion Anthony Joshua.

Pulev, 37, won’t get his shot against Joshua yet. He’s got to wait for Joshua, his promoter Eddie Hearn and the WBO to decide on his next fight. The World Boxing Organization might order Joshua to defend against his WBO mandatory once the sanctioning body makes a decision who that fighter will be. Whyte is rated #1 with the WBO, and Bryant Jennings #2. Whyte has a fight on December 22, possibly against Dereck Chisora.

Pulev did a great job of beating Fury, 23, by a 12 round decision on Saurday night at the Arena Armeec, in Sofia, Bulgaria. The scores were 117-111, 118-110 and 115-113. Hughie made it competitive, but he couldn’t overcome a cut that opened up in the 2nd round. Hughie had suffered the cut over his left eye during training camp, and Pulev took advantage of it by opening it up again. With the cut bleeding bad, it forced Hughie to fight more aggressively than he wanted to because he wasn’t certain whether the fight would be stopped.

“Hughie came into the fight with a cut above the eye,” Peter said. “He was stitched up two weeks ago but they [the doctors] said it would heal in time for the fight and obviously it didn’t.”

Since Joshua’s promoter Eddie Hearn has shown a lot of interest in matching him against Whyte, it puts Pulev at the end of the line. He’s going to have to wait. Once the WBO makes it clear that Whyte is their mandatory, then that’ll give him any excuse that he needs to setup a fight between them over Pulev.

The boxing fans want to see Joshua fight WBC champion Deontay Wilder, but it doesn’t look like Hearn is ready to make that fight yet. Whyte and Pulev are lesser fights than Joshua-Wilder, but Hearn appears to be more willing to make Joshua-Whyte for April 13. If it were up to the boxing public, Wilder would be facing Joshua in April, but Hearn is the boss and he clearly wants Whyte as the guy that faces AJ.

“Pulev caught him with a jab and split it right open. From that moment in the second round it was an uphill battle,” Peter Fury said. “I’m proud of my son – he was fighting on away soil, injured, yet he still went the full distance.”