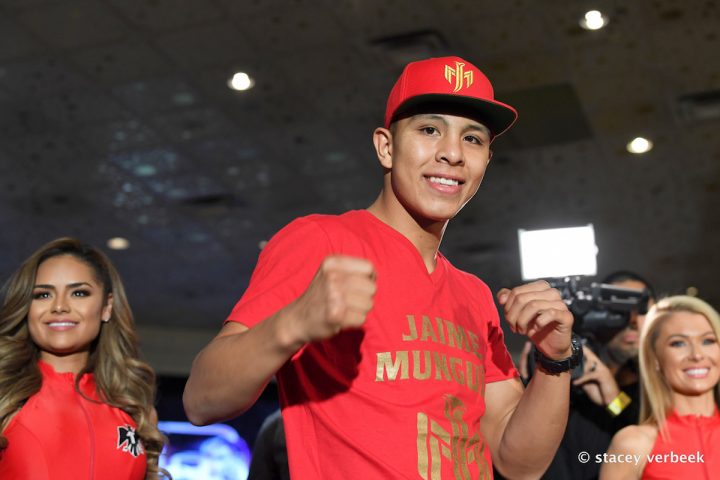 WBO Junior Middleweight World Champion Jaime Munguia will be the special VIP guest for the Oct. 18 edition of Golden Boy Boxing on ESPN at Fantasy Springs Resort Casino in Indio, Calif. The event will be headlined by the 10-round middleweight fight between Donegal, Ireland’s Jason Quigley (14-0, 11 KOs) and Freddy “El Riel” Hernandez (34-9, 22 KOs) of Mexico City, Mexico for Quigley’s NABF title.ESPN2 and ESPN Deportes will air the fights beginning at 10:00 p.m. ET/7:00 p.m. PT, and stream live on ESPN3 starting at 8:30 p.m. ET/5:30 p.m. PT.

Munguia is a 22-year-old puncher who has ended 26 of his fights by stunning knockout. The native of Tijuana, Mexico rose to fame in the world of boxing by stopping Sadam “World Kid” Ali to capture the WBO Junior Middleweight Title. Munguia has defended his title two times, against Liam “Beefy” Smith and Brandon “Bad Boy” Cook, in what has been an exciting year for the young star. Munguia will be in attendance for this event to meet fans, sign autographs and take pictures inside the Fantasy Springs Special Events Center. The meet-and-greet is open to the public with the purchase of a ticket to the event.

In the co-main event Eddie “E-Boy” Gomez (21-3, 12 KOs) of the Bronx, N.Y. will face Amagasaki, Japan’s Shoki “El PV” Sakai (23-8-2, 13 KOs) in an eight-round welterweight bout. Gomez, who has Honduran roots, will return to Fantasy Springs after scoring a knockout victory against fellow Golden Boy Promotions stablemate Keandre Gibson earlier this year in that same arena.

Los Angeles fan-favorite Christian “Chimpa” Gonzalez (19-2, 15 KOs) of Buena Park, Calif. will face a former foe in a scheduled eight-round lightweight rematch against Sindangan, Philippines’s Rey “The Flash” Perez (23-10, 7 KOs). Perez had given Gonzalez his first ever unanimous decision loss, which Gonzalez will be out to avenge when the two meet in the ring again.

Quigley vs. Hernandez is a 10-round fight for the NABF Middleweight Title presented by Golden Boy Promotions. The event is sponsored by Tecate, “THE OFFICIAL BEER OF BOXING” and Hennessy, “Never Stop, Never Settle.” The fights will take place on Thursday, Oct. 18, 2018 at Fantasy Springs Resort Casino. ESPN2 and ESPN Deportes will air the fights beginning at 10:00 p.m. ET/7:00 p.m. PT, and stream live on ESPN3 starting at 8:30 p.m. ET/5:30 p.m. PT.

Michael Conlan focused on revenge on Russian Nikitin – not Shakur »