Hearn to announce Kell Brook’s next opponent this week for Dec.8 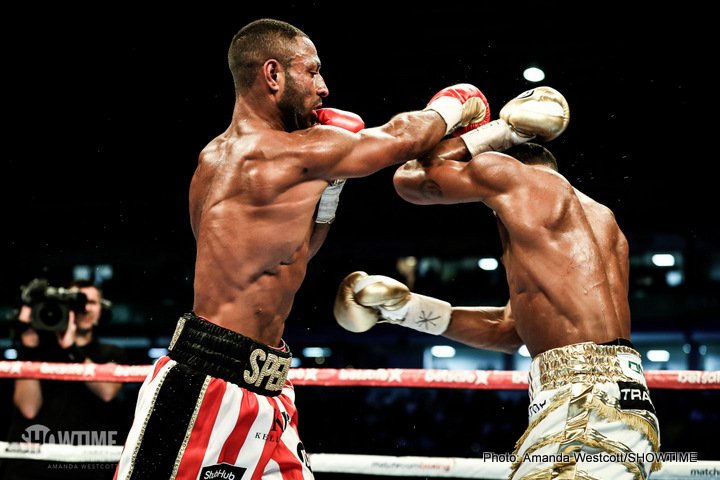 By Scott Gilfoid: Eddie Hearn plans on making an announcement later this week about former IBF welterweight champion Kell Brook’s next opponent for December 8 in Sheffield, England. This will be Brook’s tune-up to get him ready for his long-awaited fight against Amir Khan (33-4, 20 KOs) for February or March of 2019, according to Hearn.

Hearn will likely drag in a body for Brook to smash in front of his loyal boxing fans on the night on December 8. Afterwards, Brook start calling out Amir Khan straightaway, and making a big scene. It’s all so predictable. It’s too bad Brook can’t show some courage and take on one of the talents in the 154 lb division like Jermell Charlo, Jarrett Hurd, Erislandy Lara or Jaime Munguia. Is that too much to ask for Brook to fight a good opponent in order to build up his fight against Khan in the proper way? I’m just saying. If Brook wants to make his fight with Khan into a blockbuster, then he needs a real scalp on December 8 against a good opponent instead of another record-padding fight.

Hearn isn’t dropping any hints about who the opponent will be for Brook on December 8, but it’s thought to be another lower level guy from the 154 lb weight division. Hearn isn’t even going through the motions to try and say Brook’s next opponent will be an upgrade from his last fight against Sergiy Rabchenko, who he stopped in the 2nd round last March. We’re probably talking about a journeyman level guys. However, it’s got to be someone recognizable to at least the hardcore boxing fans, because Brook will be headlining his December 8 card. His fans will be up in arms if he takes on another fodder opponent like the last time he fought.

“It looks like Brook is going to go December 8, and then hopefully, we can get the Khan fight made February or March,” Hearn said to Thaboxingvoice. “Brook will headline in Sheffield [on December 8]. We’re going to be announcing his opponent later this week,” Hearn said.

I wouldn’t assume that the Khan-Brook fight is going to get made if I was Hearn. Khan has already said what Brook needs to do for him to get a fight against him in 2018 by demanding that he agree to face him at 147 and with a 10-pound rehydration clause to keep his weight at no higher than 157 lbs on the morning of the fight. Brook is resistant to that idea unfortunately, so it doesn’t look to me like the fight is going to get made. Brook wants the Khan money though. Brook might as well tell Khan, ‘Yes sir, I’ll agree to the 10 lb weight class absolutely.’ That’s the only way the Khan vs. Brook fight is going to get made. It would be better for Brook to agree to the rehydration clause sooner rather than later, because if he waits too long, he’s going to wind up losing it. Khan will move on and face someone else.

Hearn is still acting stubborn about WBC heavyweight champion Deontay Wilder wanting a 50-50 split for a unification fight against IBF/WBA/WBO heavyweight champion Anthony Joshua. However, if you look hard at the face of Hearn, he seems to know that he needs to give Deontay everything he’s asking for in order to make the fight happen. Right now, Hearn is still in the denial stage of griping about it. Instead of Hearn stomping his feet and holding his breath, thinking he’ll eventually get his way, he needs to realize that the only way that he’s going to get Wilder to sign for a fight against Joshua is if he gives him parity. As such, Hearn can agree to give Wilder the money now or simply give up on the idea of making the fight forever and go his own way. The you can argue that the mature way to deal with the negotiations would be for Hearn to give Wilder the 50% purse that he’s asking for so the fight with Joshua gets made. The immature way to negotiate the Joshua-Wilder would be for Hearn to continue to complain about Wilder not deserving the 50-50 split, hoping that if he says it long enough, the boxing public will agree with him, and this will result in Deontay caving in and agreeing to the 85-15 split that he’s been offering him.

“There’s not even a person in this world that thinks Deontay Wilder deserves a 50-50 split, not from his manager/adviser, and probably not even his fans,” a stubborn sounding Hearn said to Thaboxingvoice.

I hate to be the one to break this to Hearn, but the boxing public has no problem with Wilder getting a 50-50 deal with Joshua. The fans just want to see the fight period. They don’t care that Wilder is asking for 50 percent of the loot for the fight. You have to ask Hearn a question. Will Joshua get the same kind of money fighting anyone else that he would get in taking 50 percent of the purse for a fight against Wilder? I think the answer would be NO.

“Do your thing and let’s see what happens in the fight,” Hearn said about Wilder’s December 1 title defense against former heavyweight world champion Tyson Fury . “We don’t have to do a deal now, but we do have to do some progress. What he’s [Deontay] saying now [about wanting a 50-50 purse split], we shouldn’t even bother having a chat. He’s negotiating at much lower point than his comments suggest. I don’t know if it’s bravado. All we want to do is talk about the fight,” Hearn said.

Hearn is so anxious about wanting Wilder to start negotiating a deal for the April 13 fight against Joshua BEFORE he faces Tyson Fury on December 1. Now why would Hearn be so insistent that Wilder negotiate the fight with Joshua before the Wilder-Fury fight rather than after? I think the answer is a simple one. Hearn likely wants the discounted rate for Wilder, because once he knocks Fury out, his popularity is going to shoot into the next galaxy. We’re talking stardom for Wilder after he stretches out the 6’9″ Fury on December 1, which is why it’s in Hearn’s best interest to try and put together a deal for the Joshua-Wilder fight before December 1st rather than afterwards. It makes a world of difference with the negotiations in getting Wilder to agree to the terms before he faces Fury. Since Wilder and his management weren’t born yesterday, they’ve been resistant to what the wily Hearn. They want to wait until after the Fury fight before they start negotiating with Hearn for the Joshua fight. Of course, Hearn could speed up the process if he simply gave Wilder the 50-50 deal he’s asking for right now, but it doesn’t look like he wants to do that.

“I don’t think anybody wants to fight Povetkin, especially not Deontay Wilder, who did everything he could with the drug situation [of Povetkin testing positive for a banned substance] to not fight him. Just like Deontay Wilder avoiding Wladimir Klitschko. He didn’t want to fight him either. This is the pattern we’re following where he calls guys out but doesn’t fight them. You shouldn’t doubt me wanting the fight [with Wilder]. I want to see Joshua become the undisputed heavyweight world champion,” Hearn said.