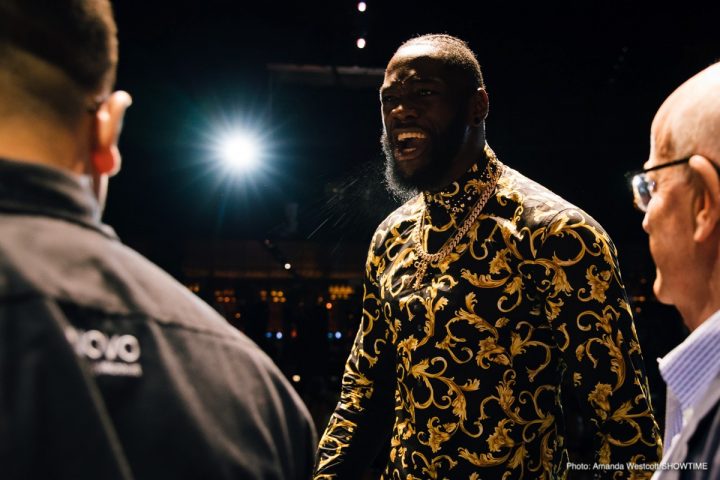 By Scott Gilfoid: Deontay Wilder has been given a “much improved” offer by British promoter Eddie Hearn to face his marquee money fighter Anthony Joshua in a unification fight on April 13. However, Wilder’s manager Shelly Finkel, who Hearn likes to call, “Shirley”, isn’t interested in meeting with his father Barry Hearn until after Wilder’s title defense against Tyson Fury on December 1.

Hearn is highly upset that Finkel won’t agree to meet with Barry to start the negotiations for the April 13 fight, because he says that if he waits until after the Wilder-Fury fight on December 1, it’ll be too late.

Hearn isn’t saying how much improved the offer was for Wilder. The previous offer for Wilder amounted to an 85-15 to 80-20 split in Joshua’s favor for a fight that could pull in from $75 million to $100 million. Wilder wants a 50-50 deal, which would be anywhere from $37 million to $50 million.

The new and improved offer from Hearn for Wilder is a percentage deal, not a flat fee like he’d been offering him. Hearn previously stated that Wilder didn’t rate a percentage deal because he doesn’t bring in the same amount of money for his fights as Joshua. As such, Hearn offered Wilder a flat fee of $15 million, and this offer failed to get him to sign. Wilder supposedly agreed to it, but then didn’t sign. Instead of seeing that as a sign that Wilder had changed his mind, Hearn continued to give him the same $15 million offer that had failed to get him to sign. Predictably, the fight didn’t get made, and Hearn ended up matching Joshua against Alexander Povetkin instead on September 22. Some boxing fans feel that Hearn intentionally sabotaged the negotiations so that he wouldn’t make the fight and risk having his gravy train fighter Joshua beaten.

“We went back and made a much-improved offer from the first one – this one with a percentage split – a very attractive offer and then requested a meeting, but they turned round and said ‘no, we won’t meet you,'” Hearn said to skysports.com.

Wilder’s manager telling Hearn that he won’t meet with his father Barry has to mean that the offer he gave him wasn’t high enough for him to accept it.

Hearn doesn’t understand why Wilder’s management won’t meet with them. Hearn doesn’t believe that a fight of the magnitude of the Wilder vs. Joshua fight can get made over the phone or the internet. Hearn doesn’t say what would be different if Finkel met with Barry in person. It seems that meeting with one another wouldn’t change anything. What’s important is that Hearn and Joshua are offering Wilder a fair deal. If they feel that it’s not a fair deal, then it doesn’t matter if Finkel meets with Hearn or not. The same likely low ball offer that Hearn is saying is “much improve” will still be viewed as a low ball offer if Finkel is seeing him in person.

“We wrote to them after our fight with (Alexander) Povetkin and said we need to make our move soon because of mandatories in place for April 13, so could we have a meeting? They got back and said, ‘No, we’re not interested,'” Hearn said.

Hearn needs to see it from Wilder and Finkel’s perspective. If Hearn is offering a tiny percentage of what they feel they’re worth, then obviously they’re not going to meet with him or his father. It would obviously help if Hearn stopped referring to Finkel as “Shirley.” Being respectful of Finkel would be a good start. When you have another promoter mangling your name on purpose is a sure fire way of fowling up the negotiations right out of the block. 30 years from now when Eddie Hearn is wiser and more mature, he’ll look back at this an probably ask himself, ‘Why did I call Shelly Finkel, ‘Shirley?’ Even with all the teasing, Hearn could make the fight with Wilder if he gave the guy the purse split that he’s asking for. Giving Deontay a 75-25 or 70-30 split won’t do it. Once Wilder beats Tyson Fury on December 1, he’s going to be able to ask for a 50-50 split for a Joshua fight and expect to get it.

“We made an offer, a revised offer, and they said, ‘No,'” Hearn said to IFL TV. “What more do you want us to do? We made an offer, and we didn’t hear back. I feel like this whole thing was to raise Wilder’s profile and to fight Fury. I have to say they’ve done a great job, because the whole Fury-Wilder fight is a fight built off Joshua’s name,” Hearn said.

Gosh, Hearn sounds completely deluded. If he really thinks Wilder is dragging his feet in the negotiations for the Joshua fight in order to raise his profile, he’s out of touch with reality. The reason why Wilder’s management isn’t accepting the offers given to them from Hearn is they’re far below what the fight is going to bring in. I mean, if Wilder-Joshua brings in $100 million, then a $15 million flat fee is pitiful. It’s a great deal for Joshua but a horrid one for Deontay. They would have to be insane to accept such a paltry flat fee for a fight that is going to bring in big bank.

Hearn sounds like someone who is looking for excuses not to make the Wilder-Joshua fight. It’s so sad. Hearn looking for any excuse not to make the fight to keep the gravy train going. The reason the boxing fans don’t think Joshua wants the fight with Wilder is the $50 million offer he turned down. Does that sound like someone that wants to fight Wilder? Hearn and Joshua sound like guys that absolutely don’t want to face Wilder.