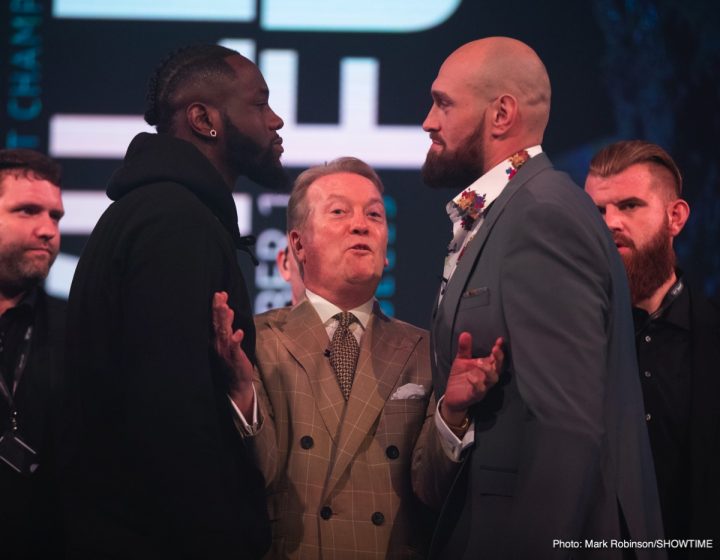 By Scott Gilfoid: Deontay Wilder briefly lost his cool during Monday’s kickoff press conference in London after being challenged to have “a little spar” by former heavyweight champion Tyson Fury.

The big 6’9″ Fury got in Wilder’s face, causing him to give the British fighter a hard shove that sent him flying backwards several feet. At that point the team for both fighters moved in and made sure neither guy could get close to each other again. Wilder looked like he was ready to plant Fury onto the floor for the 10 count at one point near the end of the news conference. It’s a good thing that the two teams separated the two fighters when they did, because Wilder was on cruise control and in a reactionary mode where his mind couldn’t stop his body from what it was about to do to Fury. It was purely a self defense mechanism on Wilder’s part after Fury got in his face. It’s not like Wilder wanted to lay out the 6’9″ Fury for the fun of it. Wilder was reacting to a threat that suddenly appeared when Fury got on his face.

Fury (27-0, 19 KOs) looked pretty shaken up by the shove, as his confidence seemed to be gone, and you could see fear in his face. Wilder (40-0, 39 KOs) looked like he wasn’t playing around one bit and wanted to lay the big 250 pound Fury out pretty on the floor if given the chance to get near him again. The press conference started out with Wilder and Fury seemingly friendly with one another, but that all changed when Tyson stood up and challenged Deontay to spar with him. That ended the friendliness of the press conference unfortunately.

Fury was doing a lot of trash talking in using slang and jargon from his side of the world, but I’m not sure that Wilder understood what he was saying. Fury was frequently calling Wilder a “dosser” and saying he doesn’t have “the bottle.’ Fury would have been more understandable if he chose not to use slang when trash talking Wilder, because he’s an American and likely doesn’t understand the slang that he was using. 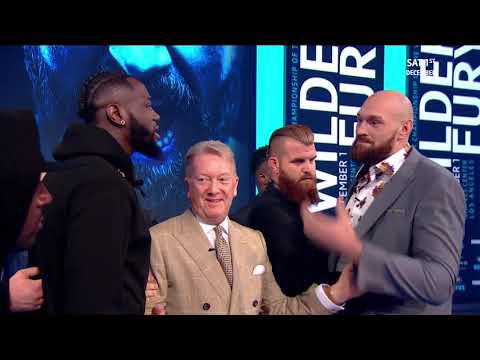 Here’s some of the highlights from Monday’s press conference:

It’s a good thing that the teams were between the two fighters, because Wilder looked like he wanted to land one of his right hands on Fury’s chin. Wilder seemed to calm down after awhile, realizing what was at stake if he were to flatten Fury. Towards the end of the press conference, Wilder sounded like he was trying to reason with an unruly child. Wilder sounded like a principal of a school talking to a troubled youth. It was riveting to watch. One wrong move by Fury and he would have been on the ground taking a long snooze. I mean, Wilder is the wrong dude for any fighter to walk up on like the way Fury did.

Fury: “I want to feel the power. Plant one on my chin. You’re an American dosser. ‘Bombs squad!’ I want to feel the power. Put one right here, you s–t house. It would bounce off and break your hand, you big bum. You think it’s a game. I’m not joking. I’m going to punch your face in. There’s no play here. I don’t play, especially with bums like you. You’ve got power. Let me feel your power, boy. You’re a big bum. Hell has no fury like Tyson Fury. You’ve got no bottle. I stand right in front of you and say let’s have spar, you big dosser. Let’s have it now. Let’s do it you big dosser. Please, let’s have a spar. Let’s give the fans a warm up for what they want. Come on, let’s have a spar. I spar all the time. I want to feel your power.” 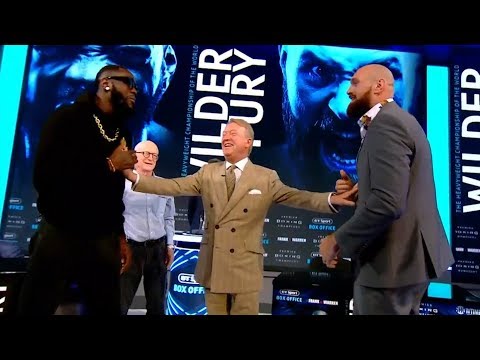 Fury did most of the talking and hardly let Wilder get a word in edgewise once the two fighters were on their feet. The moderator implored Fury and get his emotions under control, but it was no use. He was like a runaway gun, rattling on about this and that and repeating himself with his challenges of Wilder to spar with him. It was never going to happen with the teams standing in front of the two, and yet Fury continued to egg Wilder on like a matador waving a red cape in front of an angry bull.

Wilder made it clear that he wants to knock Fury out cold on December 1 in their fight on Showtime PPV at the Staples Center in Los Angeles, California. It’s going to take a great chin for Fury to be able to take the kind of punishment that Wilder is going to be dishing out. Fury is coming into this fight with very little power and not much in the way activity against talented heavyweights during his career. This looks bad for Fury. Anyway you want to twist it, Fury looks like he’s really up against it on December 1 and no amount of mental mind games is going to help him get the ‘W’ in this fight Fury was able to psych out Wladimir Klitschko three years ago with his verbal abuse, but it doesn’t look like it’s going to work with Wilder. He’s not afraid to let his hands go unlike Wladimir, who had no business being inside the ring with Fury on the night. Wladimir was tied in knots mentally. In what should have been an easy fight for Wladimir turned out to be his worst nightmare because he wouldn’t throw punches. Wilder isn’t going to make the same mistake.

“No 15 stone (210lb) man on the planet can beat Tyson Fury. I will stand and prove what I will do to this idiot. I will punch his face right in,” Fury said.

Well, Fury has been knocked down by a 210 pound fighter in the past in Steve Cunningham. If he was able to knock Fury down, you’ve got to bet that Wilder will be able to do the same thing if he lands one of his right hand bombs on his shaky chin. 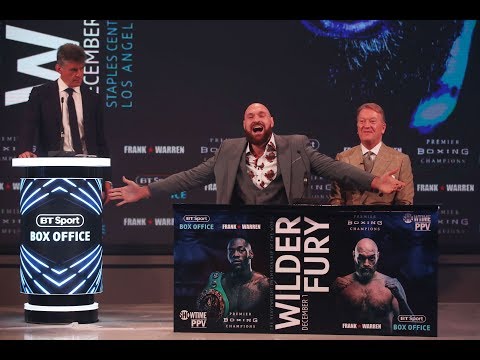 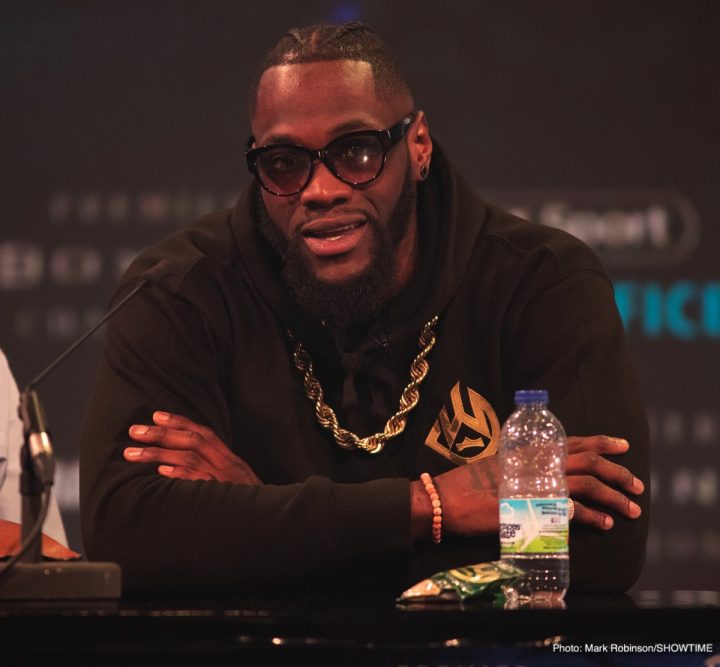 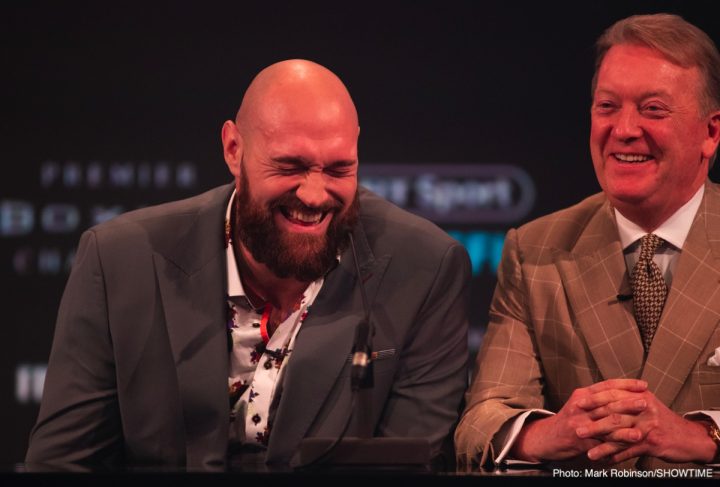 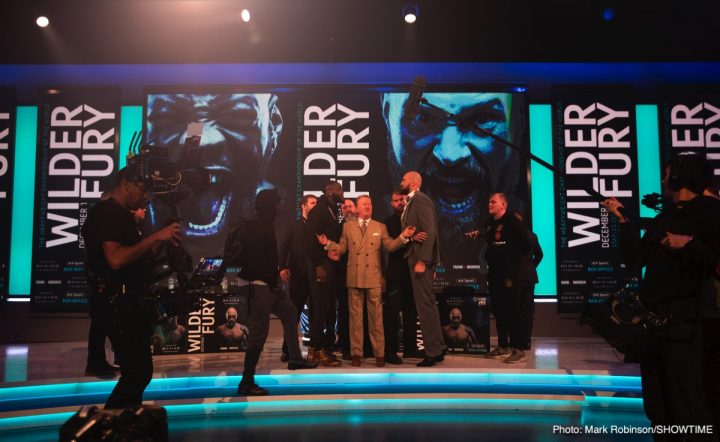 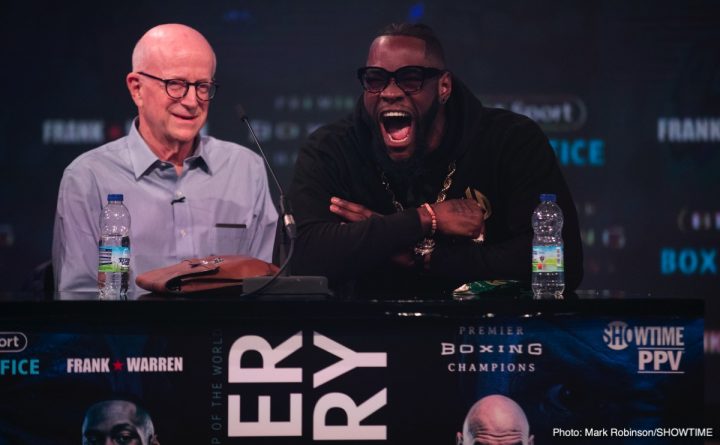 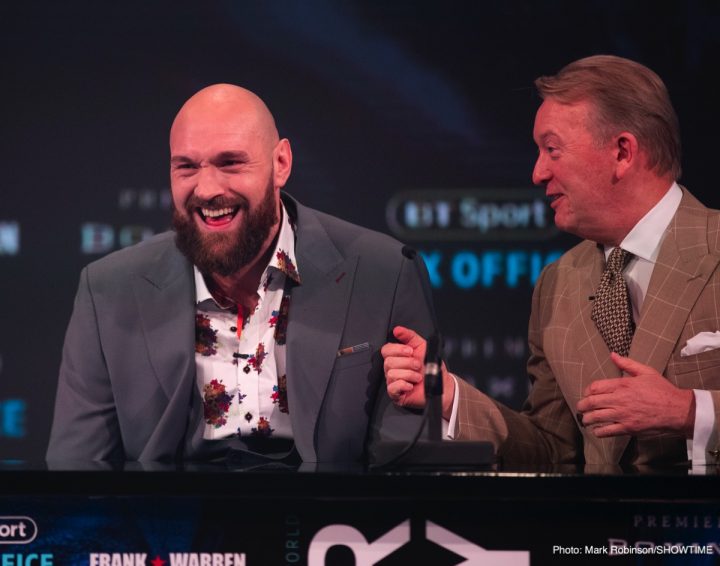 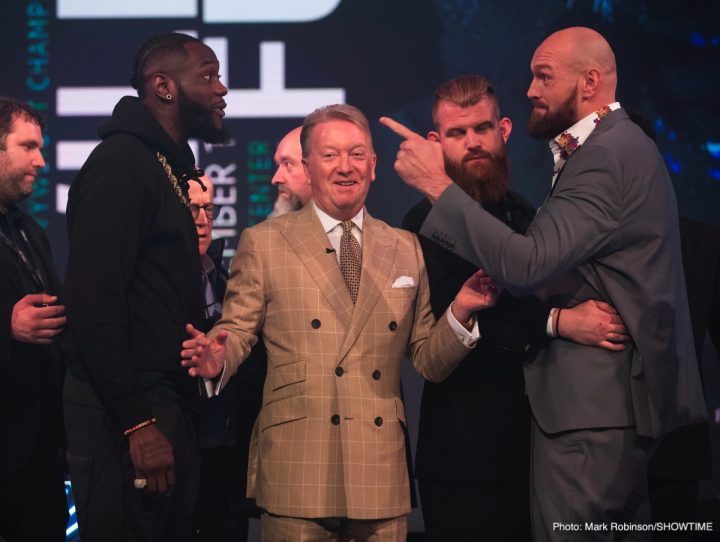 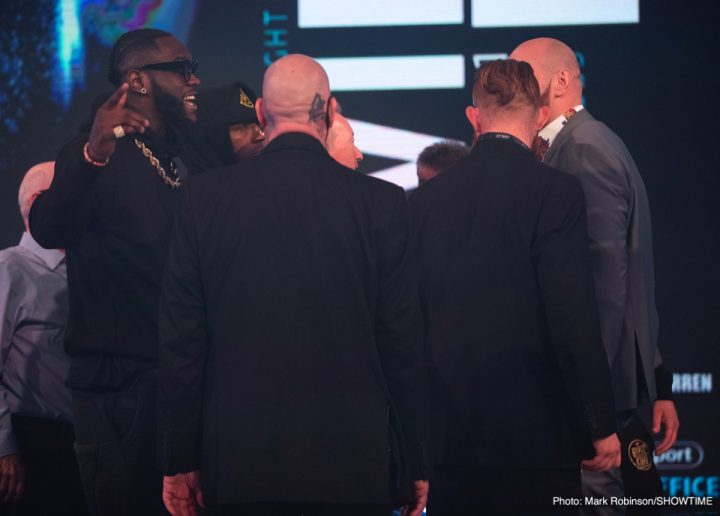 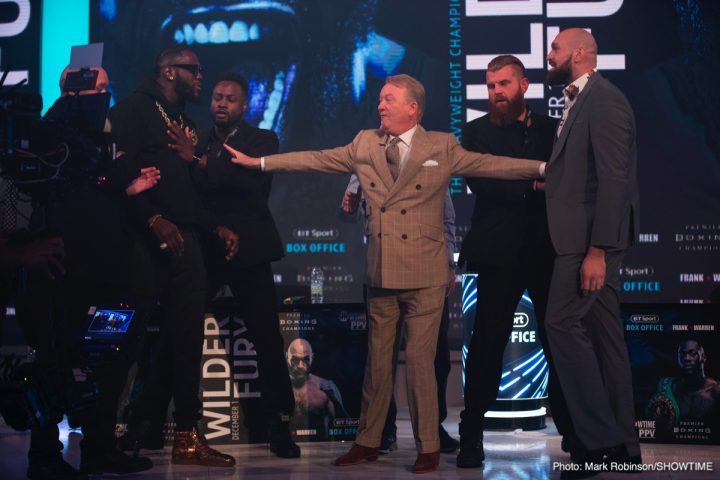 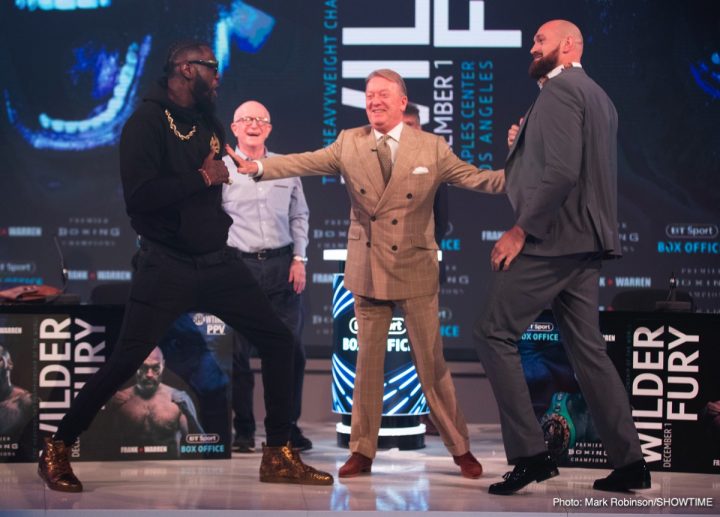 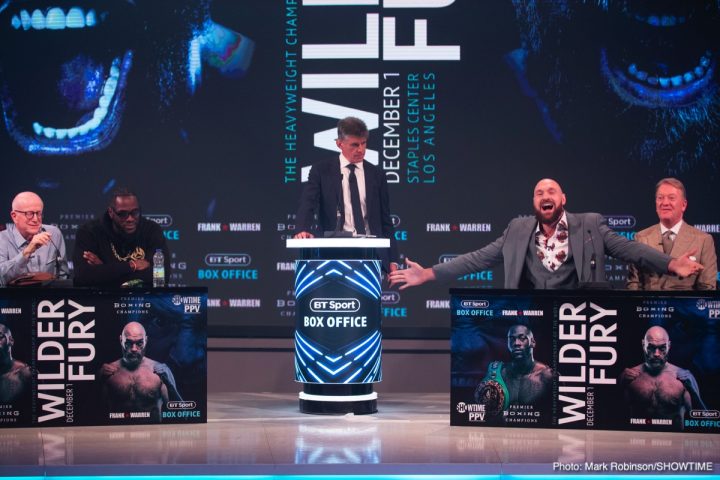 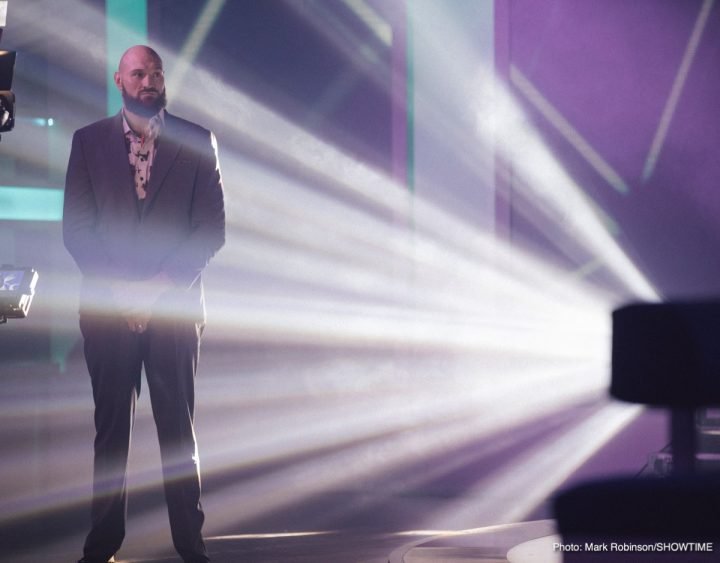 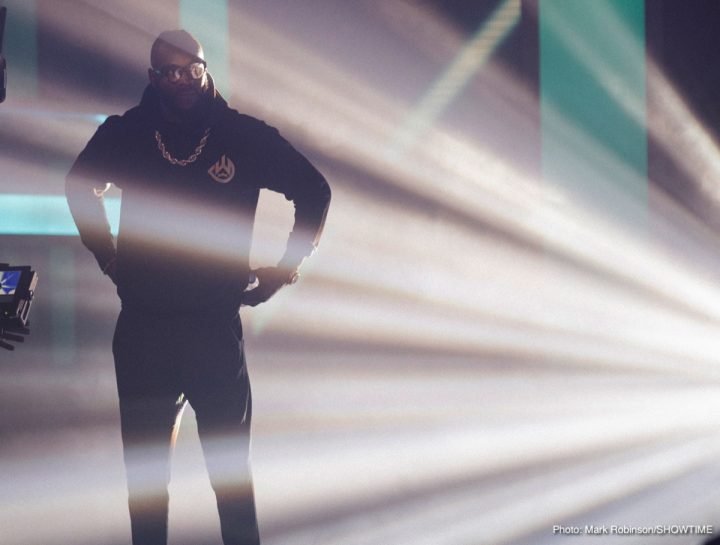 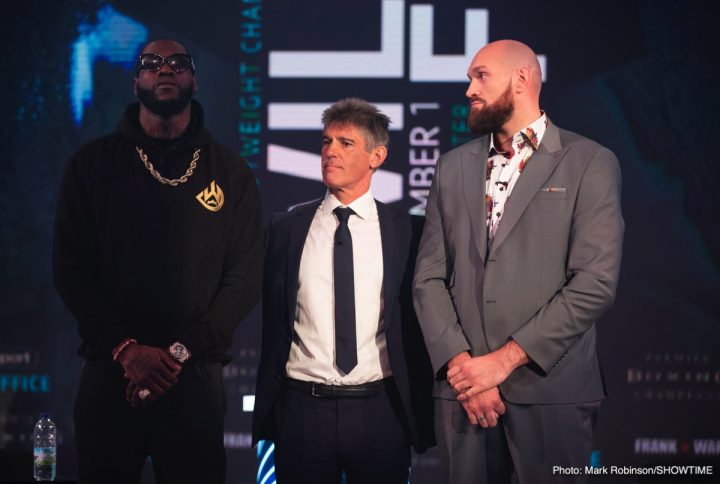 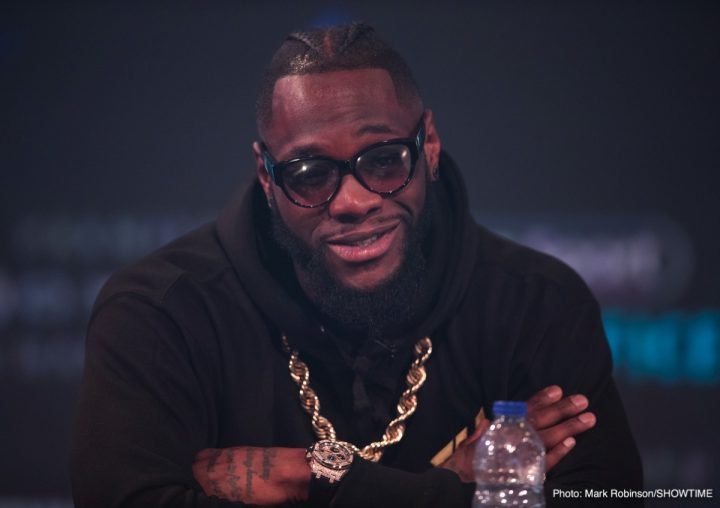 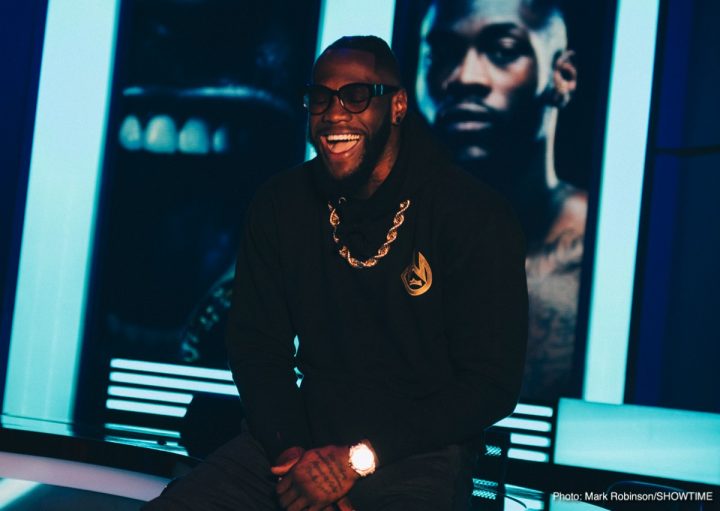 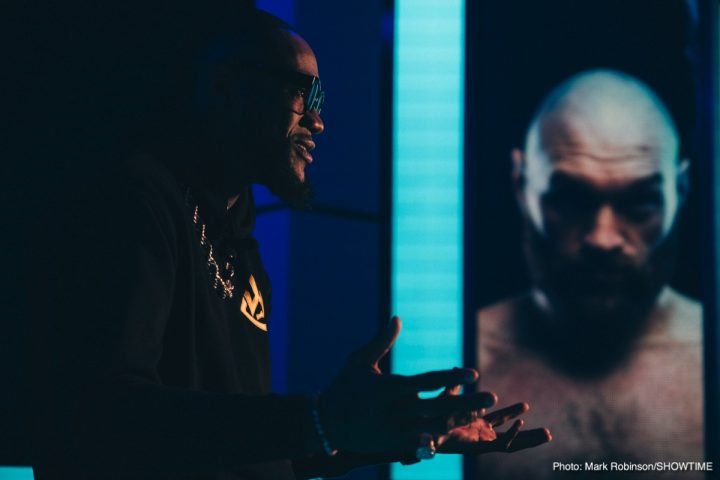