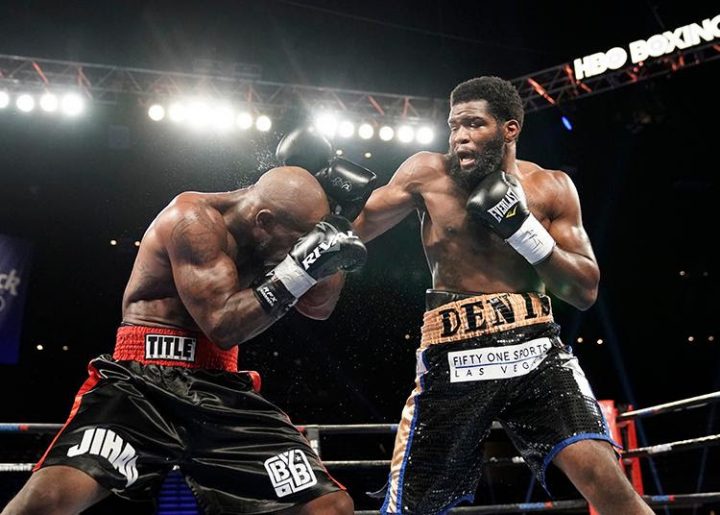 Veteran super middleweight Denis Douglin is now approaching his career with new enthusiasm following a solid decision victory in August over the previously undefeated Vaughn Alexander. Douglin (21-6, 13 KOs) is newly signed with Main Events, with a bout scheduled on November 3 at The Aviator in his hometown of Brookyn, New York.

Douglin says he’s approaching every fight now as “do or die,” and won’t tolerate a single loss. “I’m confident the way I’m training. I’ve been written off by a lot of people. I have a daughter (Ariah, age one and a half). I need to make sure she’s fine. I’m dedicating everything to this last run,” said Douglin, starting with his November 3 matchup.

“My daughter made me relook at boxing as my way to make sure her life is the way it should be,” said Douglin. Ariah goes with her daddy to the gym every day. “She’s starting now to get the concept, she mimics me. She hits the bag, she does sit ups.”

But Douglin still finds the joy in his work. “I go into the ring and have fun,” said Douglin. “When I have fun and I’m in shape, I’m going to win. A lot of my losses came from me not taking things seriously … Nobody has beaten a 100 percent ‘Momma’s Boy.’ I feel the hunger.”

Douglin says he’s thrilled to be working with Main Events. “I fought my third professional fight on a Main Events card,” recalls Douglin. “I’ve always had a good relationship with Kathy (Duva) and Jolene (Mizzone). I have nothing but respect for hard working women. My mom is one of the hardest working women I know.

“Women in boxing have tenacity, intensity, especially in a male dominated sport. They go the extra mile because they have something to prove,” said Douglin.

Douglin is trained by his mother Saphya Douglin, herself a former boxer. “My mom made me work harder than everyone else … Women go a lot harder than men and get half the recognition,” said Douglin.

While Douglin’s father took a back seat to his training in the ring, he showed him how to be a good man outside the ring. “I learned so much from my dad. He showed me you can be a manly man and still take on a lot of the ‘women’s jobs,” said Douglin, as his father ran the household while his mother took him to the gym. “That showed me so much in a man.”

Douglin is especially enthusiastic about the opportunity to fight on a live streaming platform like Facebook Watch. “I love it. I love this is the way the world is going now … We’re going to make some noise.”