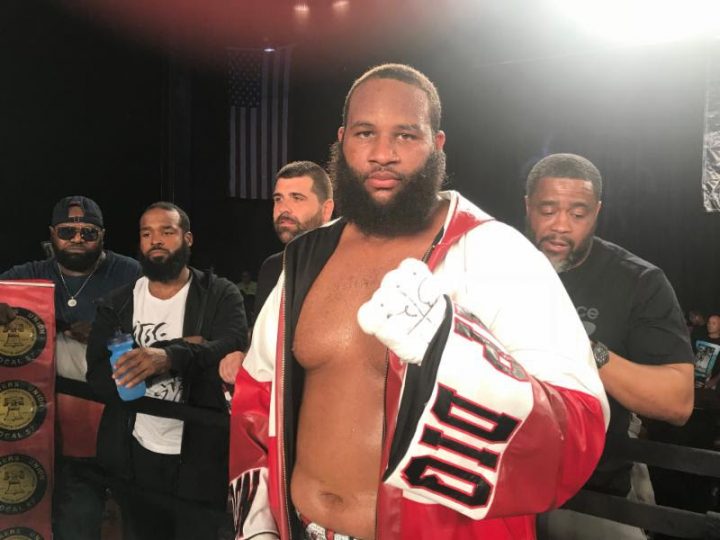 This past Saturday night, Darmani Rock remained perfect by stopping Pedro Julio Rodriguez in round four of a scheduled eight-round heavyweight fight that headlined a seven-bout card at The 2300 Arena in Philadelphia.

The action-packed card was promoted by Hard Hitting Promotions.

The card was seen by a world wide audience on Facebook Fight Night Live, and can be viewed in demand BY CLICKING HERE

Rock focused on the body early-on. In round four, Rock landed a hard right to the body, and left hook that sent Rodriguez to the canvas. Rodriguez got to his knees, and that was it as he took the ten-count at 27 seconds.

Cuevas was cut from around his left eye in the third round from an accidental headbutt. In was the right eye of Rodriguez that started leaking blood in the same round. Cuevas started putting his dazzling combinations together, but Rodriguez showed a good chin.

This was a solid learning experience for the 22 year-old Cuevas, as he fought an experienced foe and worked through adversity by having the cut.

Pizarro dropped Johnson three times in round two, and the bout was stopped at 2:21.

Rosa scored two knockdowns, and the bout was stopped.

NEWS:   David Adeleye back in action on Joyce / Takam undercard

Tapia dropped Marengo in round two with a right hand. Marengo did not beat the count at 2:02.

At the end of round three, Sinakin dropped Lara with a left hook.

Marcos Suarez and Israel Suarez battled to a four-round majority draw in a lightweight clash.

In round one, Marcos Suarez suffered a cut on his forehead.

HARD HITTING PROMOTIONS WILL RETURN TO THE 2300 ARENA ON FRIDAY, NOVEMBER 16TH. DETAILS TO BE ANNOUNCED SHORTLY