Christopher Diaz and Luis Lebrón in action on Nov.24 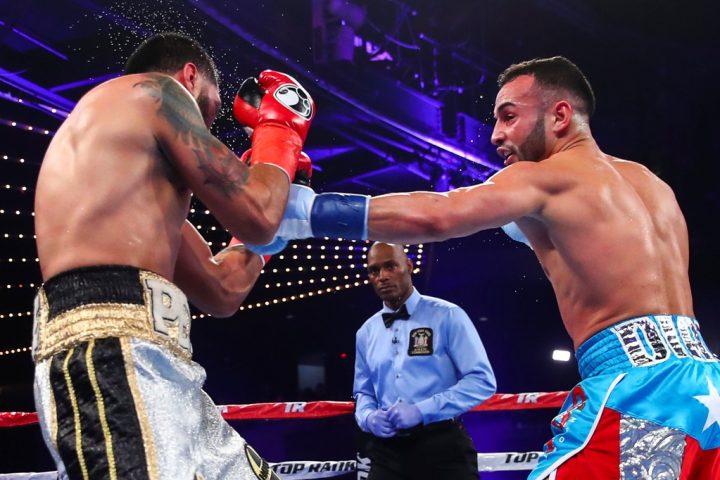 World challenger Christopher “Pitufo” Diaz will return to the ring “at home”, while the WBO Latino champion Luis “Popeye” Lebrón will defend his title in the main matches of the new edition of the series “Sabdo de Campeones en Casino Metro Boxing Nights”, which will be held on Saturday, November 24, at the San Juan Ballroom of the Sheraton Puerto Rico Hotel & Casino in San Juan, in a presentation of PR Best Boxing Promotions (PRBBP), in association with Top Rank and Spartan Boxing, which will be broadcasted on Wapa Deportes.

“We are back to the Sheraton Puerto Rico Hotel & Casino with the return of world ranked Pitufo Díaz after their world title fight, and Popeye Lebrón defending his belt at another great Casino Metro Boxing Nights event at the Sheraton Puerto Rico Hotel & Casino. Two world ranked fighters, Pitufo and Popeye, facing good rivals, looking to climb the rankings and get closer to world opportunities,” said Iván Rivera, president of PRBBP.

The main event of the night will feature the WBO #6 ranked at 130 pounds, Pitufo Diaz (23-1, 15 kos), against the Hungarian David Berna (17-5, 16 kos) at 10 rounds and 127 pounds. Diaz, a Top Rank company boxer, is coming off a unanimous decision defeat on July 28 in Kissimmee, Florida, when he faced the Japanese Masayuki Ito for the vacant WBO world title at 130 pounds. For Diaz, 23, it will be his first fight in Puerto Rico in 21 months.

“Again (I am) anxious to return to the ring, to the combat zone, always grateful to my family, my wife, my daughters, for the enormous sacrifice, the best support and my greatest strengths are for you. In July, more than a defeat, it was a teaching, we come stronger, with a new approach and a vision of being a world champion, I will be a champion, I promise you,” said the boxer.

In the co-feature, the 126-pound WBO Latino champion, Popeye Lebrón (13-0-1, 7 kos), will defend his belt for the second time when he faces Mexican Jose Luis Gallegos (16-5, 12 kos). Lebron, ranked #12 by the WBO in the featherweight, won by TKO over American Darryl Hayes on September 1 in the same venue in which he will fight on November 24.

“We are preparing to give another good demonstration and follow the route to a world championship, we are going to face a veteran rival, but we are working hard to overcome another test and move forward in my career,” said Lebrón.

The broadcast of “Saturday of Champions in Metro Boxing Nights Casino” will be live by Wapa Deportes.

More details of this program will be provided soon.