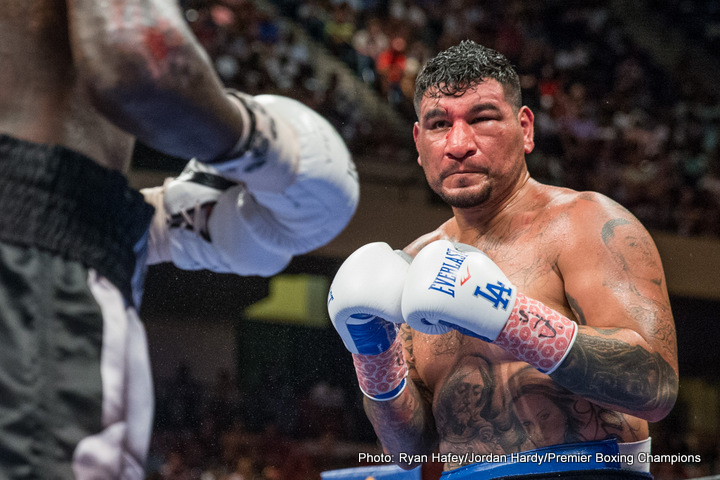 By Allan Fox: Former three-time heavyweight world title challenger Chris Arreola (36-5-1, 31 KOs) will be fighting on December 1 against an opponent still to be determined on the Deontay Wilder vs. Tyson Fury card at the Staples Center in Los Angeles, California.

The 37-year-old Arreola hasn’t fought in two years since losing to Wilder by an 8th round unsuccessful title challenge for his World Boxing Council heavyweight strap on July 16 in Birmingham, Alabama. Wilder fought with an injured right hand, which forced him to use his left hand for most of the fight. The 6’7” Wilder ended up using his left hand to dominate the shorter 6’3” Arreola until he quit in the 8th round.

No one has been mentioned as in the running for the fight, but there are many good opponents out there that would be perfect for Arreola to fight. A third fight against 39-year-old Bermane Stiverne would be an excellent choice, as would be heavyweight prospect Joe Joyce. Those two would make for an intriguing fight for Arreola.

With the Wilder vs. Fury card taking place in Los Angeles at the Staples Center, it potentially will help the event with Arreola fighting on it. The hardcore boxing fans are familiar with Arreola, and they’ll be interested in seeing him fight on the card. Luis ‘King Kong’ Ortiz would be a great choice as well for Arreola. It would obviously be tough for Arreola to face any of those three heavyweights given his two years out of the the boxing ring, but the upside would be tremendous. A win for Arreola over ‘King Kong’ Ortiz would vault him to the top of the rankings with the WBC and put him in position for a second world title shot against Wilder.

Arreola’s nearly two and a half year absence from the ring means he’ll likely be matched against a soft opponent on December 1. He can’t be thrown into the ring against a top tier fighter without the risk of him getting stopped once again.

During his 15-year pro career, Arreola has suffered losses to Vitali Klitschko, Tomasz Adamek, Bermane Stiverne [twice] and Deontay Wilder. Arreola has wins over Eric Molina, Travis Kauffman, Seth Mitchell, Nagy Aguilera, Manuel Quezada, Brian Minto, Joey Abell, Jameel McCline, Chazz Witherspoon, Travis Walker, Damian Wills and Malcolm Tann. Arreola has done a great job when facing quality opposition during his career. Arreola proved many times that he can beat the B and C-level heavyweights in the division. The problem is the wheels would come off the Arreola express every time he would step it up against a good top 15 heavyweight like Wilder, Klitschko, Stiverne and Adamek. Arreola’s lack of boxing skills and speed limited him in his career. If he had a little bit more power, he would have been able to overcome his lack of speed and boxing ability, but he’s never been a huge one-punch guy. In most of Arreola’s knockouts in his career, he needed to bludgeon his opposition slowly into submission to get KO. That sometimes worked for Arreola when he was put in against guys with flaws in their game and moderate punching power, but it didn’t work when he would face fighters with skills, size and power.