Cabrera-Mioletti and Scott to headline Battle at the Boat 118 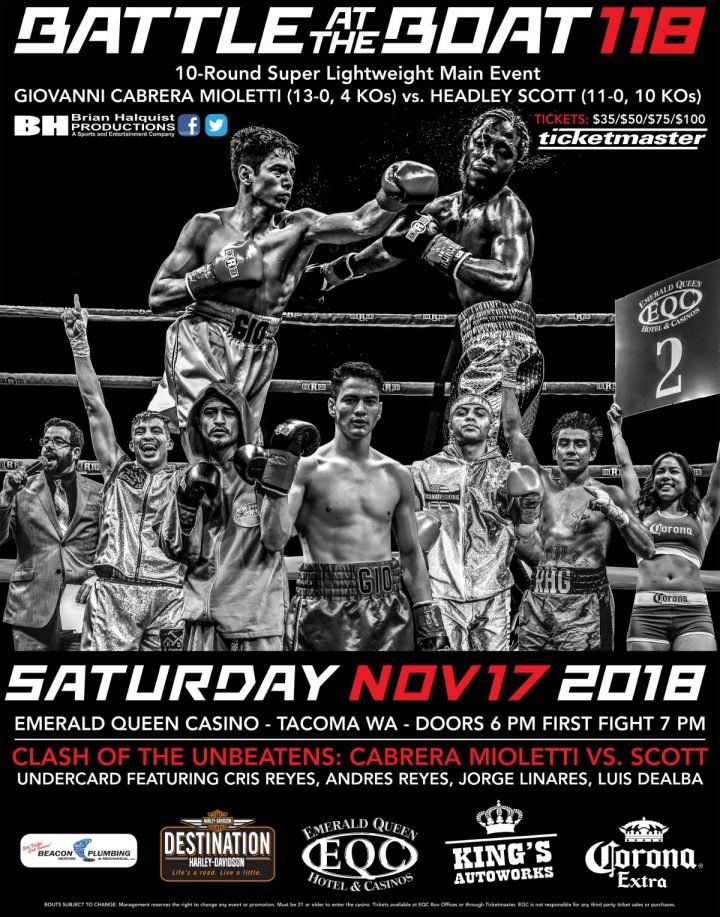 Giovanni Cabrera-Mioletti, one of the nation’s top super featherweight prospects, has made a habit out of handing fighters their first career defeat.

He will get another opportunity to play the role of spoiler on Nov. 17.

Cabrera-Mioletti will face knockout specialist and fellow undefeated boxer Headley Scott in the main event of Battle at the Boat 118 at the Emerald Queen Casino in Tacoma, Wash.

Cabrera-Mioletti, who is a native of Seattle, but now fights out of Chicago, brings a stellar 13-0-0 record with 4 triumphs coming by knockout into the 10-round bout. Scott sports an equally impressive 11-0-0 record with 10 wins by KO.

The six-bout card will also feature a pair of 5-round junior welterweight battles. With Jorge Linares facing Marco Cardenas and undefeated Cris Reyes squaring off against Andres Reyes.

“This is as good of a card as we have had at Battle at the Boat and we’re talking about a series that is 21 years old,” promoter Brian Halquist said. “Cabrera-Mioletti and Scott offer an incredibly intriguing main event between two rising undefeated fighters.”

Cabrera-Mioletti is a perfect 5-0 all-time against undefeated fighters. He defeated Gavino Guaman, who was 4-0 when the two faced off against each other on Oct. 1, 2016 in Chicago, to score his first win over an unbeaten boxer.

Cabrera-Mioletti defeated Lampkin by second-round TKO on March 27 before handing Pierce his first career setback by unanimous decision on June 8.

The 24-year-old Cabrera-Mioletti bested former world title contender Carlos Padilla by fourth-round KO on Sept. 8 at Battle at the Boat 117.

“Gio has gained a reputation for being a fighter willing to face anyone,” Halquist said. “You don’t see too many boxers these days that are fighting undefeated fighter after undefeated fighter, and you certainly don’t see one who is winning every one of those fights like Gio is. He’s a special talent.”

Scott, from Jonesboro, GA., has knocked out 10 out of the 11 fighters he has faced with five victories coming in the first round and three occurring in the second round.

In the undercard’s featured bout, Cris Reyes and Andres Reyes both bring exceptional resumes into their 139-pound battle.

Cris Reyes, a 2015 National PAL champion and National Golden Gloves’ runner-up, is a perfect 4-0, winning his last three fights by KO, including winning his last fight on Sept. 8 against Keith Wolf by second-round TKO.

Andres Reyes improved his career record to 8-3-1 by defeating Sean Gee by unanimous decision on the same card.

Linares, a teammate of Cris Reyes at Renton’s Tenochtitlan Boxing Gym, will attempt to get back in the win column following his loss at Battle at the Boat 117. Linares is 4-2-0 with 3 KOs, while the always game Cardenas is 6-7-1 with 2 KOs.

Additional undercard bouts include a 143-pound fight between Niko McFarland and Luis DeAlba, a 128-pound contest between Juan Gomez and Carlos Hernandez and 170-pound bout between Roman Avetisyan and Juan Jackson.

Battle at the Boat 118 will feature the VIP experience with 3rdRow Seats being discounted to $75 per ticket. All fans seated in in the VIP section (rows 1-3) will have an exclusive access point and a dedicated server to help create a true VIP experience.

Battle at the Boat 118 Card