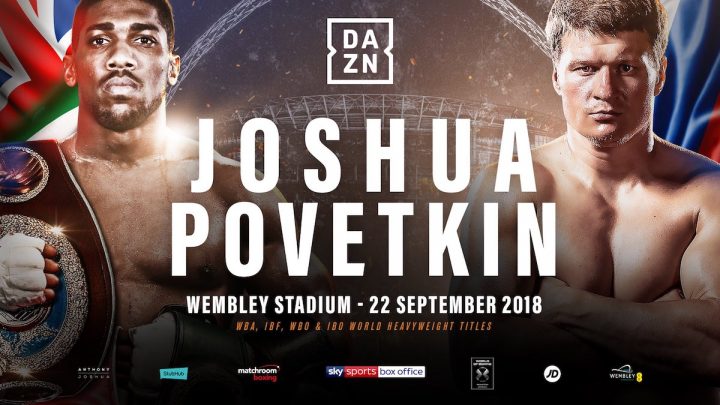 By Mike Smith: Dillian Whyte is hoping IBF/WBA/WBO heavyweight champion Anthony Joshua’s nose injury he suffered in his win over Alexander Povetkin last Saturday night won’t require surgery, because he’s hoping he can face him in seven months from now on April 13 at Wembley Stadium in London, England.

Whyte, 30, wants to be the one that faces Joshua next, even though it would be a retread fight for the British boxing public. Joshua already knocked Whyte out in 2015 in a one-sided fight. Apart from the 2nd round of that contest, it was dominated by Joshua.

Joshua (22-0, 21 KOs) picked up a big win last Saturday night with his 7th round stoppage win over the 39-year-old Povetkin (34-2, 24 KOs) in a fight that was hardly fought by both guys. The fight was even at the time that Joshua knocked Povetkin own in round seven and then put him away after he got back to his feet.

It’s good that Joshua knocked Povetkin out when he did because he was taking damaging blows from the Russian fighter. The longer the fight went the more it favored Povetkin because he wasn’t injured like Joshua was. Joshua’s promoter Eddie Hearn said that he was battling the flu this week. Coming back from the flu and dealing with an injured nose put Joshua at a disadvantage.

“Heavyweight boxing is a funny thing, who knows how bad the damage is to his [Joshua’s] nose, he may need surgery,” Whyte said to skysports.com. “But hopefully it’s me, I’m here and ready to rock.”

Joshua’s nose injury would need to be badly injured for him to be delayed in getting back into the ring by April 13 of next year. Joshua’s nose looked swollen after the fight from a big right hand that Povetkin hit him with in the 1st round. Povetkin fired a shot right down the middle that exploded on Joshua’s nose. From that point on, he had problems with it.

If Whyte is the one that Joshua fights on April 13, then it’ll be a failure on AJ’s promoter Eddie Hearn’s part in his inability to get WBC heavyweight Deontay Wilder to agree to take the fight. That’s about dollars and cents. Wilder wants the fight, and Hearn has the means to get him to sign, but he’s got to give him an offer that he’s willing to accept.

“Povetkin was going to be sharp early, but I thought AJ would stop him between five and seven rounds,” Whyte said.

Whyte is patting himself on the back for making a prediction that a lot of boxing fans were making about the Joshua vs. Povetkin fight. Fans were predicting a knockout win for Joshua for months ever since the news of the Povetkin fight was first announced. The 39-year-old Povetkin’s age made it clear that he was going to get knocked out at some point unless he got to Joshua’s chin. It was widely assumed that if the fight went to the scorecards, Joshua would win because he was fighting at home.

Kambosos: Teofimo’ Lopez is a dead boy once it goes past 3 rounds869 Total Shares

Jermall Charlo on Andrade and Benavidez: They have nothing to offer674 Total Shares