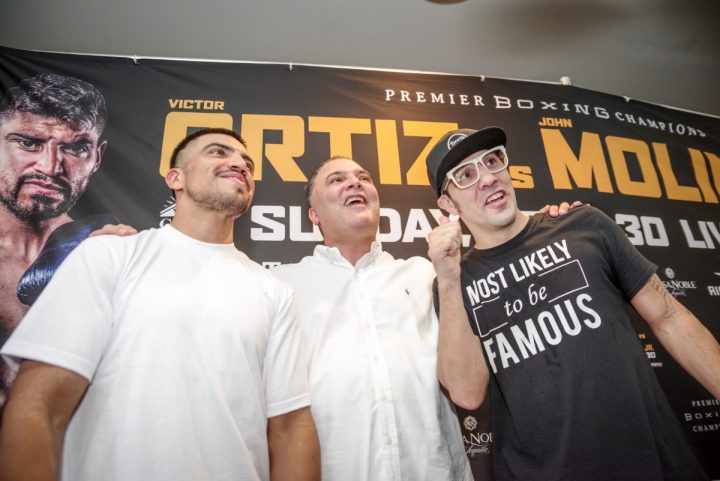 Former welterweight world champion Victor Ortiz and hard-hitting John Molina Jr. showed off their skills at a media workout Thursday as they prepare to face off Sunday, September 30 in the main event of Premier Boxing Champions on FS1 and FOX Deportes live from Citizens Business Bank Arena in Ontario, California.

The telecast begins at 9 p.m. ET/6 p.m. PT and features 2016 U.S. Olympian Karlos Balderas, who was in attendance at Thursday’s workout and faces New Mexico’s Jose Salinas, along with his brother Jose Balderas, who competes on the non-televised portion of the card.

Tickets for the event, which is promoted by TGB Promotions and Ringstar Sports, are on sale now and can be purchased at Ticketmaster.com.

Here is what the participants at the media event had to say Thursday from Fortune Gym in Los Angeles:

“John Molina Jr. is a warrior, and it’s going to be two warriors on fight night. This is another chance for me to do what I love to do and what I have the most passion in the world for.

“You have to keep that fire burning inside you to keep competing in this sport. You have to go in there 100 miles per hour. This is a sport and I’m going in there to destroy him, then we can go have lunch after.

“I have lots of respect for Molina, but this is still boxing. He’s in my way right now and I’m going to knock him out of the way.

“I have one big task ahead of me and that’s John Molina Jr. on September 30. I can’t focus on anyone else out there, as much as I may want to fight them. I have a tremendous challenge in front of me.

“I don’t feel that I have the size advantage. Molina is a big guy. I’m not too small or anything, but at the end of the day we’re going to have a good dance in that ring and there’s going to be no excuses.

“I’m working hard each day in camp to be ready for September 30. Whatever the coaches have been asking of me, I’ve been there and delivered.”

“I know that Victor is going to be himself in there. We’re both veterans who have been been down this road before. He’s coming to win and that’s what excites me. I think everyone watching is going to get a treat on September 30.

“Victor is probably the physically bigger guy because he’s been at welterweight longer, but I think I carry the weight well. I’ve always been big for my weight classes so I think it will fit perfectly.

“Training is what I do. I’ve been down this road before so it’s really just built into my system to get in the gym and work hard. Everything has been going great. We’re on track with some hard work ahead to be ready for fight night.

“Victor deserves my undivided attention and he has it. Especially for this fight. He is a big strong guy who hits hard for 147-pounds. I never pick the easy guy when I move up in weight. My first fight at 140 was Lucas Matthysse and I expect fireworks for this fight as well.

“My ability to bounce back and deal with adversity in the ring is all about mindset. When I’m in that ring, I’m just 100 percent focused on doing what I have to do for my family. I’ve been blessed by boxing. I put it all on the line.

“I know I have to go through the fire every time I get into the ring. If I didn’t think that I’d be fooling myself. You can say what you want about Victor, but he’s always been in exciting fights and I’m going to have to deal with that style on September 30.”

“I envision myself going out there and breaking down my opponent little by little. I think we’ve kept the same kind of training going, but me and my brother are much more comfortable as pros now, so it’s gotten even more productive.

“I’m excited to keep working and getting my rounds in, while also having fun with this job I’m blessed to have. I’m not planning to let this fight go the distance and I’m going to take the opportunity to end it when I see it.

“Me and my brother both believe that the fight is really won in the gym. By the time you get up into the ring, it’s just sparring really. That helps me stay relaxed and focused on the work I’m there to do and not worried about anything going on around me.

“I feel great going into this fight. I’ve learned a lot from each time I’ve gotten into the ring and I’m going to take that into this next fight to put on my best performance.

“My goal is always to go out there and be great. I’m ready to break my opponent down and do what I have to do.

“It’s exciting to be on the same card as my brother again. We definitely are still invested in each other’s fights. Hopefully we can each take care of business and be able to be there cheering each other on.”

“It’s refreshing to see the level of respect from Ortiz and Molina. This is an extremely evenly matched fight with no clear favorite. These are fighters who can create a memorable night. It’s the perfect example of how styles make fights.

“Both of these men know how to entertain and are must-see television every time they step into the ring. Now they’re fighting each other and it’s got war written all over it. The fans watching on Sunday night and here in Ontario are in for a treat.

“I’m excited to see the continued development of Karlos Balderas on September 30. He is quickly making an impression throughout the sport and I believe he’s going to prove that he can live up to the promise in the not too distant future. Sunday will be another step toward what he can really accomplish.”