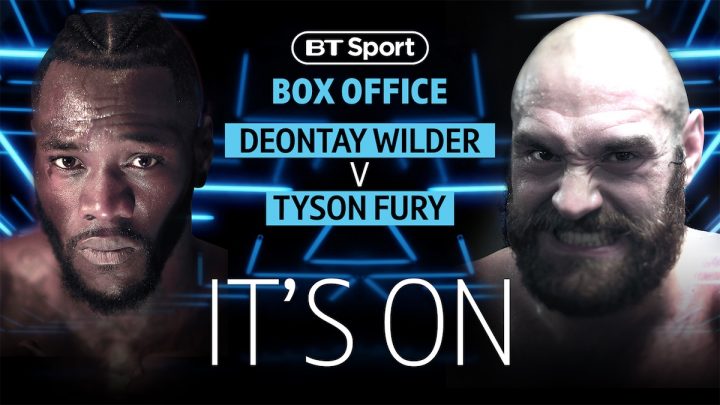 By Trevor McIntyre: Tyson Fury (27-0, 19 KOs) states that he’s inked his side of his contract for his December 1st mega-fight against WBC heavyweight champion Deontay Wilder (40-0, 39 KOs), and he’s now waiting for ‘The Bronze Bomber’ to sign his side of the deal to make it golden. Fury vs. Wilder could be staged at the Staples Center in Los Angeles, California. A tremendous undercard is being planned for the pay-per-view fight.

It’s too bad Fury didn’t have a camera on him while he was signing the contract. That would have made it a lot more real for the boxing fans that still doubt the fight won’t be taking place.

The timing of Fury announcing his signing of the contact is a little suspect, as he chose to announce it one day before IBF/WBA/WBO heavyweight champion Anthony Joshua’s fight against Alexander Povetkin on Saturday night at Wembley Stadium in London, UK. Is Fury trying to take some of the attention away from the Joshua-Povetkin match by announcing signing of his contract for the Wilder fight? If that’s the

Joshua’s promoter Eddie Hearn has saying this week that he still has doubts whether the Fury vs. Wilder fight will take place. Hearn still thinks it won’t happen because it hasn’t been announced. Is it jealousy and envy on Hearn’s part in continually doubting the Fury-Wilder fight will be taking place or does he truly believe the fight won’ happen?

The Wilder-Fury is said to be 99 percent done. The kickoff news conference is expected to take place soon to announce the fight to the boxing public. There’s too much money on the able for the fight not to take place.

Fury, 29, will get the last laugh when the Wilder fight is announced. All the doubters that thought the fight wouldn’t happen will need to eat some humble pie once the fight is a done deal. Fury will still need to win for him to be given mass credit. It’s not enough for Fury to fight Wilder. He needs to win the fight. Getting knocked out by Wilder won’t help Fury’s popularity with the boxing public.

There was negative talk a couple of weeks ago about Fury not having a boxing license to fight in the U.S, but he’s expected to get that done without any problems.