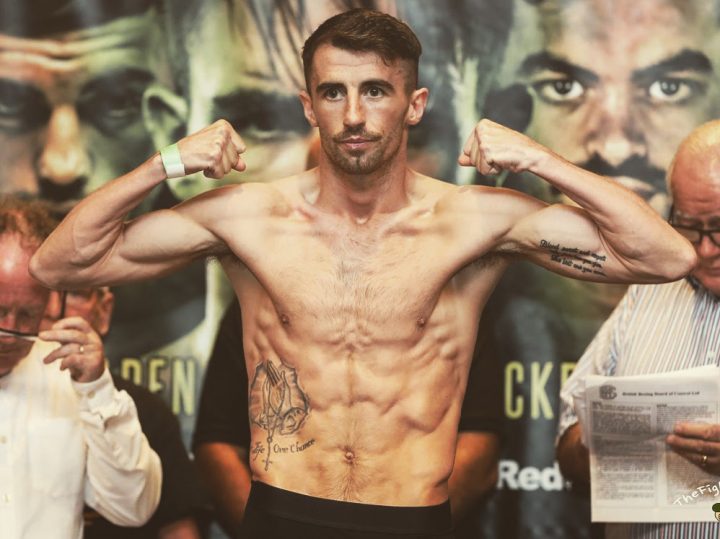 ‘White Chocolate’ (11-0-KO6) climbed off the canvas to cruise to the Celtic crown against Joe Ham last time out and is relishing the prospect of even more noise when he takes on Josh Kennedy for the WBO European belt at the Titanic Exhibition Centre on October 5.

McCullagh said: “I’m very lucky to have a great following from both Derry and Belfast. Everyone gets behind me when I fight and I’m very grateful for that.

“It should be a jam-packed arena and I’m relishing that. The atmosphere picks me up a level or two – I know that from the noise when I fought Joe Ham. There was no chance I wasn’t getting up!

“The noise carried me through the fight; especially in the later rounds. When you hear them, it really gives you a lift.”

As he prepares to take another significant step up in facing a fellow unbeaten fighter in Kent’s Kennedy (11-0-KO5), McCullagh knows he’ll need to keep improving if he’s to climb to the very top.

The 27-year-old southpaw said: “The belt means a lot to me but boxers always want bigger and better belts. It’s great to have it on the line but the main thing is a big step up in opponent. I feel ready.

“Winning the Celtic title was an unbelievable feeling but it’s just a minor title in the grand scheme of things. In boxing, you always want more. When I was young, I thought I’d be happy with a national title but once I’d done that, I wanted more and more.

“I’ve seen a few clips of Kennedy and he seems big and strong but I’m very confident in my own ability. You have to beat these kind of lads if you want to make it to the top.

“If I can’t beat Kennedy, I’m going to have to take a long, hard look at myself.”

Watch the action LIVE on BoxNation.

Scottish amateur sensation Reece McFadden is relishing the prospect of making his professional debut under the MTK Global banner.

The double Commonwealth Games medallist, who won a staggering 150 of 165 amateur bouts, attended the MTK Global show in Glasgow on August 24 and was excited by the atmosphere.

McFadden, 23, said: “It’s a cracking venue. It’s outstanding. I’ve come to support the boys who are fighting here tonight. Hopefully my venue will be here because I’m really looking forward to it.

“I’d like to move towards titles as quickly as possible. The flyweight division doesn’t have that many people in it but I’ll leave all that to my team. Whoever they select, I’ll say yes to anyone.

“I will fight anyone. It’s just a great feeling for me to be in that ring.

“Scottish boxing is growing and growing just now. It’s flying. Everyone and their granny are signing for MTK Global. It’s a cracking organisation.

“MTK Global is the place to be. It’s the best move I’ve made.”

The Welsh wizard (17-2-1-KO12) has recently switched trainer to Dominic Ingle and having returned from narrow back-to-back defeats to Liam Smith with a victory, is eyeing big prizes.

Ahead of his next assignment on MTK Global’s first ever show in Wales on Friday, Williams said: “Byfield is a disrespectful little weasel. I really don’t like him and if I can help it, I won’t give him the time of day – let alone fight him.

“He can go fight on his little shows because I’m chasing bigger things. This is a competitive sport and people are pitted against each other to try and prove they’re the best.

“I’m fully motivated again and I’m determined to prove to people how good I am. There are no specific targets – I just want to be in good fights and get back to being busy.

“It’s looking like a fight with JJ Metcalf (18-0-KO10) could be possible. I’m not being disrespectful or calling him out. I just want to be in good fights from now on and that’d be one.”

Fighting alongside him on the colossal show at Cardiff’s Vale Sports Arena will be MTK Global team-mates Sean McGoldrick and Jacob Robinson.

Williams signed for MTK Global in April two weeks after stopping Darryl Sharp on his return from his only two career defeats.