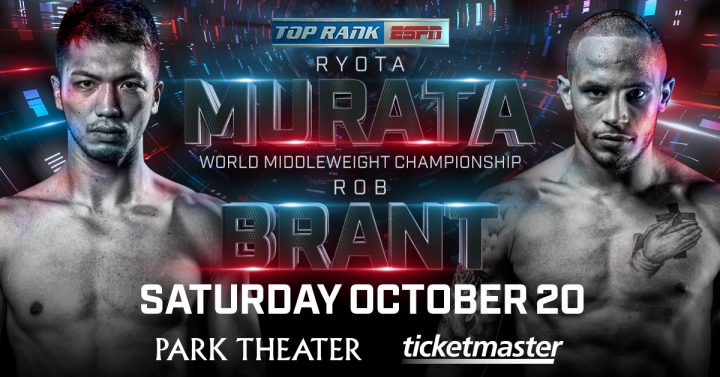 Japanese superstar Ryota Murata is taking his talents halfway around the world.

Tickets for Murata’s WBA middleweight world title defense against Rob “Bravo” Brant on Saturday, Oct. 20 at the Park Theater at Park MGM go on sale TODAY at 10 a.m. PST. The event is promoted by Top Rank, in association with Teiken Promotions and Greg Cohen Promotions.

Murata-Brant will stream live in the United States beginning at 7:30 p.m. PST on ESPN+ — the new multi-sport, direct-to-consumer subscription streaming service from The Walt Disney Company’s Direct-to-Consumer & International segment in conjunction with ESPN.

This is the second defense of the WBA title for Murata (14-1, 11 KOs), who won the belt with a dominating seventh-round TKO over Hassan N’Dam in October 2017. Five months earlier, N’Dam handed Murata his only professional loss via a highly controversial split decision. Murata left no doubt in the rematch and defended the title in April in Yokohama, Japan, knocking out Emanuele Blandamura in the eighth round.

A 2012 Olympic gold medalist, Murata is a sports icon in Japan, as the Blandamura fight drew a peak rating of 17 million viewers on Japanese TV. Brant (23-1, 16 KOs), from St. Paul, Minn., is undefeated when fighting as a middleweight and is the WBA No. 2-ranked middleweight in the world.

About Park Theater
The 5,200-seat Park Theater, with its cutting-edge audio and visual technology, provides artists of diverse talents with a dynamic space to create one-of-a-kind productions where every seat allows guests to feel up close and personal. From comedy shows and live concerts, to sporting events and award shows, the theater is specially designed to transform seamlessly for any occasion. For more Park Theater show and ticket information, visit ParkTheaterLV.com or follow on Facebook, Twitter and Instagram.

About Park MGM
Park MGM is the newest destination on the Las Vegas Strip, offering an intimate resort experience on a grand scale. A partnership between MGM Resorts International and New York-based Sydell Group, Park MGM features 2,700 guest rooms and suites, casually elegant design and a remarkable culinary program including Hogsalt Hospitality’s renowned Bavette’s Steakhouse; Juniper Cocktail Lounge; and South-of-France inspired restaurant Primrose. Park Theater, the resort’s entertainment destination, is a 5,200-seat venue home to special engagements by Bruno Mars, Cher and Lady Gaga, making her debut at the end of 2018. Park MGM is located in the heart of The Strip, next to the entertainment and dining neighborhood created by The Park and the 20,000-seat T-Mobile Arena. Additional developments at Park MGM will be announced as the resort experience unfolds throughout 2018. Park MGM is owned by MGM Resorts International (NYSE: MGM). For more information and reservations, visit ParkMGM.com, call toll-free at 888-529-4828 or follow on Facebook or Twitter.

About ESPN+
ESPN+ is the premium multi-sport, direct-to-consumer subscription streaming service from The Walt Disney Company’s Direct-to-Consumer & International (DTCI) segment in conjunction with ESPN. ESPN+ offers fans two exclusive, original boxing programs The Boxing Beat with Dan Rafael (Tuesdays, weekly) and In This Corner (twice monthly). In addition to exclusive Top Rank boxing content, programming on ESPN+ includes hundreds of MLB, NHL and MLS games, thousands of college sports events (including football, basketball and multiple other sports from more than 15 conferences), UFC (beginning in 2019), Grand Slam tennis, international and domestic rugby, cricket, new and exclusive documentary films and series, acclaimed studio shows and the full library of ESPN’s award-winning 30 for 30 films. Fans subscribe to ESPN+ for just $4.99 a month (or $49.99 per year) and cancel at any time.

Joshua worried about losing to Povetkin on Saturday »