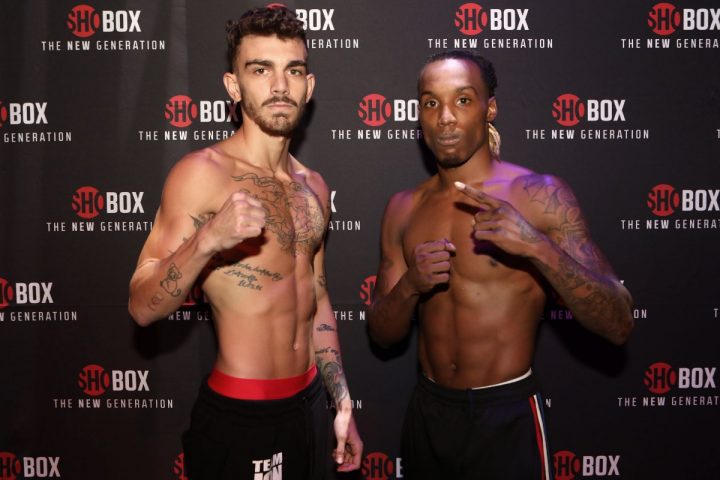 Top 130-pound prospect Jon Fernandez and former decorated amateur O’Shaquie Foster made weight on Thursday for their 10-round matchup in the main event of ShoBox: The New Generation tomorrow/Friday live on SHOWTIME at 9:45 p.m. ET/PT from Firelake Arena in Shawnee, Okla.

Fernandez (16-0, 14 KOs), a native of Spain and protégé of former unified champion Sergio Martinez, will face his toughest test to date in Foster (13-2, 8 KOs), a Houston resident who was one win away from representing the United States in the 2012 Olympics.

The telecast opens with James Wilkins (5-0, 5 KOs), who is featured on the SHOWTIME documentary CRADLE OF CHAMPIONS, squaring off against fellow-unbeaten Misael Lopez (8-0, 4 KOs). Staten Island’s Wilkins is a featured fighter in the documentary that chronicles the 2015 New York Golden Gloves, premiering at 8 p.m. ET/PT immediately preceding the ShoBox telecast.

“I think I’m ready for a title fight now. I think that we’ve been doing really good work and the time is coming. If I get the opportunity after this fight, I’ll take it. I would fight Tevin Farmer or Ryan Garcia. I’m ready for something bigger.

“Every fight is different. Some fights I need to be really busy and sometimes I need to bring the power. It all depends. I look at myself more as a volume puncher than a power puncher. I like to wear my opponents down round by round.

“I’ve been on SHOWTIME twice and I’ve knocked out both of my opponents. Tomorrow night I will make it three for three.

“I’ve seen a few of Foster’s fights. He’s a fighter that knows how to use his distance and move around a lot. He will be my toughest opponent to date but I’ve fought guys with a similar style before.

“Boxing is gaining popularity all the time in Spain and I hope that my success makes others in Spain want to start boxing.

“I think Foster is going to be faithful to his style and use his distance and move a lot. I’m going to have to attack him and close off the ring. I have to be really intelligent because Foster is a really good counter-puncher and he’s fast. I just have to go to work.”

“My focus has improved since I’ve started working with my trainer, Bobby (Benton). I’ve improved a lot and my consistency is there. I’ve sharpened up and gotten back to the old me. I had strayed from the way I like to fight and now I’m back to the real O’Shaquie.

“SHOWTIME hasn’t seen the best of me yet. I wasn’t focused my last few fights and I had some bad performances on ShoBox. I’ve gotten all of my demons and bad activities out and now I’m one hundred percent focused on my boxing. I know that once I’m focused, nobody can beat me.

“Fernandez is making a big mistake taking this fight. I’ve never had trouble fighting against tall guys. I just have to use a lot of feints and a lot of movement and I don’t see him troubling me.

“I feel like I have a good team in place. I’ve gotten older, I’ve matured, and I’m as focused as I have ever been. I’ve been in the gym consistently for the last year. After my last fight, I took a few days off and was right back in the gym. This is my fourth fight in less than a year and I’m coming off one of my best performances.

“I made some mistakes away from the ring. I had to pull myself out of it and I wasn’t going to allow my talent to go to waste. This is a big fight for me and I have to prove that I still have a great future in boxing.”

“Coming out of the amateurs, I knew I was going to make my mark in due time. I didn’t know if it would be this quickly. This is the whole goal. This is my first time on TV and I want to show my talent.

“Ramos knows how to box, he knows how to go in and out and use his angles, but I do see a lot of things that I can capitalize on. He does hold his right hand down low, and he likes to come over the top with an overhand left hand. He likes to stay out there, and he can get caught when he stays out there. I’m going to show him in the ring what he needs to work on in his craft.

“This is the toughest guy I’ve been in with as a pro. We know he’s lefty, we know he’s a pretty hard hitter. That’s pretty much all we know.

“I switch without even realizing, so fighting a southpaw won’t be a problem. I’m just so comfortable with it that it comes as second nature.”

“I’ve sparred hundreds of rounds with Jon Fernandez. I’m a very different fighter than JonFer. He’s a more come-forward fighter who attacks and tries to cut off the ring. I’m more of a technical boxer that tries to use the jab a lot.

“My style will all depend on how the fight flows. We have a plan to fight Irvin Gonzalez and we think it will be very effective tomorrow night.

“This is a good fight for my career and the type of fight that motivates me. I’m very excited for this opportunity and excited to be here in the United States. I think this will open up many bigger opportunities for me.”

“I’ve stayed busy in the gym since my last fight. I was in training camp with Robert Easter not too long ago. I had some ring rust in my last fight because of the layoff but that won’t be an issue this time.

“This is a big fight for my career. This is what’s going to get me to the next step in my career. I’m excited to show everybody who the real Wesley is.

“Switching up my stance is something that I can do and something that I’ve been working on. Sometimes I do it without even thinking about it, and in my last fight I was more effective as a southpaw. It’s all about understanding when is the right time to do it.

“My preparation for this fight has been perfect. I have absolutely no issues and you guys will all see the best Wesley Ferrer.”

“I feel good, I’m ready to go. I don’t know much about Ferrer. I know sometimes he switches to southpaw but we’re just going to adapt to whatever he brings to the table.

“I’ve sparred hundreds of rounds with Tevin Farmer. If I can hit him, I feel like I can hit anybody. That gives me the confidence to face a guy like Ferrer.

“I use my height to my advantage but I’m also learning to fight on the inside. I like to bang, but boxing comes naturally to me. Working with guys like Tevin makes these other fights easy.

“I’m going to be smart, stay patient, use my jab. But if an opening comes I’m going to take advantage of it and try to hurt him. As long as I stay focused and disciplined this will be easy work.

“This is my first time fighting on live TV, this is a great opportunity for me and an experience I’m looking forward to. I just have to take it round by round.

“It’s about being more focused. My mindset before was never, ‘I want to knock them out’. Now, that’s a priority for me. I want to hurt them.”

“When I touch him, I promise you I’m going to knock him out. I’ve been under his skin for six weeks. Now that the fight isn’t in his hometown he’s scared to look me in the eyes.

“He’s definitely my toughest (opponent). He’s young, he’s undefeated. He’s been hyped up in Denver. But, if you ask me, I don’t think nothing of him. Denver is not Brooklyn.

“I’m bigger, I’m smarter, I’m faster. Everyone I fought hasn’t been stopped until I stopped them. I haven’t fought a 130-pounder yet and now that I am, this fight isn’t going past three rounds.

“I want to be in the top 10. I want to be a rising star. I want to be a world champ by the end of 2020. But I had to take a different route than other fighters. I have my goals and this is the next step. I’m kicking this door down.

“I’m different than a lot of young fighters. My boxing IQ after working with Roy (Jones) is through the roof. I had a good camp. I’m prepared and ready to live my dream and become a star.

“I’ve been working three times a day in the gym. I didn’t fight guys with losing records because I was hand-picking guys. I fought them because I wasn’t given an opportunity.”

“At first Wilkins got under my skin a little bit on social media, but we blocked it out. He’s a hot head. I think within the first few rounds he’ll come out wild and he’ll be easy for me to counter. It’s going to work against him.

“I’ve seen guys who come out aggressive. I just need to catch him, slow him down and he’ll be out.

“No disrespect to him. He’s a great boxer, he had a great amateur career. But this is our opportunity to take the next step.

“I’ve gotten a lot smarter in each fight. I’ve learned to settle down and pick my shots. I can adapt to any style. I’ve had fights where I’ve had to brawl, I’ve had fights I had to box.

“We sparred with Shakur Stevenson and got some solid rounds with him for this fight.”