Groves vs. Smith: Gallagher – “Both have the power to end the fight with one shot” 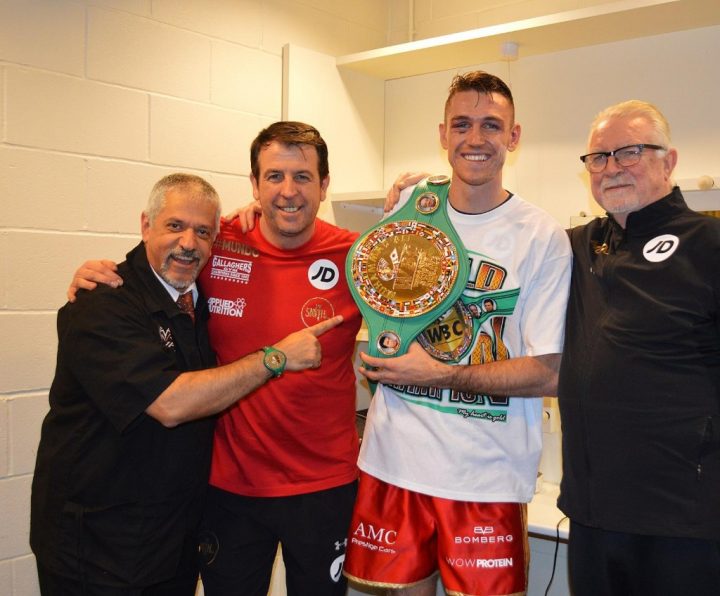 “On the night all will be unveiled,” said Joe Gallagher. “The thing with these two fighters; both have the power, both carry serious power. That’s what makes it exciting. One shot, that’s all it may take for this fight. I know everyone will say George is experienced, being there many times and Callum is the young kid coming through,” said Gallagher before adding:

“But in Callum’s pressure fights up to now, title fights, he has performed. There is something within Callum that comes out when his back’s against the wall.”

The experienced coach, voted Ring Magazine & UK boxing trainer of the year in 2015, talks with great respect of the opponent, George Groves, before the final in Saudi Arabia.

“I am a huge fan of George Groves,” said Joe Gallagher. “He is the boxers boxer, everyone likes him, what he has been through to get to where he is now. A mentally strong person, full praise and credit to him, I am a huge admirer of him and I have enjoyed watching his fights back studying for Callum Smith.”

Callum Smith booked his place in the final after defeating Sweden’s Erik Skoglund and Dutchman Nieky Holzken in the quarter-final and semi-final respectively. The WBC Diamond belt holder has his first shot at a World title after being in mandatory positions over the last few years, and like Groves, a unique chance to bring home the Muhammad Ali Trophy, The Greatest Prize in Boxing.

“This tournament, the World Boxing Super Series, is not like normal fights,” said Gallagher. “It’s like a World Cup, it’s like a Wimbledon. You don’t peak in your first fight, you don’t peak in your second fight. You have a game plan and a strategy to get through those fights and now we are in the final and this is where I expect Callum to peak and shine and I am sure George will as well so I am looking forward to a really good fight.”

Boxing fans in Jeddah and Saudi Arabia can buy tickets for the Final on Friday 28 September at the Indoor Sports Hall in Jeddah, Saudi Arabia via sauditickets.sa.

Fans in the UK can watch the George Groves vs Callum Smith Ali Trophy Super-Middleweight Final on Friday 28 September LIVE on ITV Box Office. Ringwalks for the final will be at 9.00 pm UK time.

David Price vs. Sergey Kuzmin this Sat. at Wembley Stadium »