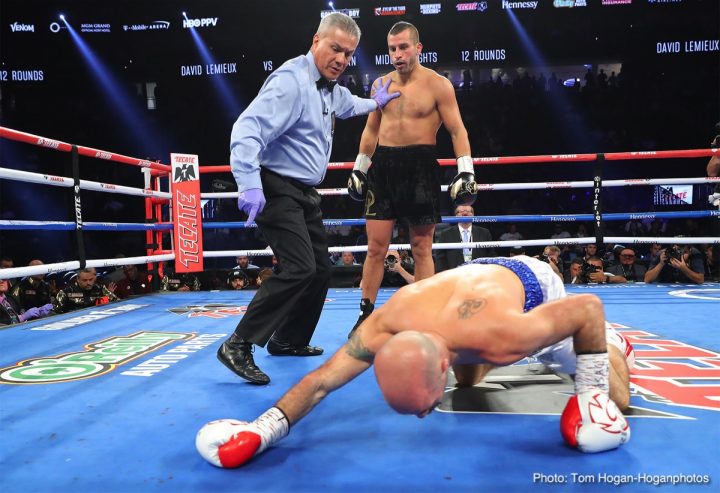 By Jim Dower: Former IBF middleweight champion David Lemieux (40-4, 34 KOs) completely obliterated Gary ‘Spike’ O’Sullivan (28-3, 20 KOs) in stopping him in the 1st round in a scheduled 12 round fight on Saturday night on HBO pay-per-view at the T-Mobile Arena in Las Vegas, Nevada.

Lemieux took advantage of a glacially slow left hook thrown by O’Sullivan to counter him with a monstrous left to the head that knocked him flat. The referee Russell Mora then stepped in and halted the contest. The official time of the stoppage was at 2:44 of round one.

Before the knockout, Lemieux, 29, was landing well to the body of O’Sullivan with tremendous body shots that had knockout written all over them. O’Sullivan made things easy for Lemieux by standing directly in front of him and not trying to use movement to keep away from him. Lemieux’s last two opponents Billy Joe Saunders and Karim Achour had both moved a great deal to keep away from him, but the 34-year-old O’Sullivan seemed to believe that he could hang with him by standing in front of him. It turned out to be a huge mistake on O’Sullivan’s part.

There was a lot of bad blood between Lemieux and O’Sullivan before the fight, as both guys had trashed talked each other. It got to the point where Lemieux was furious with O’Sullivan and he vowed to knock him out. At Friday’s weigh-in, O’Sullivan jumped into a fighter’s stance when it came time for the two of them to face off. Lemieux was highly upset with O’Sullivan doing that. He wanted to fight him right then, because he had caught him off guard with that move.

The victory for Lemieux puts him in position to get a fight against the winner of tonight’s fight between IBO/WBA/WBC middleweight champion Gennady Golovkin and Saul Canelo Alvarez. Lemieux has a better chance of fighting Canelo though, as he’s already fought GGG and lost to him in 2015 by an 8th round knockout in a unification fight. If Golovkin win tonight’s fight with Canelo, then he’ll likely go after WBO middleweight champion Billy Joe Saunders next. Canelo is the one that Lemieux has the best chance of fighting because he seems less interested in fighting Saunders and the dangerous guys like Jermall Charlo, Daniel Jacobs and Sergiy Derevyanchenko.

O’Sullivan received a big $400,000 payday for tonight’s fight against Lemieux. O’Sullivan had the chance to fight for a world title against Golovkin last May, but he turned it down. In hindsight, O’Sullivan should have taken that fight because it would have been better to lose to GGG than Lemieux, a non-champion. O’Sullivan’s paydays might drop off after this loss, as he needs to go back to the domestic level and fight guys that he has a good chance of beating.