Crawford: GGG beats Canelo if he goes to the body 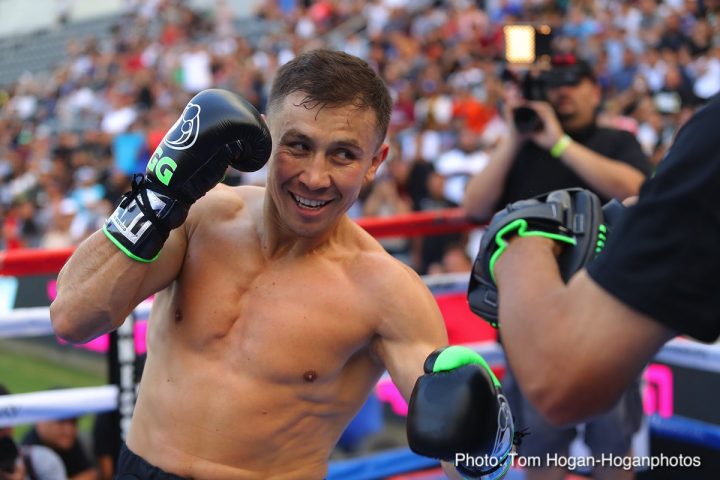 By Allan Fox: Welterweight champion Terence Crawford is picking Gennady Golovkin to defeat Saul Canelo Alvarez in their rematch if he goes to the body of the Mexican star. Golovkin didn’t throw body punches in the first fight with Canelo, and he instead targeted his head and missed frequently. Crawford thinks that Canelo can win if he stays off the ropes, he could get a decision.

Canelo and GGG will be fighting on September 15 on HBO pay-per-view at the T-Mobile Arena in Las Vegas, Nevada. The two fought last year in September in a fight that ended in a tie score with the judges scoring it a 12 round draw.

It’s likely that Canelo will fight on the ropes because that give him the ability to get a rest break, and then use the ropes as support to dodge shots and throw counters.

Golovkin will need to be willing to risk getting hit by Canelo’s counter punches if he wants to focus on throwing body shots. Golovkin at least will now have the confidence that he can take Canelo’s best power punches because he handled his power will in the first fight. Contrary to what a lot of boxing fans have been saying, Golovkin did land some nice body shots in the fight with Canelo last year, but he didn’t throw enough. If Golovkin had ignored Canelo’s head and focused entirely on throwing body shots, he might have knocked him out.

Canelo and his trainers know that Golovkin is going to be throwing a lot of body shots, so it’s quite likely that he’ll be on the run and will make it difficult for him to land to the body. Golovkin will be forced to throw to the head if he wants to hit Canelo with anything. Golovkin landed a few body shots in his first fight with Canelo, but he wasn’t committed to targeting that area of his body. I think this time GGG knows that he’ll find it easier if he throws body punches.

WBO welterweight champion Crawford (33-0, 24 KOs) is expected to defend his title on October 13 against Jessie Benavidez on ESPN+ in Omaha, Nebraska. Crawford won the World Boxing Organization welterweight title last June in stopping champion Jeff Horn in the 9th round in Las Vegas, Nevada. Top Rank wants to keep Crawford busy in order to build him slowly for a unification fight in the future against IBF welterweight champion Errol Spence Jr.

”I agree,” Jessie Vargas in agreeing with Crawford’s opinion that Golovkin will win if he throws body punches against Canelo in rematch. ”A lot of questions will be answered depending on how Canelo can take a shot from GGG, because a lot of people are doubting whether Canelo was using and was on illegal substances in the first fight. I think we’re going to be able to identify that. If Triple G attacks Canelo to the body early, he can hurt Canelo. If Canelo can learn how to outbox and stay away from the ropes, he can come out with a victory. It’s a 50-50 fight,” Vargas said.

It doesn’t matter what the outcome is for the Canelo-GGG2 rematch on September 15. It won’t prove whether Canelo used clenbuterol to prepare for his first fight with GGG. Boxing fans will suspect that

Canelo did use it, but they won’t be able to prove it by what happens in the rematch. That fight will prove Canelo is clean of drugs, as long as he tested negative.

”Triple G, because GGG is one of those guys that is very aggressive and he’s got good defense, but he’s got power in both hands,” said former heavyweight and cruiserweight world champion Evander Holyfield to Mayweather Boing Channel.

Holyfield likes the pressure style of fighting that GGG uses. It’s how Holyfield used to fight, so it’s not surprising that he’s picking Golovkin to beat Canelo. If Canelo was a pure slugger like Golovkin, then Holyfield might be choosing him to win the fight. Canelo does slug in some of his fights when he’s matched against guys that aren’t at his level, but he’s a different fighter when he’s facing punchers.

“GGG by 12 round decision,” former super featherweight champion Kevin Kelly said to Mayweather Boxing Channel. “I think he won he first one, and he’s going to win the rematch by decision, not by knockout.”

Kevin Kelly and Angel Manfredy both have Golovkin winning the rematch, but they also felt hat he won the first fight. There are a lot of boxing fans and former fighters that were more impressed with GGG last time he fought Canelo, because he was the one that was making the fight and doing the hard work. Canelo was only fighting hard briefly in each round, and leaving it up to GGG.

It says a lot that a high caliber fighter like Badou Jack is picking Golovkin to beat Canelo. It’s unknown if Jack has ever sparred with Golovkin, but he sees him as the guy that will win the fight.

“Golovkin comes to fight,” said super middleweight Ronald Gavril. “The only way he [GGG] wins he fight, he has to stop Canelo. If you don’t stop Canelo, you’re not going to get the decision. GGG by knockout, decision by Canelo,” Gavril said in making his prediction.

If Golovkin has to knock Canelo out in order to win the fight, then it’s going to be tough on him because we saw how Canelo went into survival mode the last time he fought GGG. Canelo fought like he was just trying to not get knocked out in many of the rounds. If Canelo came to win the fight, he would have stood and fought instead of using movement.

Boxing » Canelo Alvarez » Crawford: GGG beats Canelo if he goes to the body