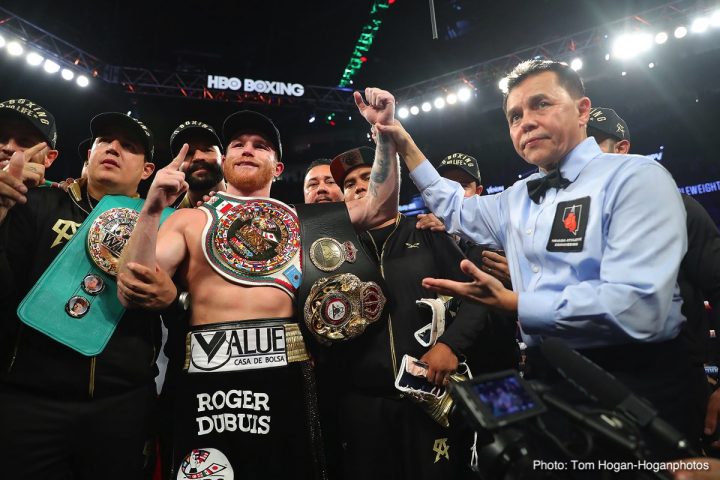 By Jim Dower: Saul Canelo Alvarez plans on fighting on December 15 following close 12 round majority decision victory over Gennady Golovkin last Saturday night, and his possible opponent s for the December date are Jermall Charlo and David Lemieux, according to his promoter Oscar De La Hoya. The network and the venue that Canelo will be fighting on also need to be still determined, states Dan Rafael of ESPN.

The 28-year-old Canelo has been with HBO for several years now, and his contract expired last Saturday with his rematch with HBO. De La Hoya will be looking around to see if there’s another network that Canelo could sign with if he doesn’t re-ink with HBO.

The opponent that many believe that Canelo will choose to fight on December 15, if he even fights on that date, is the 29-year-old Lemieux (40-4, 34 KOs). He’s signed with Golden Boy, and he has certain intangibles going for him that would make him an ideal opponent for Canelo to fight after his recent hard second fight against Triple G. Lemieux is a big puncher with a great record, and he’s a former world champion. Lemieux won’t be as much of a threat to beating Canelo as Jermall Charlo (27-0, 21 KOs), who is tall, powerful, fast, young and explosive. Charlo would be an opponent that could unseat Canelo, and that makes him the least likely option for Golden Boy to choose for Canelo to fight on December 15. It’s still not decided yet whether Canelo will be able to return to the ring in December because he has a cut that he needs to take care of before he can fight again.

“Canelo is coming off a tough fight. But that’s how disciplined and dedicated he is that he wants to fight again this year in December,” De La Hoya said to ESPN.com. ”[Lemieux] is definitely in the running, but nothing is for sure. Canelo wants to fight anybody.”

Golovkin, 36, isn’t in the running for Canelo’s December 15 fight, as his trainer Abel Sanchez wants him to rest until May of 2019 due to the punishment he took last Saturday. Golovkin suffered a cut and he was bruised around his face. Canelo was cut and bruised as well, but he wasn’t hit with as many power shots as GGG was. Most of the shots that Canelo was hit by were jabs from Golovkin. In the later rounds of the fight, Golovkin landed some extremely hard punches to the head of Canelo, but there weren’t many.

Canelo’s last fight with GGG was such a tough one that it’s difficult to perceive him fighting “anybody” as his promoter De La Hoya says. Golden Boy Promotions carefully decides who Canelo fights, and they don’t just put him in with “anybody.” If that were the case, they would have matched Canelo up against Golovkin when the Kazakhstan fighter was younger at 32 or 33 instead of waiting until he was 35 to make the fight. Charlo, 27, is not someone that Golden Boy can wait on for them to match Canelo. Charlo is Canelo’s World Boxing Council mandatory challenger at middleweight, and that fight is going to be ordered sooner or later. The WBC won’t make the Al Haymon-managed Charlo sit for five years without ordering Canelo to defend against him. The WBC isn’t expected to order Canelo to face Charlo in 2018. If Canelo keeps the WBC title rather than vacating it again, then the WBC will likely order him to face Charlo in 2019. Canelo probably won’t have to defend against Charlo until 2020 though, as Golovkin is expected to face Canelo in a trilogy fight in September 2019.

Canelo’s December 15 fight could take place at Madison Square Garden in New York, according to ESPN. This would be a surprise if Canelo were to fight in New York, because five of his last six fights have taken place in New York. Some boxing fans believe that Canelo is unbeatable by decision when fighting in Las Vegas due to the huge amount of money that he brings to the city each time he fights. The fans come in like a giant tide, spending lots of money in Las Vegas each time Canelo fights in that city. Over the years, Canelo has been involved in four controversial decisions fighting in Nevada in his two fights against Golovkin, Miguel Cotto and Erislandy Lara. A lot of boxing fans think Canelo should have lost all four of those fights. Golovkin is believed to have won the first fight with Canelo, and his second fight is seen as either a draw or a victory for GGG. Canelo fighting outside of Nevada in New York would be a welcome change and a good way for Golden Boy to show the boxing public hat he’s not reliant on the Nevada judges for him to win his decision fights.

Unfortunately for Canelo, a lot of people think he’s unbeatable by decision when fighting in Las Vegas. If Canelo can show that he can win outside of Nevada in New York, it would help prove to the fans that he’s not a pampered fighter who is given wins just so that he can continue to help the city of Las Vegas by bringing in fans/money each time he fights there. With the controversy of the first Canelo-GGG fight, Canelo should have fought the rematch against Golovkin in New York or another state so that Golden Boy could prove that he wasn’t getting preferential treatment by the judges. As things are right now, a lot of fans believe that the Nevada judges robbed Golovkin again, which has invalidated Canelo’s victory. Since a third Canelo-GGG fight won’t be taking place until 2019, it helps if Golden Boy takes Canelo away from the city that his two controversial fights with Golovkin has taken place. Fighting in New York would be a good idea, as that’s the location that Golovkin wanted to fight Canelo for their rematch. Rightly or wrongly, Canelo chose Las Vegas once again as the location for the rematch. If Canelo can show that he can win inside a city like New York, it would help dispel the notions that many boxing fans have that he can only win decisions in Las Vegas due to their belief that the judges give him preferential treatment.

Facing Lemieux won’t do as much for Canelo than fighting Charlo. However, it’s unlikely that Golden Boy will voluntarily have Canelo fight a dangerous guy like Charlo, because he has the kind of talent that would cause him problems. Lemieux is more up Golden Boy’s alley, and likely the only fighter that is seriously being considered right now for Canelo’s net fight. The other top fighters will all be either coming off of a fight or scheduled to fight. Lemieux is rated in the top five by the WBA and WBO. He’s ranked high enough by hose two sanctioning bodies for him to be viewed favorably as a good opponent for Canelo to fight by boxing fans on December 15. If the choice is Lemieux or no fight for Canelo on December, the fans would prefer to see the Mexican star in action on that date, even if it’s not the opponent they would like to see him fight. The fans want to see Canelo fight these guys: Charlo, Golovkin, Billy Joe Saunders, Sergiy Derevyanchenko, Demetrius Andrade and Danial Jacobs. Lemieux isn’t high on the list of guys that the boxing fans want to see Canelo fight, but he has a recognizable name with the casual fans, and he’s signed with Golden Boy.