Baranchyk and Yigit fired up for their Ali Trophy Quarter-Final in New Orleans Oct. 27 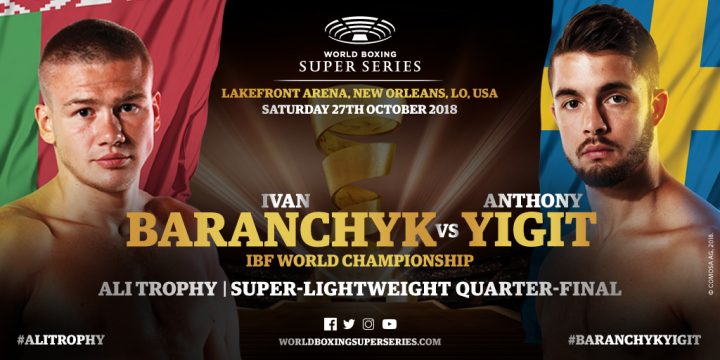 Belarus’ Ivan Baranchyk and Sweden’s Anthony Yigit are in an energized and excited state ahead of their Ali Trophy Super-Lightweight Quarter-Final at the U.N.O. Lakefront Arena in New Orleans, USA on October 27.

“If you step into the ring against Ivan Baranchyk, just know, you will never have an easy fight,” said 25-year-old Baranchyk (18-0, 11 KOs).

‘The Beast’ outlines big ambitions before the fight and intends to send a message to the other combatants in the 140 lbs edition of the World Boxing Super Series.

“I am a boxer with a warrior’s heart and mentality, and I will fight till the last drop of blood no matter what. On October 27, I will not only defeat Anthony Yigit, it will be an execution.”

“I am ready to fight and I will win this belt! I will show everyone that I am the best in the division.”

The vacant IBF World Super-Lightweight title will be contested between Baranchyk and Yigit in New Orleans on a doubleheader night that sees local hero Regis Prograis (United States) and Terry Flanagan (England) battle it out for WBC Super-Lightweight Diamond Title in the second Ali Trophy Quarter-Final.

27-year-old Anthony ‘Can You Dig it’ Yigit is eager to return to the ring after a succesful second defence of the EBU strap in december 2017, when he dominated former English Champion Joe Hughes and secured a decisive victory.

“I am looking forward to stepping into the ring again after almost a year of training hard and developing my skills,” said Yigit (21-0-1, 7 KOs).

“To fight on the WBSS and for the IBF world title is unreal! I’m so happy all those hours in the gym, the discipline outside the gym and all the blood, sweat and tears finally are giving results.”

The reigning European champion is in confident mood ahead of going to New Orleans, and he believes the timing is perfect in order to shine on the biggest stage of them all:

“I believe there couldn’t have been a better time for me to fight at the world stage and I can’t wait to show all the boxing fans that I belong there!”

Tickets for Baranchyk vs Yigit at the U.N.O. Lakefront Arena in New Orleans on October 27, start from $30 (plus fees) and are on sale now at TicketMaster.com.