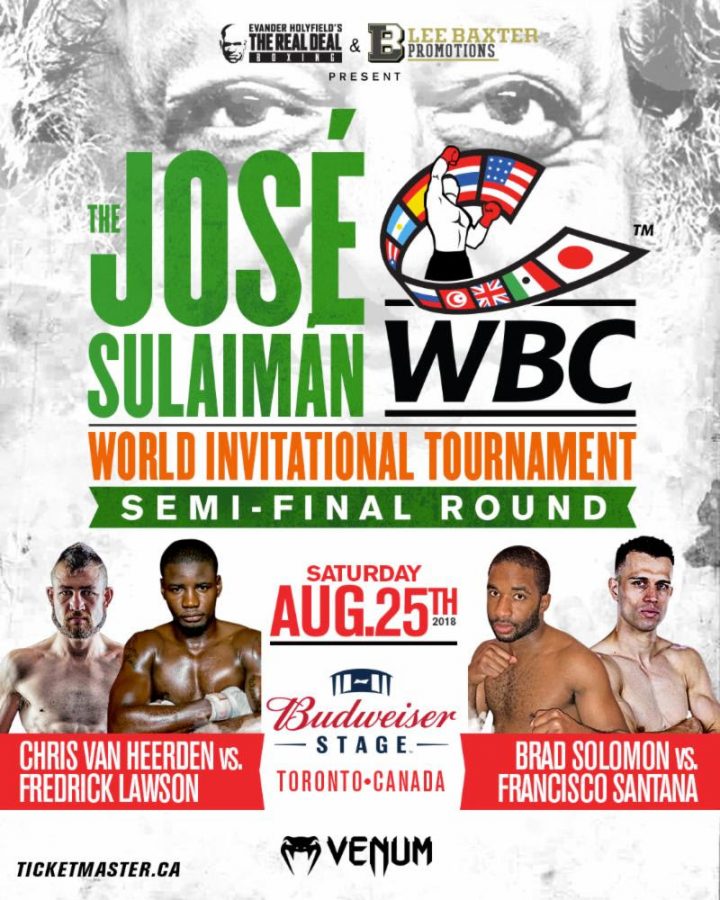 The Real Deal Boxing and Lee Baxter Promotions regret to announce that the Jose Sulaiman WBC World Invitational Tournament, scheduled to take place this Saturday, August 25th in Toronto, Canada, has been postponed due to visa issues.

“We were forced to make the very difficult decision late last night to postpone the event due to learning that, despite our best efforts, several of the tournament’s international fighters would not be granted visas to enter Canada.”, explained Eric Bentley, COO of The Real Deal Boxing.

“While we worked tirelessly to resolve the issue down to the last possible minute, and we could have made arrangements to move forward with revised tournament bouts, it was very important to us that the 4 semi-finalists, Van Heerden, Lawson, Solomon and Santana, not lose the opportunity they rightfully earned by winning in the quarter-finals due to issues out of their control.”

“We look forward to announcing the date and location of the rescheduled event in the coming weeks and we sincerely thank the boxing fans of Toronto for their support and their understanding of what was a necessary, but very difficult decision for The Real Deal Boxing and our partners at Lee Baxter Promotions to make especially considering the support the city has shown the event.”

Tickets can be refunded at the point of purchase.

Evander Holyfield’s The Real Deal Sports and Entertainment and Lee Baxter Promotions in association with Louisville Top Knotch and the World Boxing Council, are proud to announce that the semi-final round of The Jose Sulaiman WBC World Invitational Tournament will now take place at Toronto’s famed lakeside amphitheater, Budweiser Stage and tickets starting at $40

The gorgeous venue located on the banks of Lake Ontario which was voted “one of the best concerts venues in North America”, has played host to the world’s most popular musical acts since it’s opening in 1995 and now will hold it’s first boxing event in what will be one of the biggest cards to take place this summer in all of Canada on Saturday, August 25th.

Budweiser Stage (formerly Molson Ampitheatre) received international attention last year when it was the location for one of the dates on the press tour for the Floyd Mayweather vs. Conor McGregor fight. For the Jose Sulaiman WBC World Invitational Tournament the venue will have a similar set up with on stage ringside seating as well as covered amphitheater and outdoor lawn seating to create an end of summer fight party.

“From the media coverage of Holyfield’s visit last week, officially announcing that the WBC tournament is coming to Toronto, to the buzz on social media from Canadian boxing fans, we knew it was the right move to take the event to a special venue like the Budweiser Stage.”, explains co-promoter, Lee Baxter, president of Toronto based, Lee Baxter Promotions.

“In addition to the tournament’s semi-final fights, I plan on this being one of the best undercards I have matched in my entire promotional career. We are putting together a who’s who of Canadian fighters from prospects to contenders and putting them in competitive fights on the biggest stage of the career. We also have several events scheduled as well for the week of the fight to build up excitement in the city. This truly will be the boxing event of the summer in Canada, and, as the first boxing event to take place at such a legendary concert venue, it also be a historic night in Toronto boxing history.”

As 4-time heavyweight champion of the world, Evander Holyfield adds, “Visiting Toronto last week for the kick off press conference made it clear to us that the city is becoming a boxing hotbed. I was blown away by the interest and excitement the event is receiving from fans and the media in Canada. We’re also happy to work with such a forward thinking commission that will be honoring many of the new initiatives that we set for the tournament and are trying to bring to sport beyond this event. August 25th will be The Real Deal Boxing’s biggest show yet and together with our friends at Lee Baxter Promotions, we promise to provide an action packed night at a truly incredible venue.”

The Jose Sulaiman World Invitational Tournament, named after the late president of the WBC, is a single elimination bracket style tournament created by The Real Deal Boxing where 8 high level welterweights, representing different countries, compete over the course of three events to declare one winner who will be in position to fight for the WBC World Welterweight Title in 2019.

Besides the exciting action in the ring, the Jose Sulaiman World Invitational Tournament is receiving glowing praise from fans, media and athletic commissions for the initiatives it’s taking to make long overdue changes in the sport in three distinct categories.

To combat one of boxing’s biggest issues, inexplicable if not downright awful judging and scorecards, the tournament features 5 judges as opposed to the regular 3. One for each side of the ring as well as one judge who watches the fight on a monitor with no sound. Halfway through the fight, scorecards are announced to the audience and the fighters so everyone is aware of how the 5 judges are viewing the bout. The first round of the tournament did not have a single controversial decision in 5 back to back 10-round fights and several fights had distinct momentum shifts after the cards were announced at the half way point. The Real Deal Boxing also developed a standardized scoring system that is given to judges in advance which clearly defines the way a round should be scored to eliminate any subjectivity from the equation. Last but not least, any bouts that end in a draw immediately head to a 11th and final round that judges must give to one of the fighters.

A nearly universal request from fighters, fans and the entire boxing community, the tournament uses instant replay. In the case of a controversial or potentially wrong call, the incident in question is reviewed in between rounds, allowing officials to get it right every time. Instant replay helps assure the bout’s outcome and scorecards are never affected by a missed call, be it a slip ruled as a knockdown or a cut from an accidental headbutt ruled as punch or vice versa.

In the tournament’s first round fighters were required to undergo a pre fight MRI and post fight MRI (on the following day of the fight) regardless of the bout’s outcome. In addition, The Real Deal Boxing has it’s own internal team of physicians to oversee the health and safety of all the fighters on their roster, helping to address the inconsistent medical standards brought on by differing requirements from each regulatory authority. The expense of these additional medical and safety requirements is covered entirely by The Real Deal Boxing.