Mansour vs Hrgović September 8 in Zagreb 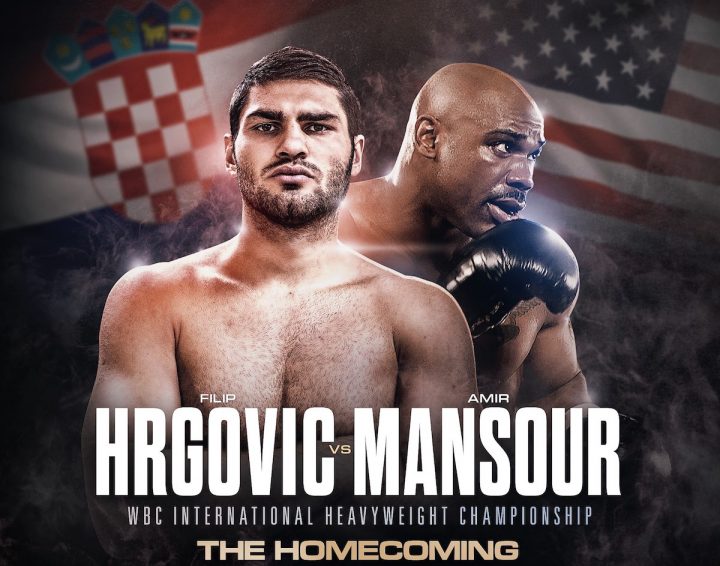 Despite the change of opponent, Hrgović remains focused on victory, and while the Rio 2016 Olympic Bronze Medallist admits he will have to alter his preparations to fit his new foe, the 26 year-old is motivated land his first major title.

“I haven’t had much time to study Mansour yet,” says Hrgovic. “I know he’s a southpaw and slightly shorter than my original opponent so I will have to alter my training accordingly, but as I always say, you have to be able to beat anyone if you want to become World Champion.

“The technical and physical aspects of my preparations will remain the same. I have to be prepared for a tough fight against someone who will definitely have a lot of motivation to put me down.

“I never want to rank boxers so I will not say whether this is a tougher test, but Mansour being better ranked internationally with a lot of experience definitely make him a serious threat.

“I believe Mansour will be motivated to show his value by beating me and claiming the WBC International belt. That being said, I will not let him grab that chance. It will be two great champions fighting hard on September 8 to gain the respect they deserve.”

A full undercard showcasing many of Croatia’s top boxing talents will be announced in the coming weeks. Tickets for the Zagreb Fight Night on September 8 featuring Filip Hrgović vs. Amir Mansour start at 110 KN and are available online via www.eventim.hr.

Habazin the former IBF Welterweight World Champion, who was involved in a historic unification fight with female pound-for-pound star Cecilia Brækhus in 2014, travelled to Vienna, Austria in March to claim the IBO World Middleweight title with a fifth-round technical knockout win over Elene Sikmashvili.

“It was make or break for me,” reveals Habazin. “I decided that if I did not win that fight, I would pursue other avenues outside of boxing. This motivated me to do my best and win another World title. It meant everything to me because I put everything on the line, that victory also cemented in me the belief once more that I can be the best female boxer ever.”

Habazin now returns home for a huge fight night in the Croatian capital where she will defend her IBO World title against Ghana’s Gifty Amanua Ankrah, and the 28 year-old is promising a spectacular performance for the fans at the Arena Zagreb.

“The pressure to perform in front of my hometown supporters is very large, but I welcome any challenge,” she says. “I am using this pressure as motivation to give my fans and supporters the best fight they have ever seen from me.

“It’s a massive honoir and source of motivation to fight at home, but, when the bell rings, I am no longer in my hometown, I am in the ring and all my focus is inside the ring. My goal is to beat anyone and everyone who enters the ring with me including Cecilia Braekhus. When I get my rematch with her I will prove to everyone that I am the best female boxer.”

Habazin was originally scheduled to fight on August 26 in South Africa but an elbow injury forced her to withdraw from this contest. However the Zagreb-boxer has benefitted from a tough training camp with renowned coach James Ali Bashir.

“For this fight I’ve had my most grueling preparations yet,” she says. “Training in South Africa at Visser professional boxing training camp for 2 months at 2000 metres above sea level with my new coach James Ali Bashir.

“We worked daily and he helped me reach new heights in my boxing. His passion for the sport is infectious and every time I train with him I feel a hunger and motivation to become the best female boxer the world has ever seen. Currently, I have a small elbow injury, but it will be healed within the next days and I will be ready for this fight.”

At just 19 years of age, Kozin’s has already compiled an impressive resume. She is a former WBF World titleholder, who will enter the ring at the Arena Zagreb following back-to-back victories over former IBF World Champion Eva Bajic.

“This will be another exciting addition to our fight card,” said Promoter Nisse Sauerland, for Team Sauerland. “Fans at the Arena Zagreb can now look forward to three title fights plus a stacked undercard that we will announce shortly.”

Zeljko Karajica, CEO of 7Sports, the sports unit of the ProSiebenSat.1 Group and Managing Director of the operating event agency MMP Event GmbH, says: “With ticket prices starting at just 110 KN, we are offering great value for money. There will be up to ten fights featuring three championship contests and the very best of Croatian boxing.”

Tickets for the Zagreb Fight Night on September 8 featuring Filip Hrgović vs. Amir Mansour start at 110 KN and are available online via www.eventim.hr.